ATHENS -- A common fallacy pervades coverage by the world's media of the negotiations between the Greek government and its creditors. The fallacy, exemplified in a recent commentary by Philip Stephens of the Financial Times, is that, "Athens is unable or unwilling -- or both -- to implement an economic reform program." Once this fallacy is presented as fact, it is only natural that coverage highlights how our government is, in Stephens's words, "squandering the trust and goodwill of its eurozone partners."

But the reality of the talks is very different. Our government is keen to implement an agenda that includes all of the economic reforms emphasized by European economic think tanks. Moreover, we are uniquely able to maintain the Greek public's support for a sound economic program.

So, if our government is willing to embrace the reforms that our partners expect, why have the negotiations not produced an agreement? Where is the sticking point?

The problem is simple: Greece's creditors insist on even greater austerity for this year and beyond -- an approach that would impede recovery, obstruct growth, worsen the debt-deflationary cycle and, in the end, erode Greeks' willingness and ability to see through the reform agenda that the country so desperately needs. Our government cannot -- and will not -- accept a cure that has proven itself over five long years to be worse than the disease.

Our creditors' insistence on greater austerity is subtle yet steadfast. It can be found in their demand that Greece maintain unsustainably high primary surpluses (more than 2 percent of GDP in 2016 and exceeding 2.5 percent, or even 3 percent, for every year thereafter). To achieve this, we are supposed to increase the overall burden of value-added tax on the private sector, cut already diminished pensions across the board; and compensate for low privatization proceeds (owing to depressed asset prices) with "equivalent" fiscal consolidation measures.

The view that Greece has not achieved sufficient fiscal consolidation is not just false; it is patently absurd. The accompanying graph not only illustrates this; it also succinctly addresses the question of why Greece has not done as well as, say, Spain, Portugal, Ireland or Cyprus in the years since the 2008 financial crisis. Relative to the rest of the countries on the eurozone periphery, Greece was subjected to at least twice the austerity. There is nothing more to it than that. 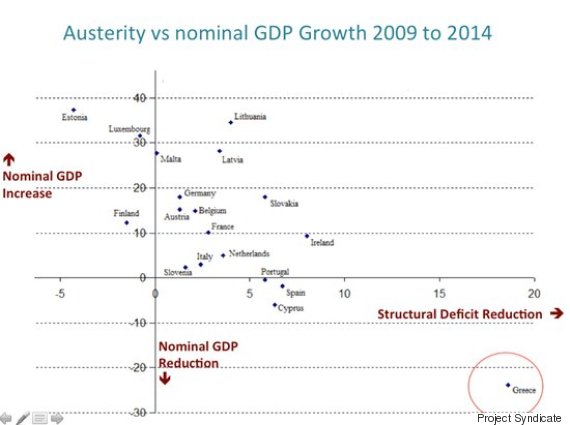 Following Prime Minister David Cameron's recent election victory in the United Kingdom, my good friend Lord Norman Lamont, a former chancellor of the exchequer, remarked that the U.K. economy's recovery supports our government's position. Back in 2010, he recalled, Greece and the U.K. faced fiscal deficits of more or less similar size (relative to GDP). Greece returned to primary surpluses (which exclude interest payments) in 2014, whereas the U.K. government consolidated much more gradually and has yet to return to surplus.

At the same time, Greece has faced monetary contraction (which has recently become monetary asphyxiation), in contrast to the U.K., where the Bank of England has supported the government every step of the way. The result is that Greece is continuing to stagnate, whereas the U.K. has been growing strongly.

Fair-minded observers of the four-month-long negotiations between Greece and its creditors cannot avoid a simple conclusion: The major sticking point, the only deal-breaker, is the creditors' insistence on even more austerity, even at the expense of the reform agenda that our government is eager to pursue.

Clearly, our creditors' demand for more austerity has nothing to do with concerns about genuine reform or moving Greece onto a sustainable fiscal path. Their true motivation is a question best left to future historians -- who, I have no doubt, will take much of the contemporary media coverage with a grain of salt.

Austerity Is the Only Deal-Breaker
Strikes In Greece 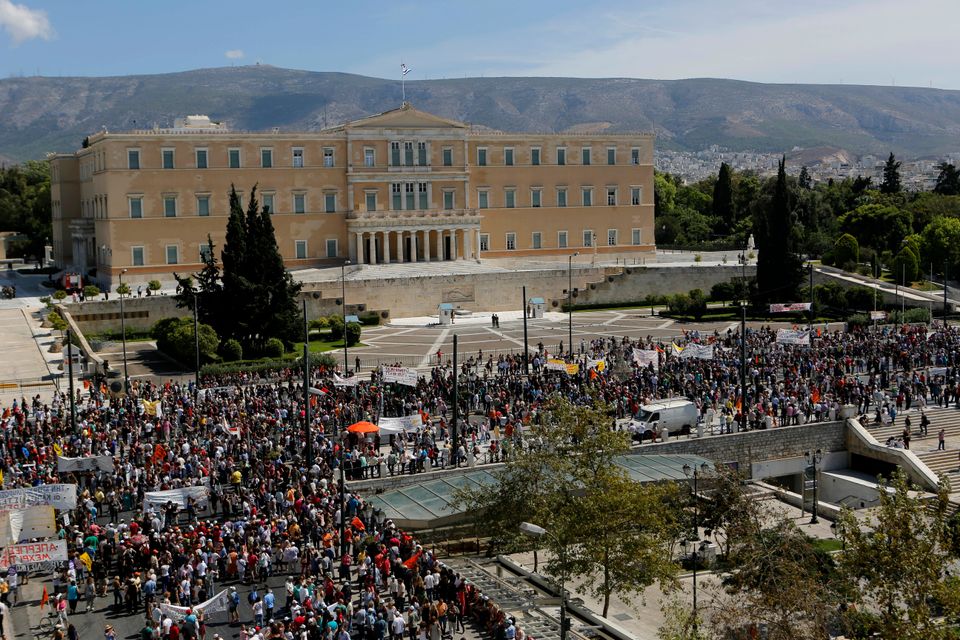