Negotiators are working in Brussels this week to reach a deal on Greece's worsening debt crisis. Meanwhile, across Greece, banks are closed and capital controls are in place, forcing citizens who have struggled through years of economic strife to deal with even tougher times.

On June 28, a week ahead of a crucial referendum on a bailout proposal from creditors, the government announced that banks would be closed and limits placed on money transfers and withdrawals. Since then, Greeks have been subject to a bevy of restrictions on what they can do with their money, which has wider reverberations on the country's society and economy.

These capital controls have been in place for just over a week now, and Greece's Deputy Interior Minister George Katrougalos announced on Tuesday that it will be technically impossible to reopen banks this week. 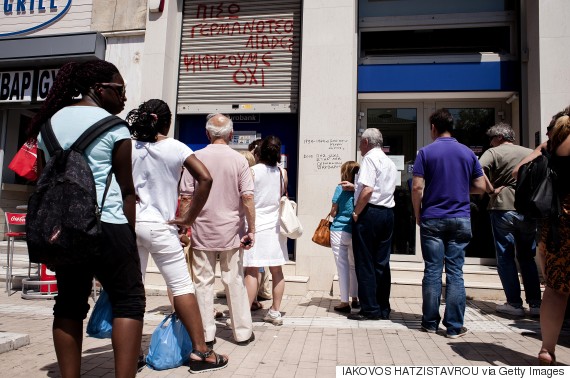 In lieu of banks operating, Greeks must get their cash through ATMs, but the new capital controls limit withdrawals to 60 euros. The restrictions have led to long lines and some machines running out of funds entirely.

The forced reliance on ATMs causes obvious problems for Greeks who don't own debit cards, many of whom are elderly. Banks temporarily reopened last Wednesday to give those pensioners who lacked cards a 120-euro disbursement for the week, resulting in scenes of desperate seniors crowding into branches to get their funds.

“I don't have a clue what will happen if banks don't open soon," 71-year-old pensioner Vasiliki told The WorldPost in Athens. "I got 120 euros last week and paid just for my food. I don't even have a cash card -- didn't know I was going to need one."

"I haven't been very familiar with technology," he added. "I don't know how to find out about news developments. What if banks stay closed? I don't have children or close relatives to feed me."

One heavily circulated image taken last Wednesday showed 77-year-old Giorgos Chatzifotiadis crying from exhaustion and exasperation after he was turned away from four banks while trying to collect his wife's pension. 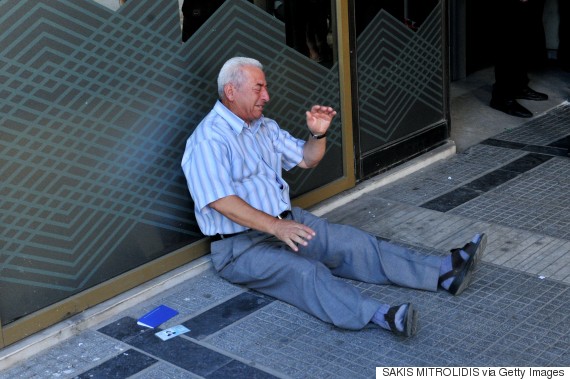 In addition to the daily ATM limits, Greeks are also unable to electronically transfer any money out of the country without government approval. Those who need to send money abroad for emergencies like medical issues may find reprieve, though they face a review process. The measure is intended to prevent a massive flight of capital, but many of the side effects are severe.

The stoppage of transfers has huge implications for businesses that rely on foreign suppliers for their products. Greece imports over half its food and raw materials, but local companies now lack the ability to transfer money abroad to purchase those imports, according to The Guardian.

One industry that's been especially affected is Greece's important olive oil trade. Because of the crisis, farmers have been demanding to be paid in cash, but distributors don't have enough money to do that. Now, the situation is at an impasse as businesses also worry about running out of the imported bottles and caps used in production.

In addition to foodstuffs and associated materials, Greece also relies on imports to obtain medical supplies. Pharmacies have reported shortages of drugs, and hospitals are said to be in similar straits. Drug companies have promised to continue to supply Greece, despite being owed more than a billion euros by the government.

Many supermarkets have been almost cleared out, as Greeks fearing financial collapse stocked up on essential goods ahead of the referendum. 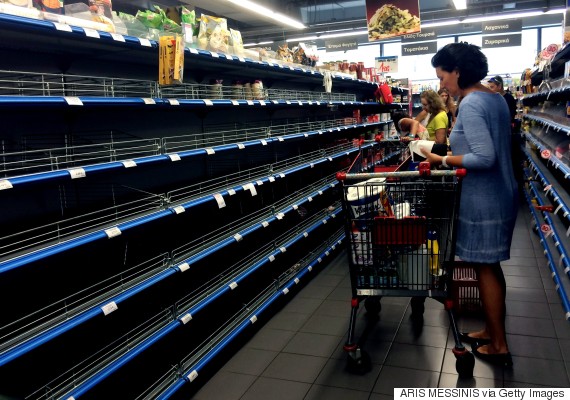 While increased demand for necessities has caused runs on food and medicine, people seem to have given up on buying nonessential goods. This means many stores have struggled as business slows to a halt, causing further economic woes.

Internet services that require transferring funds outside the country, such as buying a song on iTunes, no longer work. Money transfer companies such PayPal and cloud storage services aren't functioning either, causing issues for some Greek tech companies. 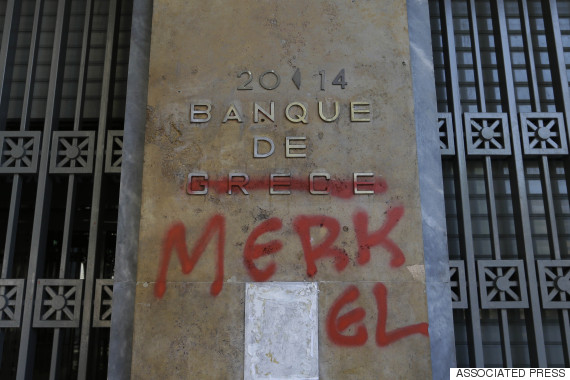 The controls have hit Greeks outside the country as well as those within it. Travelers have had their credit and debit cards declined while abroad because of money transfer restrictions, finding themselves cut off from cash. One couple honeymooning in New York discovered they were effectively broke after their cards bounced, and eventually received help from a journalist and the Greek Orthodox Church.

Tourists visiting Greece have also faced problems. Although the daily limits don't apply to foreign nationals, closed banks and cash-strapped ATMs still pose obstacles. Greece's tourism industry is a vital part of its economy as well as a huge source of jobs, and any potential damage to the sector would be disastrous. 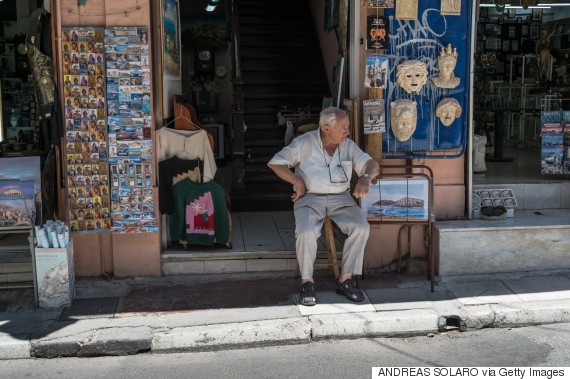 Greece is currently meeting with its European creditors to try to agree on a bailout package that will allow the country to pay the billions it owes in debt and stay in the eurozone. A decisive "No" vote in Sunday's referendum gave Greek Prime Minister Alexis Tsipras popular backing to attempt to negotiate a bailout deal with less stringent austerity reforms. Creditors now says it's on Tsipras to present a workable deal, and a crucial summit scheduled for this Sunday could decide the country's fate.

If no agreement can be reached, Greece will rapidly run out of cash and may be forced to leave the eurozone. For some Greeks, though, there is a sense that tough times are ahead, whatever the outcome.

“Who can tell what will happen?" Katerina, a 32-year-old shop assistant, told The WorldPost in Athens. "If we exit, it's a disaster. If we stay in the EU on such terrible conditions, it's slow death."

"I don't think this debate matters anymore," she said. "We have to prepare for the worst case scenario, for all eventualities."