In January, Alexis Tsipras and his Syriza party rode a current of anti-austerity sentiment to a resounding victory in Greece's national elections. Tsipras -- now Greece's prime minister, one of Europe's youngest leaders and a charismatic voice for the left -- promised better terms on the nation's bailout deal and an end to what he called a "vicious cycle of austerity."

Five months after the vote, Greece is now in a state of crisis as banks close and capital controls prevent citizens from withdrawing more than 60 euros a day at ATMs. The situation stems in part from the failure of this year's long and contentious negotiations between Greece and its creditors, the so-called "troika" of the International Monetary Fund, the European Central Bank and the European Commission.

Greece and its creditors could not reach a deal to unlock the 7.2 billion euros in bailout funds that the country needed to pay back 1.6 billion euros of debt to the IMF by a Tuesday deadline. 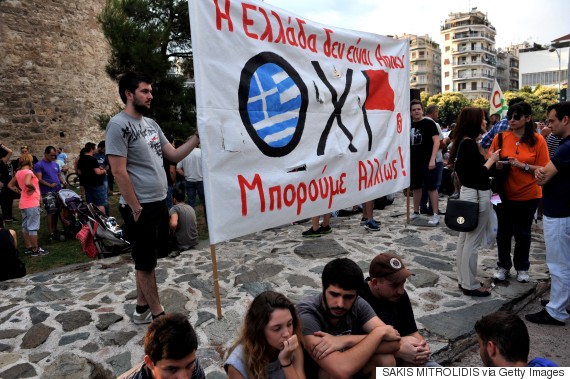 Supporters of the "no" vote in the upcoming referendum hold a banner reading "NO, we can otherwise" during a gathering under the White Tower in Thessaloniki, Greece, on June 29, 2015. (SAKIS MITROLIDIS/AFP/Getty Images)

Throughout months of talks, Tsipras has held a hard line against the harsh economic reforms and austerity cuts that the creditors have demanded in exchange for the funds. The result has pushed Greece to the brink of financial collapse, with an exit from the eurozone now a very real possibility.

Tsipras' critics have accused him of showing little willingness to compromise in the talks. "Whenever the ideological, radical people lead the debate it leads to nothing," European Parliament President Martin Schulz told HuffPost Spain last week, in an apparent reference to Tsipras and his government.

The pointed rhetoric has gone both ways, with Tsipras on Saturday rallying against "authoritarianism and harsh austerity" while calling for a July 5 referendum to decide whether Greece should accept another bailout. 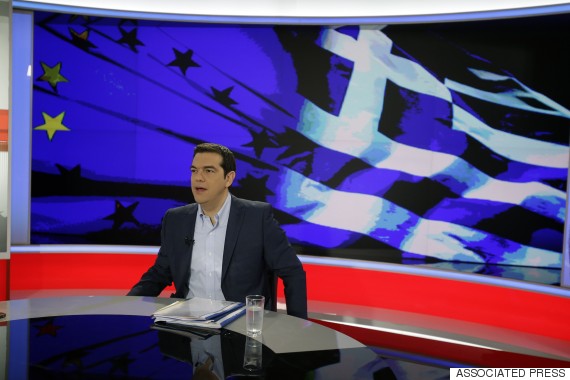 Although they don't endear him to creditors, Tsipras' far-left ideological principles are what helped him get elected. Before rising to national prominence, Tsipras was a vocal critic of austerity, coming from the political fringe in 2012 to be a serious contender. Amid anti-austerity sentiment that year following the second of Greece's bailouts, Syriza shot to 25 percent in the polls and became the country's second biggest party.

Before helming Syriza, Tsipras was involved with various left-wing political groups in Greece, including the Youth Coalition of Greece and Communist Youth of Greece. He also ran for mayor of Athens in 2006, but failed to win the vote.

Nevertheless, Tsipras' combination of fiery rhetoric and casual demeanor caught on with many Greeks in the era of austerity. He attracted new blood to the Syriza party and broadened its appeal to people frustrated with the strict policies imposed on Greece. The support was strong enough to carry him into office.

Tsipras will turn 41 in July, but he may have little to celebrate. The debt crisis and bailout negotiations have proven a huge task for Syriza, and some analysts predict that if the crisis deepens, it could ultimately force the party and its leader out of power.