By Paul Taylor and Renee Maltezou

But German Chancellor Angela Merkel said on arrival there was still no basis for reopening negotiations with Athens.

"It is not a matter of weeks but of a few days" to save Greece from collapse, Merkel told reporters.

With Greek banks down to their last few days of cash and the European Central Bank tightening the noose on their funding, Tsipras tried to convince the bloc's other 18 leaders, many of whom are exasperated with five years of crisis, to authorize a new loan swiftly.

Merkel and French President Francois Hollande said after conferring on Monday in Paris that the door was still open to a deal to save Greece from plunging into economic turmoil and ditching the euro.

Merkel, under pressure in Germany to cut Greece loose, made clear it was up to Tsipras to present convincing proposals after Athens spurned tax rises, spending cuts and pension and labor reforms that were on the table before its 240 billion euro ($262.7 billion) bailout expired last week.

Euro zone finance ministers complained that their new Greek colleague Euclid Tsakalotos, while more courteous than his abrasive predecessor Yanis Varoufakis, had brought no new proposals to a preparatory meeting before the summit.

Greek officials said the leftist government broadly repeated a reform plan Tsipras sent to the euro zone last week before Greek voters, in a referendum on Sunday, overwhelmingly rejected the austerity terms previously on offer for a bailout.

Finnish Finance Minister Alexander Stubb said Greece would submit a formal request for a loan from the European Stability Mechanism bailout fund within a few hours.

Jeroen Dijsselbloem, chairman of the "Eurogroup" of common currency finance ministers, said the finance ministers would hold another conference call on Wednesday to review the Greek request for a medium-term assistance program.

Reflecting the irritation of several ministers, he said the Eurogroup was still awaiting a Greek letter with one clear set of proposals.

Tsipras was to meet jointly with the leaders of Germany and France, the currency area's main powers, and European Commission president Jean-Claude Juncker before the summit begins at 6 p.m. (1600 GMT). 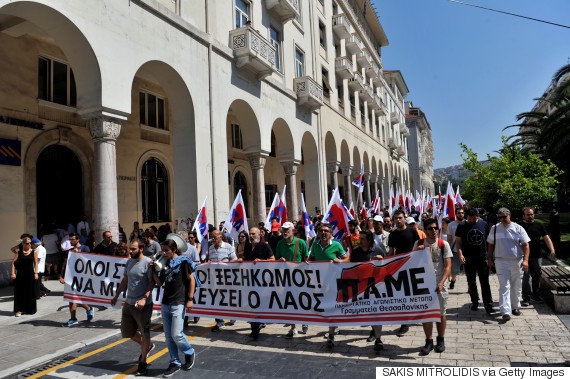 Earlier Juncker, who has tried to broker a last-minute deal, told the European Parliament: "There are some in the European Union who openly or secretly are working to exclude Greece from the euro zone."

He did not name names but may have been referring to German Finance Minister Wolfgang Schaeuble, who has made no secret of his skepticism about Greece's fitness to stay in the euro and last week suggested a possible "temporary" exit.

From the Greek side, the key to making any deal politically acceptable will be to secure a stronger commitment from Merkel and other lenders to reschedule Greece's giant debt burden, which the International Monetary Fund says is unsustainable.

Without some firmer pledge of debt relief, neither Greece nor the IMF is likely to accept a deal. But that may be more than Germany and its northern allies can swallow.

Schaeuble said on arrival that anyone who had read the EU treaty knew debt write-offs were forbidden in the euro zone. He did not rule out other forms of restructuring.

At stake is more than just the future of Greece, a nation of 11 million that makes up just 2 percent of the euro zone's economic output and population. If Greek banks run out of money and the country has to print its own currency, it could mean a state leaving the euro for the first time since it was launched in 1999. The precedent could raise risk for other countries.

Yet even in France, one of the euro zone countries most sympathetic to Athens, an opinion poll published on Tuesday showed one in two people want Greece to leave the euro zone. 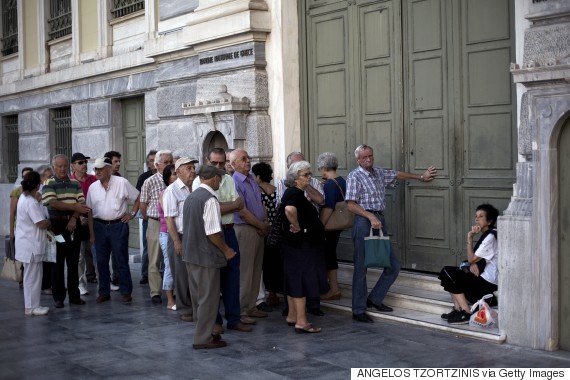 Strengthened by the overwhelming 61.3 percent 'No' vote in Sunday's referendum, the leftist Tsipras won the unprecedented support of all other Greek party leaders on Monday.

But he gave little clue of what reform concessions he would make to try to convince deeply skeptical European leaders to lend Athens more money after five months of acrimonious and fruitless negotiations with his leftist administration.

Even with the country on the brink of economic collapse, Greek officials said the government was still seeking exceptions from its reform pledges to protect special interests.

Athens wants to keep a 30 percent discount on value added tax on Greek islands and delay defense spending cuts. It is also resisting raising VAT on restaurants to 23 percent, and wants to wait until 2019 to phase out an income supplement for poorer pensioners, officials said.

Juncker told EU lawmakers he was working night and day to get negotiations reopened and chided the Greeks for their aggressive attitude, saying it was unacceptable to accuse the EU of behaving like "terrorists," as Varoufakis did last week.

European Central Bank policymaker Ewald Nowotny suggested the bank might be able to provide some sort of bridge funding while Greece negotiated a longer-term conditional loan to see it over a crucial July 20 bond redemption to the ECB.

But one of his hardline ECB colleagues, Ilmars Rimsevics of Latvia, said Greece had effectively voted itself out of the euro and issuing a second currency was the most likely next step.

An ECB policy paper said the central bank could not be overly generous with emergency funding nor provide liquidity on insufficient collateral.

A bank closure in force since the talks collapsed was prolonged until Thursday at least, and cash withdrawals remain limited to 60 euros a day, with 20 euro notes running out.