As negotiations between Greece and its creditors continue to fail to produce a bailout deal, the Greek central bank warned on Wednesday that the nation could start down the path to leaving both the euro and the European Union if it defaults on its debts.

Greece owes the International Monetary Fund 1.6 billion euros by the end of June. The IMF says it will allow no grace period, although it has occasionally done so for debtors in the past. Most likely, if Greece cannot secure an agreement with the so-called "troika" of creditors -- the IMF, the European Central Bank and the European Commission -- it will be unable to make the payments, 7.2 billion euros in bailout aid won't be released and the country will go into default immediately.

While both sides wish to avoid such an outcome, the talks seem to be at loggerheads. Greece's left-wing Syriza government stands opposed to harsh spending cuts while the troika demands the government make more internal reforms.

The specter of a Greek exit from the euro, sometimes called the "Grexit," has loomed over this year's bailout talks, just as it did in previous years of debt negotiations. However, as the deadline approaches, observers have started analyzing what will actually happen if the country does default on its debt. 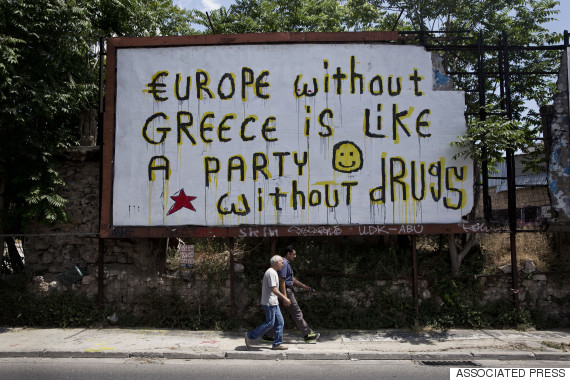 Two men walk under graffiti on a billboard in Athens. (AP Photo/Petros Giannakouris)

There are multiple scenarios that could occur in the event that no deal is reached. Many economists and financial writers predict that the effects on Europe would be bad, but not nearly as harmful as what would happen within Greece itself.

WHAT COULD HAPPEN TO GREECE?

1. Default without exiting the euro.

Despite the Greek central bank's warning that a default could force the country to give up the euro and leave the eurozone (the group of nations that use the currency), that wouldn't automatically be the case.

If Greece defaults, the ECB will need to decide whether to continue authorizing emergency lending to Greek banks or to pull the plug altogether, Reuters notes. Should the ECB continue lending, Greek banks could stay afloat for a little while.

This default-without-exit plan, The Wall Street Journal explains, could give Greece more time to reach a bailout deal, or might simply mitigate the consequences of an immediate default.

2. Greece leaves the euro and adopts its former currency.

An obstacle to the emergency lending is that Greece has more big payments approaching in July, which it doesn't have the money to pay. If the ECB decides to cut off lending and the country runs out of money, Greece would likely be forced to abandon the euro and print its own currency.

In this event, the country might return to the drachma, its old currency.

Experts fear that this move could cause a bank run, in which citizens take euros out of their accounts en masse before the euros can be converted to drachmas. This hasty withdrawal would damage Greek financial markets and cause capital to flee the country, Reuters notes. Actually, a slow-motion version of this has already been taking place, with Greek bank deposits hitting a 10-year low earlier this year.

To make these bank runs less likely in the event of a return to the drachma, Greece could institute capital controls in an attempt to limit the amount of money that could be transferred out of the country. It's not known exactly how this would work in Greece, but a recent Bloomberg article explained that Cyprus instituted comparable policies during its financial crisis. These included daily caps on ATM withdrawals and limits on the amount of money Cypriots could take while traveling and on how much they could send abroad.

Some economists, like Paul Krugman, see a long-term upside to defaulting and switching to the drachma. They argue that Greece could devalue its currency and begin an export-based recovery, as well as restore funding to social programs. On the other hand, these economists ackowledge, European creditors would lose out on payments they would get if Greece remained in the eurozone. 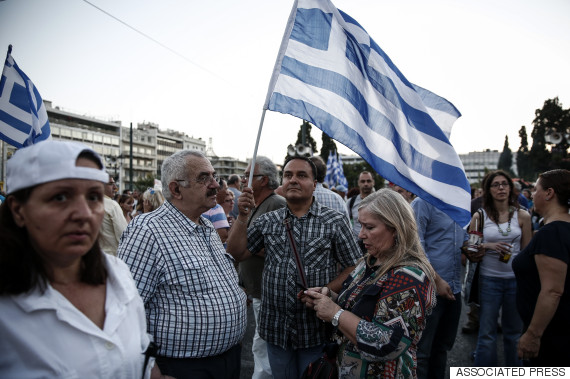 Protesters holding national flags take part in an anti-austerity rally in front of the parliament in Athens on Wednesday. (AP Photo/Yorgos Karahalis)

3. Greece leaves the euro and starts a parallel currency.

Another potential scenario is that instead of reverting to the drachma, Greece could start a parallel currency to the euro that it could print and use to pay government workers' salaries. This would free up euros with which Greece could pay its international creditors, with the new currency acting as a kind of IOU from the government to its citizens.

The problem is that the government needs to be able to convince Greeks that it will actually honor these IOUs. The parallel currency could also be perceived as a kind of "Disneyland" money that's good within Greece but not accepted under the same terms as the euro. Or the notes could be printed in excess, which would devalue the currency, Bloomberg notes.

4. Greece leaves not only the eurozone, but the European Union as well.

There is also the question of whether Greece could ultimately exit the European Union if it defaults, as the Greek central bank suggested. Martin Schulz, president of the EU parliament, told The Guardian on Wednesday that dropping out of the eurozone would also mean leaving the EU.

But it's not clear how that would transpire without a legal mechanism to give Greece the boot: Under current EU treaties, there's no process for kicking a country out of the union. Although states can leave voluntarily, the majority of Greeks want to stay. 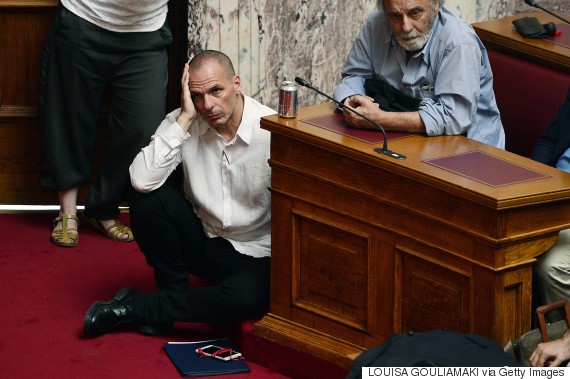 WHAT COULD HAPPEN TO EUROPE?

The European Union worried in previous "Grexit" scares that if Greece left the euro, French and German banks that had lent funds to Greece would be threatened. There was also concern about default spreading via a domino effect of sorts: Markets in weak eurozone economies would be spooked by the ECB letting Greece default, resulting in bank runs in nations like Portugal, Ireland and Italy. Fearing a currency devaluation, companies might be compelled to withdraw huge amounts of capital from these countries, thereby causing further economic crisis.

In this round of negotiations, however, there is less worry about this possibility. The EU has set up the European Stability Mechanism rescue vehicle, which seeks to provide a bulwark for weak economies that could be affected by a Grexit, according to The New York Times. Also, Greece mostly paid off the French and German banks with its first bailouts, The Washington Post notes. Greece now owes the majority of its debt to European governments, meaning that a default, while harmful, wouldn't destroy these countries' broader economies.

European banks are also doing better than they were during the last round of negotiations, with regulatory measures and increased capital designed to withstand stress, the Times notes.

2. The end of a political project

A more serious way in which the default could hurt Europe has to do with the desire to preserve the eurozone as a political project. European leaders have tried for five years to keep Greece part of the eurozone, and as Germany's Der Spiegel explains, it would be seen as a disaster if all that time and effort were for nothing.

Greece would be the first country to leave the euro, and its departure would be a huge blow to the idea of the eurozone as a project for prosperity in a united Europe. The BBC notes that a Grexit could benefit anti-EU political groups and shake the sense that the euro was permanent.

Greece leaving the euro could also set a precedent for other nations to leave in the future.

Portugal is a candidate for a similar outcome, as it also faces its own debt crisis. The country's prime minister, Pedro Passos Coelho, has denied that Portugal would be next if Greece is to go.

Wealthier nations like Germany also fear that if Greece succeeds in receiving a bailout without making the spending cuts that creditors demand, a precedent would be set in which countries could threaten to leave the eurozone in exchange for receiving loans.

What Happens If Greece Defaults On Its Debts?
Athens' Badass Street Art