By Lefteris Karagiannopoulos and Matt Robinson

ATHENS, July 4 (Reuters) - Greece's finance minister accused creditors of trying to "terrorize" Greeks into accepting austerity, warning Europe stood to lose as much as Athens if the country is forced out of the euro after a referendum on Sunday on bailout terms.

After a week in which Greece defaulted, shuttered its banks and began rationing cash, Greeks vote on Sunday on whether to accept or reject tough conditions sought by international creditors to extend a lending lifeline that has kept the debt-stricken country afloat.

The left-wing government is urging a 'No' vote, saying Greece's European partners are bluffing when they warn that would mean a Greek departure from Europe's single currency, with unforeseeable consequences for Greece, Europe and the global economy. 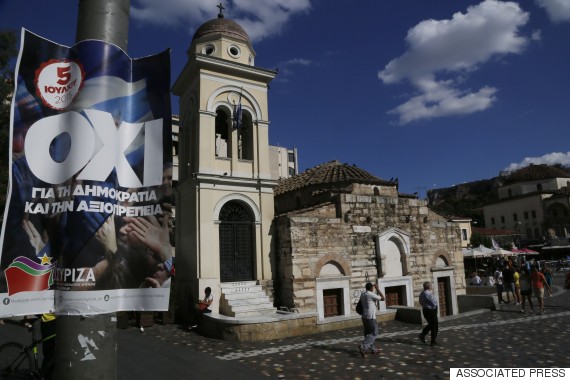 A banner reading ''NO for democracy and for dignity'' outside a Greek Orthodox church at Monastiraki square in Athens, July 4, 2015. (AP Photo/Petros Karadjias)

Opinion polls on Friday gave the 'Yes' camp, which favors accepting the bailout terms, a slender lead but all were within the margin of error and pollsters said the vote was too close to call.

Only one had the 'No' vote winning, despite a turnout of at least 50,000 opponents of the deal at a rally in central Athens on Friday that appeared significantly bigger than a simultaneous rally by the 'Yes' camp.

"What they're asking us to accept is eternal slavery," said Ermioni Tenekidou, 54, a teacher.

Finance Minister Wolfgang Schaeuble of Germany, Greece's biggest creditor and toughest critic, said any so-called Grexit, Greek exit from the euro zone, might only be temporary.

"Greece is a member of the euro zone. There's no doubt about that. Whether with the euro or temporarily without it: only the Greeks can answer this question. And it is clear that we will not leave the people in the lurch," he said.

But it is far from clear how a temporary exit from the 19-nation euro currency bloc might work. Some economists have raised the idea of a temporary suspension, whereby Greece would revert to a national currency for a number of years until its economy stabilized. 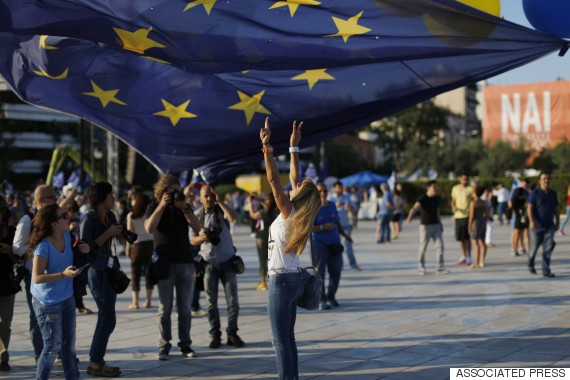 A woman makes the V-sign under a European Union flag during a rally organized by supporters of the Yes vote in Athens, July 3, 2015. (AP Photo/Emilio Morenatti)

Greece's European partners say the euro zone is better placed to minimize the impact on its vulnerable southern flank from a Greek exit than several years ago when the debt crisis exploded. But Greek Finance Minister Yanis Varoufakis said Europe stood to lose more than Greece.

"If Greece crashes, a trillion euros (the equivalent of Spain's GDP) will be lost. It's too much money and I don't believe Europe could allow it," he told Spanish newspaper El Mundo.

Varoufakis reiterated he would resign if Greeks vote 'Yes', and accused creditors of trying to terrorize voters by capping a liquidity line to Greek banks.

"What they're doing with Greece has a name: terrorism," he told El Mundo. "Why have they forced us to close the banks? To frighten people."

In an article in the Greek daily Kathimerini, Varoufakis wrote: "The EU will have no legal grounds to throw Greece out of the euro, and then the real negotiation will start with creditors."

Greece accounts for barely 2 percent of the euro zone's economic output, but its exit would represent a massive blow to the prestige of the grand project to bind Europe's nations into an unbreakable union.

"Even if we can cope with such a development in terms of financial policy, a Grexit would be a disastrous signal to countries outside the European Union," German Foreign Minister Frank-Walter Steinmeier told Tagesspiegel am Sonntag newspaper.

"Europe's reputation and credibility would be damaged in parts of the world." 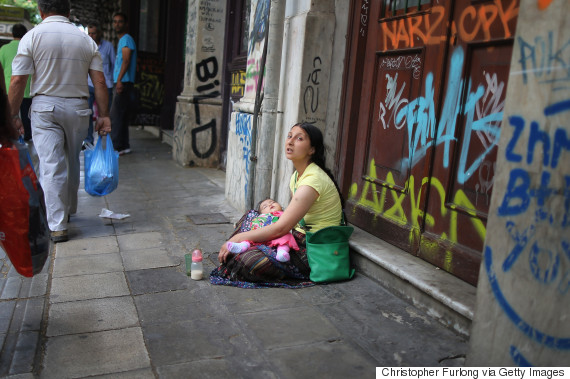 A woman begs the street on the eve of Greece's austerity vote on July 4, 2015 in Athens, Greece. (Christopher Furlong/Getty Images)

It would also spell even greater hardship for Greece, stricken by economic crisis that has left one in four workers without a job, hammered pensions and pay and fueled political instability.

The Greek bakery chain Venetis said it had decided to provide free bread to pensioners, the jobless and homeless for as long as banks remain closed. "It's our turn to support those in need," Managing Director Panagiotis Monemvasiotis told Reuters.

Germany's Welt am Sonntag newspaper, citing a "senior negotiator" among Greece's creditors, said the Athens government had money "for perhaps a week, but certainly not much longer."

They point out that the offer Greeks will vote on is no longer on the table and the question is worded in cryptic legalese, leading the Council of Europe, a major European rights watchdog, to say the plebiscite falls short of international standards of fairness.

Echoing a defiant Tsipras at Friday's 'No' rally, 60-year-old teacher Giorgos Sarafianos said the referendum was a question of "dignity."

"The only message that can be sent tomorrow is that if we want to be part of the European community, it should not be with our heads bowed," he said. 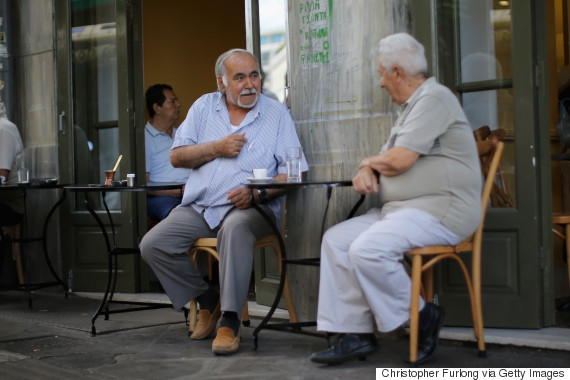 Greek men drink coffee in a street cafe on the eve of Greece's austerity vote on July 4, 2015 in Athens. (Christopher Furlong/Getty Images)