Germany in 2015 is a nation full of self-righteousness. The Greek crisis has produced in the country an unpleasant strain of chauvinism towards other nations, rooted in our belief in our own exemplarity: We work harder. We're more successful. We're more frugal. You could almost believe that inside every German hides a little Edmund Stoiber, who annoyed the rest of the country for 14 years with his Bavarian valedictorian routine. In keeping with this, television journalist and Stoiber progeny Sigmund Gottlieb asked Sunday night on his show, "What are agreements worth, if they're constantly being broken?" He was speaking about the Greeks, with their supposedly lax morals. But since the creation of the euro, Germany has also broken the Maastricht deficit limits. Germany's national debt currently runs above 70 percent of the GDP. The limit is 60 percent. The difference amounts to more than a hundred billion euros. And Germany, along with France, was one of the first countries that as early as the start of the 2000s, took on new debt above the allowed limit of 3 percent of GDP. Maybe a change of perspective would help Germans understand how many Greeks are currently feeling. What would happen if the Eurozone leaders realized that the root of the problem is German debt policy and the constant rule-breaking on the part of the Federal Republic -- seeing as the biggest European economy needs to have an exemplary character; seeing as nobody can be made to follow the rules if Germany keeps breaking them? And what would the negotiations look like if the heads of all the other European governments worked together to discipline the Federal Republic? HuffPost Germany presents a fictional scenario built around the current demands placed on the Greek government and people. Retirement Germany's parliament has to immediately decide on a rollback of the costly pension agreement that the federal government put into place in 2014 despite the country's precarious financial situation. Critics had previously warned that retirement at 63 would cost more than 230 billion euros by 2030 -- money that is sorely needed both for the elimination of debt and for investment in the future of the German economy. Until 2018 the pensions will be funded by a surplus in the pension fund; after that, presumably, taxes will be used to pay for them. The Social Democratic Party was the driving force behind the basic argument for retirement at 63: anyone who's worked for 45 years should be rewarded for it with an earlier retirement, the SDP said. In Greece, the popular media railed against the "lazy Germans," napping comfortably in their social safety net at the expense of Europe's common currency. Greek Prime Minister Alexis Tsipras expressed special scorn for the CDU's (Christian Democratic Union of Germany) "mothers' pension" project, giving extra money only to women whose children were born before 1992. He decried the pension as "special-interest politics for baby boomers" driven by strictly tactical electoral motives. Nobody can afford these kinds of "electoral gifts at Europe's expense," he said. 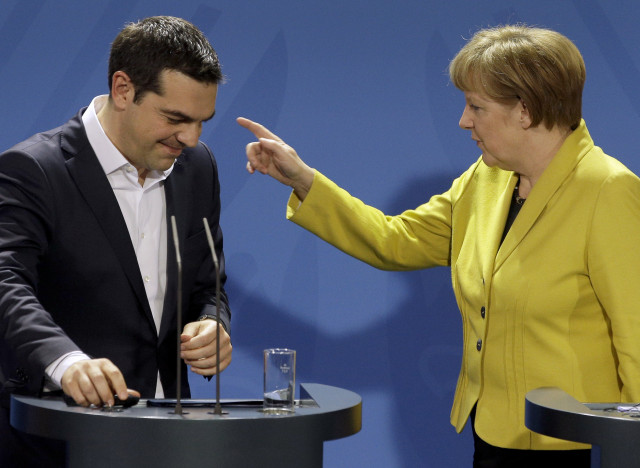 Germany's pensioners, therefore, must accept austerity cuts. Widows and single mothers would be hit especially hard. Tsipras appealed to the Germans' frugal nature. "This is a good start, but we need a number of additional painful reforms to reach the goal," he said. Pensions One of the things the European Union has in its sights are pensions for bureaucrats. A consensus reigns in Europe that "those who led Germany down the path of failure" must now pay for it. Currently, a bureaucrat in Germany who has served the state for more than 40 years can count on a pension of over 70 percent of their last pay grade. In addition, there are generous early retirement and work disability compensations. In the future, according to the Eurozone leaders' demands, bureaucrats' pensions should be brought down to the legally mandated levels. Anyone entering government service today at age 25, in other words, would in 2057 receive around 45 percent of their final salary as a pension. This represents a cutback of over one-third. The German government employees' union protests that you can't compare employment pensions with social security payments. After all, many non-governmental employees would also benefit from generous employment pensions. Tsipras, presented with this argument at a press conference, laughs heartily: "You know, I'm 40 years old. What employee my age in Germany still has any expectation of an employment pension?" The politician remains impassive and insists that Germany must make "healthy cuts." He accuses German bureaucrats of "denying reality." The trimming of pensions must be decided by July 22, or the EU will have to resume discussion of a potential Gerxit -- throwing Germany out of the eurozone. Bureaucracy Once upon a time, the European Union made reform of the Greek legal system a precondition for new negotiations. Now the issue is the German bureaucracy, which appears to be just as big of a mess. The Dutch prime minister, Mark Rutte, has made it clear that he expects a fundamental reform of the German bureaucracy, which, with its "incomprehensible regulations," negatively impacts Germany's competitiveness. As an example, he offers the Transatlantic Trade and Investment Partnership (TTIP). Naturally, the treaty will bring important changes to the German economy. And naturally, the country needs to get used to the idea that in the future retail products will be sold to American standards. That's just the cost of economic competitiveness. Fast-tracking the ratification of the TTIP, therefore, is also a basic condition for further negotiations. "We can't afford to keep discussing German reservations" is the word from Brussels. The Irish government says, "Discussion on this matter isn't acceptable. Democracy or not, what's at stake is Europe." Retail Hours Among the EU's demands is a reform of the law regulating retail outlets' opening hours. Whereas until now there have been relatively few shopping Sundays, stores should now remain open all weekend, every weekend. Resistance to this is especially strong in Bavaria. Bavarian Prime Minister Horst Seehofer (of the Christian Social Union) says that resting on Sunday is part of the country's "Christian Western heritage" and that increased hours would weigh heavily on employees and their families. "What do we care if a provincial leader from Bavaria goes to the barricades?" replies Eurogroup leader Jeroen Dijsselbloem. "As a federal minister in the '90s, he could have taken steps to keep the German debt debacle from ever getting so bad." Water Utilities In some German communities, there is discussion about buying back the water utilities that had previously been privatized. The Eurogroup is not in favor. 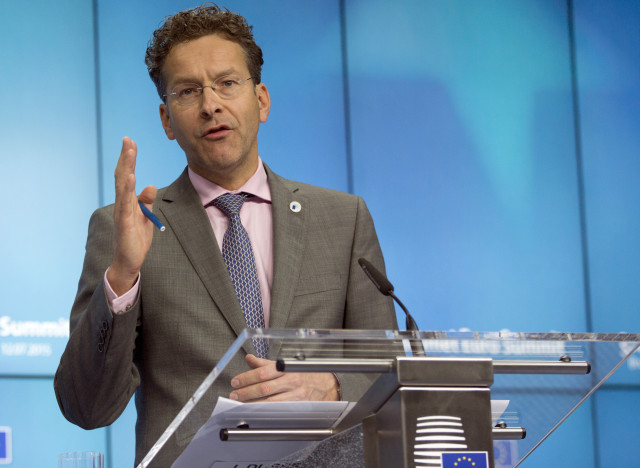 Dutch Finance Minister and chair of the Eurogroup finance ministers, Jeroen Dijsselbloem. "The money is urgently needed to reduce local deficits. I remind the parliament, the state legislatures and the communities that an immediate halt to those plans is one of our conditions," says Jeroen Dijsselbloem. The ongoing plan to buy back electrical utilities is also affected. Eco-activists are demonstrating in protest, to no effect. The Demand For Privatization In order to ensure that Germany won't violate treaty limits in the future, a so-called "privatization fund" should be created. The demand comes from Tsipras, who in an interview stated that he's "had enough" of the Germans' "constant domestic muddling." Into this fund should go national services and properties which can be sold in case of emergency, should Germany not take meaningful steps to resolve its debt. The total size of the fund should be some two-thirds of the federal budget. Included in the fund would be the German national train service, parts of the telecommunication utilities and the postal service. Whether the train service, rail network included, is to be sold to an eager Chinese investor is a decision no longer in the hands of the federal government but in the hands of its partners in the European Union. Critics point to the example of the British rail network, which, following its complete privatization, barely fulfills the minimum needs that citizens have of a public transport system. "The Germans should have thought about that earlier," comes a snide French response. In Germany, meanwhile, anti-European criticism is growing. The Restart party, led by former AFD (Alternative for Germany) chairman Bernd Lucke, is polling at 25 percent. From the Baltic states comes criticism of Germany's political culture: "If Lucke and his dubious organization emerge as the second-strongest party in the next German parliamentary elections, nobody should be surprised if no upstanding European is willing to sit at the table with the German government anymore." A regional politician from Italy sums up the Eurozone's feelings: "The nerve of those Germans."

NOTE: This is a fictional scenario. All quotations are fabrications.