ATHENS -- The recent election win by Greece's far-left Syriza party has focused attention on the economic consequences of its policies for the Eurozone.

What has been overlooked is the effect this victory may have on the foreign policy of the EU countries as well as on NATO.

That this latter aspect would come to predominate developments was made abundantly clear as soon as the new government was formed. In one of its first acts, the new Syriza-led government broke ranks on foreign policy and protested the EU's condemnation of recent Russian-backed military offensives in Ukraine and the call for further sanctions on Russia. The government of Prime Minister Alexis Tsipras complained that it hadn't been consulted. According to a government statement, the EU announcement violated "proper procedure" by not first securing Greece's agreement.

Syriza's pro-Kremlin stance reflects a deep conviction within the party that Greece has much to gain from closer ties to Vladimir Putin's Russia.

Some sections of the party believe that Russia can be a bargaining chip to be used in negotiations with Western creditors over the debt issue. For others, Russophilia reflects a kind of nostalgia for the communist days of old.

For the majority, however, the attraction to Putin's Russia is a part of the anti-Western and anti-American narrative, which for many years has dominated the worldview not only of the left but also of large segments of the Greek society.

The mutation from admiration for the Soviet system to the admiration of Putin's Russia is exemplified in the intellectual development of Greece's new foreign minister, Nikos Kotzias. Mr. Kotzias is a former Communist, and in 1983, he wrote a book praising the Communist dictatorship in Poland and attacking the Solidarity movement and its leaders.

In recent years, Mr. Kotzias seems to have developed a very sympathetic view of Mr. Putin and his policies. In his writings, Mr. Kotzias sees Russian actions in Crimea and Ukraine as the normal reactions of a superpower that faces the "aggression" of the U.S. and its ally Germany. In his view, Germany is transforming weaker countries like Ukraine and Greece into "colonies of debt" so that it can dominate them.

In 2013, Mr. Kotzias introduced a lecture by Alexander Dugin, an extreme Russian nationalist, at the Piraeus University of Athens, where Mr. Kotzias held an appointment. Mr. Dugin is one of the warmest advocates of a Russian military invasion of Ukraine and has repeatedly called for the extermination of the "Kiev traitors."

During his speech, the Russian nationalist praised Mr. Putin for stopping the development of "a global, pro-Western, liberal, pro-American oligarchy." He also recommended that orthodox countries like Greece and the Slavic countries should form an inter-civilizational belt within the EU. 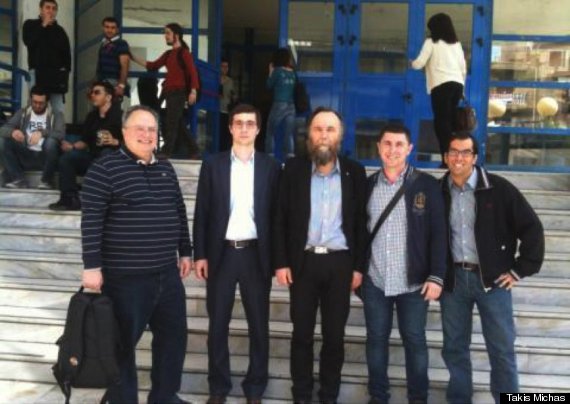 Nikos Kotzias (now foreign minster of Greece) on left with Alexander Dugin (bearded in center) in 2013 in Athens.

Nor is Mr. Kotzias the only Syriza official with pro-Putin and anti-NATO views. Kostas Isichos, the new deputy defense minister, last year described EU sanctions on Russia as "neo-colonial bulimia" and saluted the "impressive counterattacks" of Russian-backed militias in eastern Ukraine. He said the Kiev government was guilty of tolerating "neo-Nazi abominations."

Moreover, in a recent interview with the Danish newspaper Weekendavisen, he denounced NATO as "not a peace-loving institution," although he claimed that leaving NATO "is not among Greece's first priorities." Friendliness toward Putin's Russia and hostility toward Western institutions is deeply ingrained in Syriza's DNA. A look at how Syriza members in the European Parliament have voted on foreign policy resolutions related to Russia and the Eastern Partnership countries is very instructive.

Syriza members of the European Parliament voted against the Association Agreement with Ukraine in the autumn of 2014.

They also abstained in the vote on Association Agreements for Georgia and Moldova. Syriza deputies moreover opposed two recent resolutions drafted by the European Parliament that called for more sanctions on Moscow and condemned Russia's actions in Ukraine, including the annexation of Crimea and Moscow's support for separatists in the eastern part of the country. Syriza deputies even opposed an innocuous law on renewing EU-Ukraine cooperation on science and technology.

The leader of the Syriza party Alexis Tsipras has repeatedly condemned the current sanctions on Russia and during a visit to Moscow in May 2014 he met with Putin allies Valentina Matviyenko and Aleksey Pushkov who are both facing sanctions by the U.S. and the EU. He also came out in support of internationally unrecognized referendums in the separatist-held territory in Ukraine.

Nor is Syriza's support to Russia only restricted to matters pertaining to the latter's foreign policy. The party also indirectly endorses Mr Putin's populist authoritarianism: Thus the Syriza deputies in the European Parliament abstained in the vote supporting a resolution condemning the closing of the Russian human rights NGO Memorial.

Adoration for Putin is also at the heart of Syriza's right-wing coalition partner, the Independent Greeks, whose leader, Panos Kammenos, has just become the defense minister. Upon receiving his government post he promptly called for an end to the Western embargo so that Greece could resume its buying of Russian arms.

His position reflects a broader view on the Greek right, which sees Russia as a traditional ally because of their common Orthodox Christian heritage.

Syriza's new geopolitics have won it many friends in Moscow. Moscow reciprocated to the Greek government's statements opposing the embargo by praising Greece for its "democratic attitude," while Russian Foreign Minister Sergey Lavrov immediately invited his Greek counterpart to Moscow.

Syriza's new geopolitics will, however, win it few friends where it really matters: The EU and NATO. In these two organizations Greece will increasingly come to be perceived both as a mouthpiece for Mr. Putin and his geopolitical aims. Just like in the 90's when Greece was seen, with very good reason, as a mouthpiece for Slobodan Milosevic and his henchmen in Bosnia.

To read more on this topic, check out the links below:

Lecture of Alexander Dugin held in the University of Piraeus (Greece)

Will Greece's New Government Be a Western Mouthpiece for Putin?
Greece Prepares For Key Vote