ATHENS, June 5 (Reuters) - Greek Prime Minister Alexis Tsipras on Friday spurned "absurd" terms of proposed aid from lenders and delayed a debt payment to the International Monetary Fund, prolonging an impasse that threatens to push Greece into default and out of the euro zone.

In a defiant speech aimed at winning parliament's backing for his rejection of the austerity-for-aid package, Tsipras balanced indignation with confidence that a deal was "closer than ever before" to keep his country inside the currency bloc.

The contradictory message underscored the growing pressure on Tsipras to quickly sign a deal before cash-strapped Athens runs out of money, while also trying to placate hardliners in his leftist party who oppose the terms creditors are demanding.

One far-left deputy minister suggested snap elections as a way out, by obtaining public legitimacy for difficult decisions to secure aid. But Tsipras made no mention of elections in an address that focused on attacking the aid plan offered by euro zone and IMF creditors.

"The Greek government cannot consent to absurd proposals," Tsipras told parliament. "I want to believe that this proposal was a bad moment for Europe or at the very least a bad negotiating trick and will soon be withdrawn by the masterminds themselves," he said.

He was speaking after Athens delayed a 300 million euro payment due to the IMF on Friday, a highly unusual step that rattled financial markets and sent Greek stocks down 5 percent but that does not yet signal a formal default.

Opinion polls published on Friday show around three out of four Greeks want to remain in the euro zone, while more want their government to accept the offer from European and IMF creditors than want it to be rejected.

But the lenders' proposal crosses many of Tsipras's 'red lines,' including hiking taxes, privatizing strategic assets and cutting benefits for poor pensioners.

Tsipras instead called on lenders to accept Greece's proposal sent this week that would reverse labor and pension reforms, calling it the only "realistic" proposal on the table.

He also refused to sign a bailout agreement or deal that does not include the debt relief he has long demanded.

Greece must agree a deal before its bailout expires at the end of June or risk outright default, pushing the euro zone into uncharted waters and opening the way for Greece to exit the European single currency zone. But the radical Tsipras, elected on a pledge to end austerity, has remained defiant.

Tsipras said he was shocked that after five year of austerity the lenders would make demands like abolishing a small benefit for low-income pensioners and imposing a 10 percentage point jump in electricity taxes.

His government says overly harsh austerity policies imposed by lenders in bailout packages have deepened one of the worst depressions in modern times.

In what appeared to be a threat that Greece was prepared to move unilaterally if its demands were not met, Tsipras said the government would legislate the restoration of collective bargaining rights for Greek workers, a move lenders oppose. 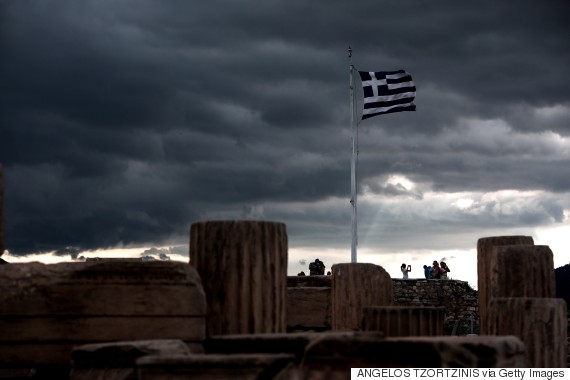 A Greek flag waves in the breeze at Acropolis hill, in Athens on June 5, 2015. (ANGELOS TZORTZINIS/AFP/Getty Images)

On Friday the government decided to bundle together some 1.6 billion euros it is scheduled to pay the IMF in June into a single payment at the end of the month, skipping a 300 million euro payment due on Friday.

It was the first time in five years of crisis that Greece has postponed a repayment on its 240 billion euro bailouts from euro zone governments, the European Central Bank and the IMF.

The IMF said the maneuver was unorthodox but permissible.

Deputy Social Security Minister Dimitris Stratoulis, from the far left of the ruling Syriza party, made clear the decision was a negotiating tactic.

"The government's move is a message that it wants to wait and see how far they (lenders) will take it, if they will back off from this unreasonable, inhumane, colonialist package they are proposing," he said.

Many analysts expect a last-minute aid deal that would avert a Greek exit from the euro but say the coming weeks could see further ructions in Greek politics, keeping markets on edge.

"Fasten your seat belts for what could be a rough ride in Greece," said Berenberg Bank chief economist Holger Schmieding.

Time is running out to clinch a deal and get further disbursements approved by EU national parliaments, some of which have appeared reluctant to offer Greece much budget slack, before the bailout program expires.

Europe's big powers and the United States have grown increasingly concerned about the unpredictable outcome as Greek cash reserves dwindle down toward zero.

"The Greek government and their international partners need to work to finalize a credible foreign program," a senior U.S. administration official said, saying Washington was monitoring the talks closely. "We're obviously encouraging all sides to continue to focus on finding a solution that's going to allow Greece to chart a path to recovery." ($1 = 0.8880 euros)

A trader works on the floor of the New York Stock Exchange on June 4, 2015 in New York City. (Photo by Andrew Burton/Getty Images)