Anger over proposed austerity measures reached a boiling point on Sunday as protests in the center of Greece's capital turned violent.

As tens of thousands gathered in front of the Greek parliament in Athens to protest, angry gangs looted stores and torched buildings, according to the New York Times.

Security forces formed lines and hurled tear gas to stave off protesters while rioters reportedly fought back with firebombs and broken bits of marble.

Sunday's clashes erupted after more than 100,000 protesters marched to the parliament to rally against the drastic cuts, which will ax one in five civil service jobs and slash the minimum wage by more than a fifth.

At least 10 buildings were on fire, including a movie theater, bank and cafeteria, and looters smashed dozens of shops in the worst riot damage in years. Dozens of police officers and at least 37 protesters were injured, 23 suspected rioters were arrested and a further 25 detained.

According to the BBC, some protesters were boxed in by police and unable to escape the tear gas flooding Syntagma Square. Reuters reported the use of stun grenades by police to fend off protesters.

Amid the violence, the Greek parliament approved a new round of punishing austerity measures on Monday.

The photos below show petrol bomb explosions, buildings engulfed in flames, and riot police using tear gas during the worst violence that Athens has seen in months: 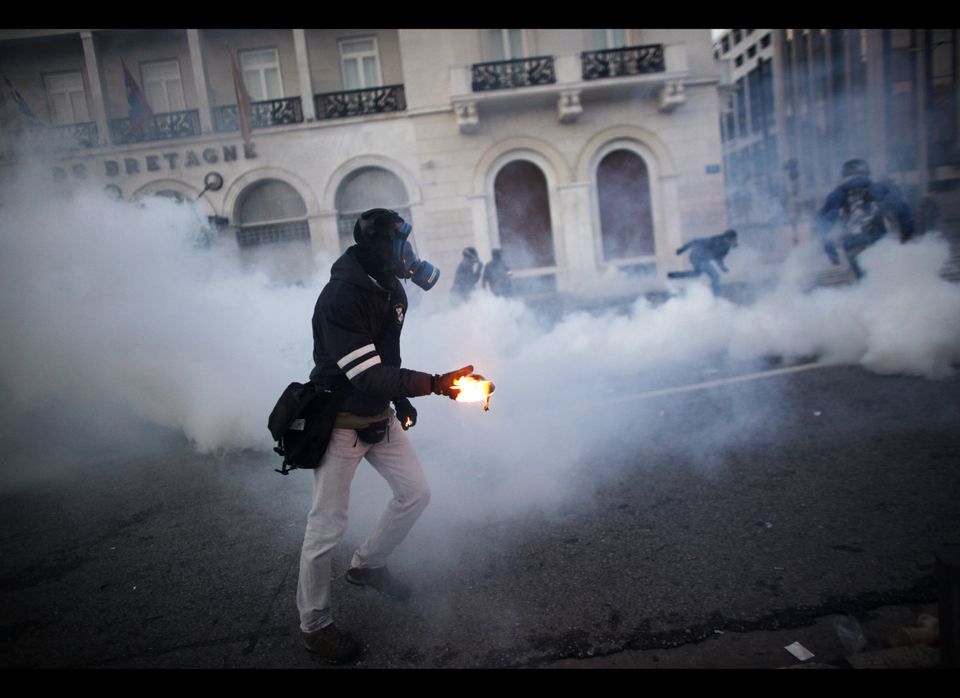 1 / 19
Riots in Greece
A demonstrator throws a Molotov cocktail as protesters clash with riot police in front of the parliament in Athens on Feb. 12, 2012. Greek police fired tear gas at petrol bomb-throwing protesters outside parliament, where tens of thousands had massed in a rally against austerity plans being debated by lawmakers. Police said some 80,000 protesters had gathered outside the building where debate on the plan imposed by the country's international creditors -- the EU, the IMF and the European Central Bank -- was ongoing before a late-night vote. (Angelos Tzortzinis, AFP / Getty Images)