To understand the historic magnitude of the victory of Syriza, the far-left party that won Greece's election on Sunday, take a look at their slogan: “For the first time, the Left in government.” This slogan is emblematic of the tremendous difficulties Syriza overcame in order to achieve its current political prominence, rooted in the turbulent history of the Greek left.

The history of the left in Greece can be understood as a cycle of creation and destruction. It is common practice among older generations to talk about the “curse of the left,” because even though it has shown that it can be victorious when united, it has often been plagued with infighting.

In the years to follow, "change" was the Communist Party's main slogan. That same slogan later played a role in the campaigns of the large political force that would come to the fore in subsequent elections, the Panhellenic Socialist Movement (PASOK). In 1981, PASOK became the first left-of-center party to win a majority in the Hellenic Parliament. ORIGINS, DIVISIONS AND THE FINAL SPLIT The Coalition of the Left and Progress was founded in 1989. It was an alliance between the Communist Party and the Greek Left, which had spawned from the Communist Party of the Interior and other smaller parties from the same ideological territory. Divisions emerged within the ranks of the Coalition over political dilemmas such as participating in a government with Greece’s center-right New Democracy party. The divisions were further fueled by the dissolution of the USSR, which left the Communist elements of the Coalition weakened and internally divided. Attempts to unite the Coalition into a cohesive party failed. The Communist Party eventually left the Coalition and today is one of the most vocal critics of Syriza. THE COALITION, THE MAIN PARTICIPANT IN SYRIZA Even though the Coalition struggled to navigate the fall of the USSR and decades of ideological infighting, it survived and became the main participant in Syriza, which was created in 2004 as an alliance between leftist political forces. Today, the leader of the united party is Alexis Tsipras, and the symbol of the party is the five-pointed star, a symbol of unity, along with three flags: a red one for the classic left, a Greek one for the ecological movement and a purple one that represents other social movements that Syriza embraces, such as feminism, migrant rights and gay rights. The founding declaration of Syriza contains references to Greece's agreement with its creditors -- the “troika” of the IMF, European Commission and the European Central Bank -- as well as harsh austerity measures and the humanitarian crisis resulting from a catastrophic unemployment rate. The party's objective is described as: “Always struggling for unity among the Left, the now united Syriza asserts a government of the Left with a new, broad and strong social majority that will allow for the people's interests to be served. The chants that the people shouted on the streets and in the squares, ‘Man over profits’ and ‘Another world is possible,’ are turned into a political and strategic goal through Syriza.”

This piece originally appeared in HuffPost Greece and was translated into English.

The History Of Syriza: How A Small Party Came To Power
Greek Elections 2015 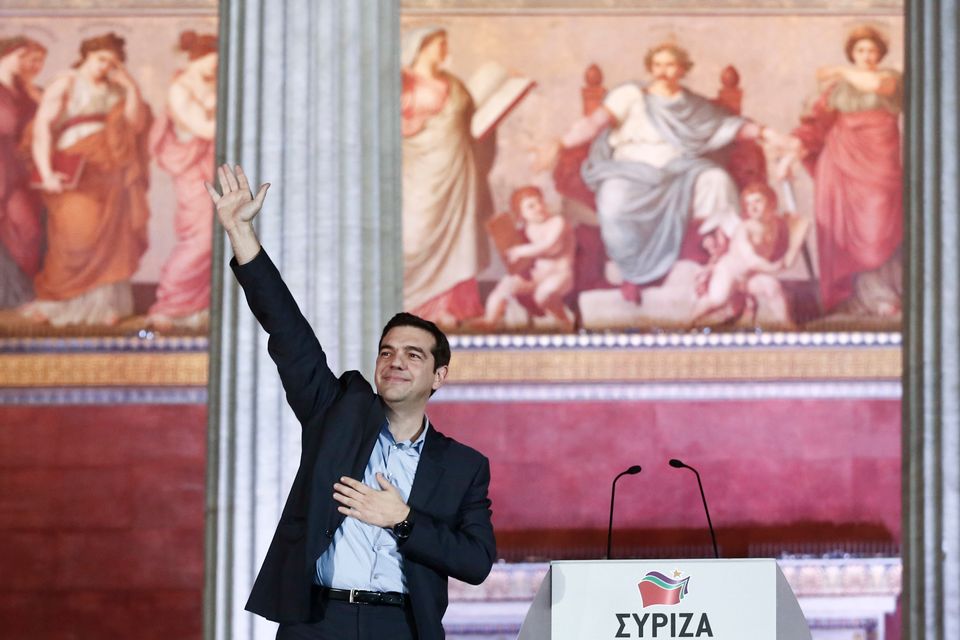