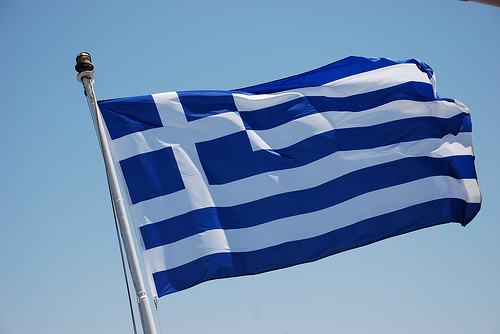 In its policies toward Greece, the "Troika" -- a new shorthand for the combined will of the European Commission, European Central Bank, and International Monetary Fund -- has actively and enthusiastically embraced Maggie Thatcher's social and political philosophy, memorably captured in her chilling assertion, "There is no such thing as society."

That philosophy has found its fullest and most concrete exposition in a 2014 "competition assessment" of Greece made by the Organization for Economic Cooperation and Development (OECD).  The OECD analyzed 555 Greek regulatory restrictions and made 329 specific recommendations the Troika expects Greece to enact with dispatch. Again and again the report views as virtually criminal regulations that favor small business, local ownership, and a reliance on local and domestic suppliers.

The OECD, for example, points an accusing finger at a Greek regulation requiring milk labeled "fresh" to have a maximum shelf life of 5 days. The regulation makes Greek "fresh" milk, on average, more expensive than in other EU countries. Why? "The high retail price of milk in Greece is a direct consequence of the high prices paid to Greek producers, since the five-day regulation makes imports next to impossible." To the economists at the OECD and the Troika price is all. But the majority of Greeks, and I daresay many of the rest of us, might well support an agriculture policy that asks us to pay a few more cents for a bottle of milk to sustain and nurture an ecosystem of small, domestic dairy farmers.

The OECD demands Greece abolish any laws restricting the days or hours a business can operate (e.g., Sunday closing laws) -- despite the fact that several European countries have enacted such policies to protect workers and small businesses. Germany has some of the most restrictive rules on opening hours of all.

The OECD insists, "The current retail price regulation of books should be abolished..." Why? "(N)ew retail channels such as the Internet will be developed." The market demands that small publishers and bookstores make way for Amazon.

The OECD bids Greece abolish ownership provisions to "allow the development of retail pharmacy chains not owned or run by pharmacists." The country's pharmacy care should be opened to giant drugstore chains.

Each of these examples reveals a full-throated assault on Greek society by the Troika. Let's examine the OECD and the Troika's bid to overturn Greece's pharmacy laws more closely. These require, as noted, that pharmacies be owned and operated by a licensed pharmacist, prohibit a pharmacist from owning more than one store, require that over-the-counter drugs be sold only in pharmacies, and cap the price of these medicines. The OECD's demands galvanized a 24-hour strike by pharmacists in mid June.

The OECD report oddly leaves out the fact that about half of the countries in the European Union have pharmacy ownership laws. For more than a decade these laws have been challenged by the European Commission, which increasingly views its primary mission as reducing any sense of national identity and cohesion. The EC has disputed these popular laws in Austria, Bulgaria, Cyprus, France, Italy, Germany, Greece, Portugal and Spain.

In 2009 the European Court of Justice agreed with the European Commission that prohibiting corporations from operating pharmacies does restrict the freedom of establishment and the free movement of capital. But it ruled pharmacy ownership laws an acceptable exercise of national authority.

The Court observed, "It is undeniable that an operator having the status of pharmacist pursues, like other persons, the objective of making a profit. However, as a pharmacist by profession, he is presumed to operate the pharmacy not with a purely economic objective, but also from a professional viewpoint. His private interest connected with the making of a profit is thus tempered by his training, by his professional experience and by the responsibility which he owes, given that any breach of the rules of law or professional conduct undermines not only the value of his investment but also his own professional existence."

Most Americans may be unaware that we too have a law protecting independent pharmacies. The same year the European Court of Justice affirmed the right of nations to protect independent pharmacies, a Walmart- and Walgreens-backed bill was submitted to the North Dakota House of Representatives to overturn a unique state law that requires pharmacies to be owned and operated by a licensed pharmacist.

The bill was defeated 35 to 57.  In 2011, the giant chains tried again and suffered an even more lopsided defeat 26 to 68. In 2014 an entity financed exclusively by a $3 million contribution from Walmart (North Dakota's population is 740,000) hired an out-of-state signature-gathering firm to put a measure to overturn the law on the ballot. Voters rejected the measure 59-41 percent.

North Dakotans obtain their medications from 171 independent and locally owned pharmacies throughout the state. They clearly like the system, and a report from the Institute for Local Self-Reliance found they have every reason to. North Dakotans have pharmacy care that outperforms care in other states on every key measure, from cost to access. North Dakota prescription drug prices are more affordable than in two-thirds of all states. North Dakota's rural areas are 51 percent more likely to contain a pharmacy than similarly-populated areas of South Dakota, which is dominated by large pharmacy chains. North Dakota urban areas have more pharmacy competition

North Dakota is the only U.S. state with a pharmacy ownership law but Greece is not the only European state that has one. Nor is it alone in having Sunday closing or retail book pricing laws.

Greece continues to have the legal right to enact such regulations. But its almost-prostrate government may no longer have the capacity, nor the will, to defend rules that have shaped the culture its citizens have cherished for so long.