I was in Greece last week and experienced a country completely different than was being portrayed on TV, amazed at how political and economic considerations could color the news so darkly. The fear-mongering did not work and Greeks voted overwhelmingly last week to say No to Europe's impossible demands. 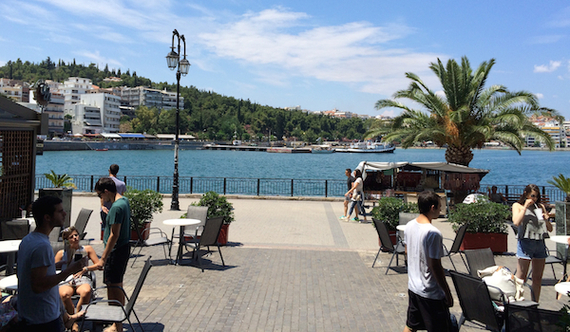 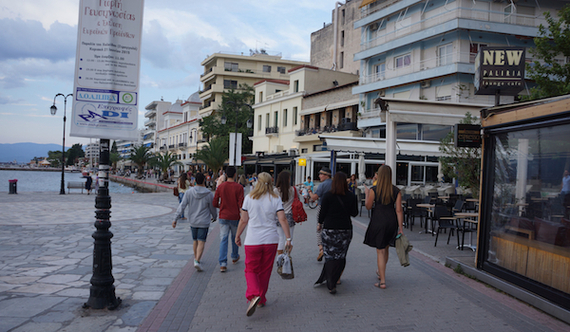 The island capital of Halkida on the Isle of Evia, two hours northeast of Athens, was
'business as usual' leading up to the Referendum. Photo: The Stewardship Report.

My findings: the Greek people, known for "philoxenia" or "hospitality," continue to be as warm and inviting as they have always been. Greece has among the largest percentage of repeat visitors in the world and, in the first quarter of 2015, North American visits were up 54%. I say: Now is the best time to travel to Greece. Greece today is safe, affordable - and more beautiful then ever.

Most of us have images of Greece in our minds that range from the Acropolis to the Islands - more than 3,000 of them. For the past two decades Santorini and Mykonos have consistently won the awards for 'best island' in both the Europe and Overall categories. But Greece is that much and more - our visit included Athens, the incredible Isle of Evia, and the majestic mountain region of Karpenisi. 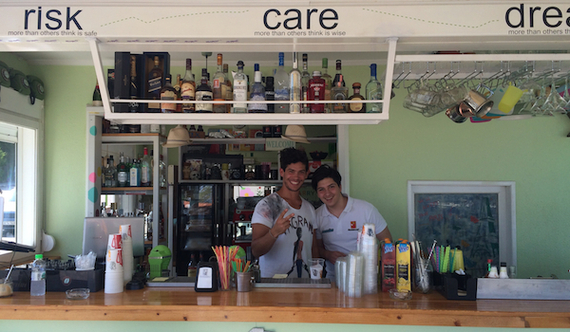 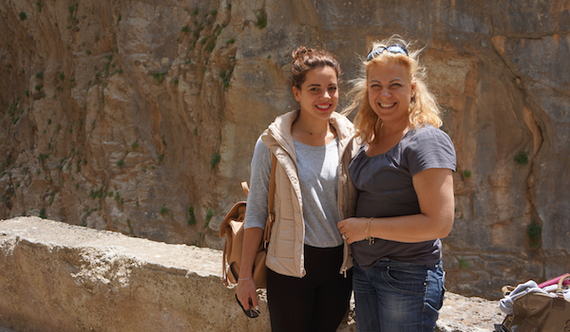 The people of Greece are incredibly kind and friendly. Here, at a kiosk at the ferry
dock in north Evia, and then, two Greek women. Photo: The Stewardship Report.

I arranged to visit Greece the week leading up to its historic Referendum. Although I have lived in Europe for several years and written about Greece and Greek-Americans (index), this was my first visit there. What I was not prepared for was both the warmth of its people and the sunlight - different than any I have experienced anywhere in my travels.

Over three hundred days of sunshine explains why so many activities are enjoyed outdoors. The temperate climate allows for the freedom of walking around and exploring at all hours of the day and night. A Mediterranean Vancouver. 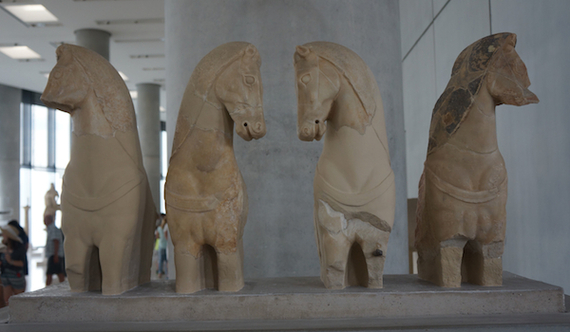 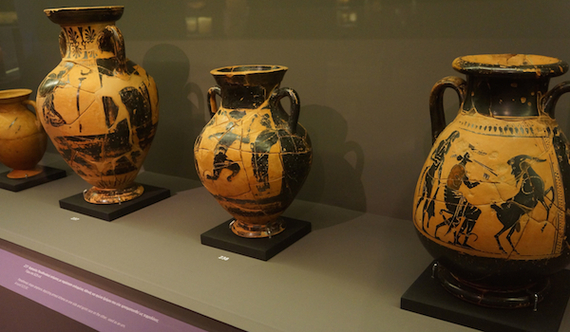 The modern Museum of the Acropolis is sensational. Photo: The Stewardship Report.

The Acropolis in Athens with its Parthenon is even grander than imagined. Literally meaning the 'highest spot in the city,' it soars above the capital and must have stunned early visitors thousands of years ago. This ancient citadel, located on a high rocky outcrop above the city, features a soaring modern museum at its base. The director of the museum gave us a personal tour. 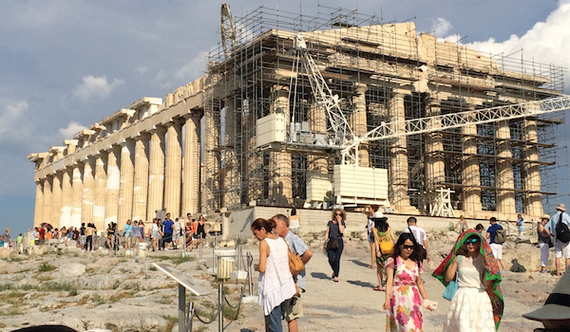 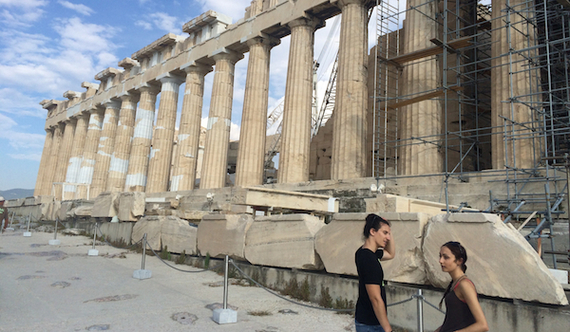 The Acropolis and its museum in Athens are grander than imagined.
Photo: The Stewardship Report.

The Island of Evia on the Mediterranean in central Greece was also an absolute delight. Beginning in its capital Halkida, we journeyed south for skin and SCUBA diving, and then north for the hot springs, enjoying incredible, fresh cuisine from the garden and sea from one end of the long island to the other. To the south in Limionas, our group explored the breathtaking underwater Purple Caves, followed by lunch in a traditional Greek taverna. 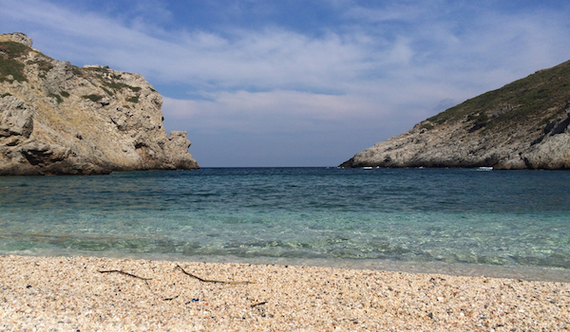 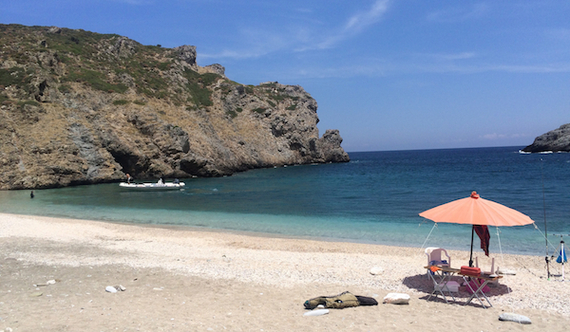 The beaches in south Evia feature crystal-clear waters and seafood tavernas
to die for. Photo: The Stewardship Report.

In north Evia we visited the Greek Orthodox cathedral of St. John the Russian where we saw his remains. We then relaxed in the beautiful seaside village of Limni, before heading to the renowned resort town of Edipsos for its spa and dinner with its mayor, a particularly sharp woman. 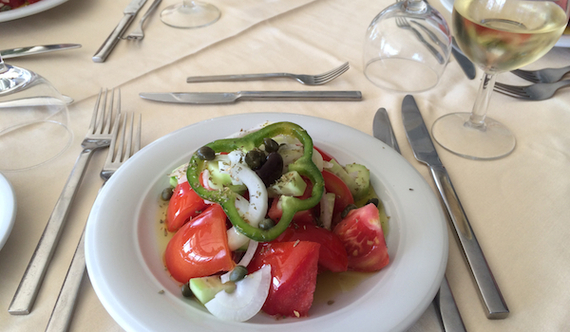 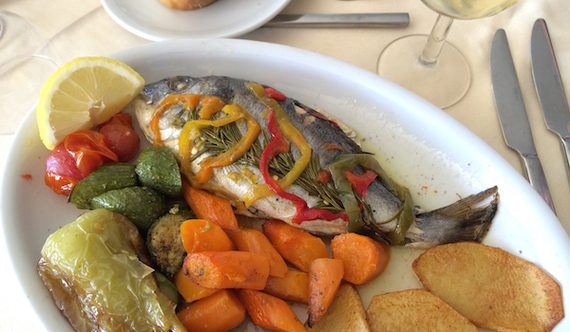 Everywhere we went in Greece offered delicious fresh food from the garden and sea.
Photo: The Stewardship Report.

A guest of the Greek government, I had the opportunity to meet government officials at virtually every stop. Seemingly half of them belonged to the Prime Minister's party, the other half not. They were all united, however, in their desire to see Greece survive.

As the Minister of Tourism, Elena Kountoura, has said, "Tourism should and does unite all Greeks in the great undertaking to resurrect the country and the economy." 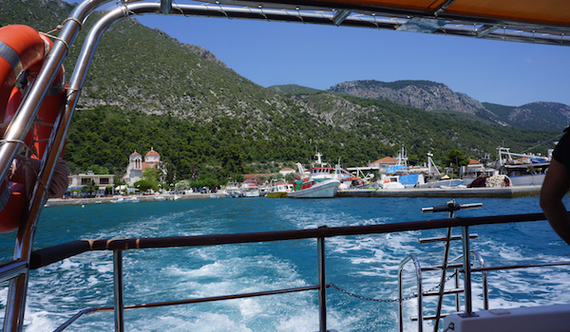 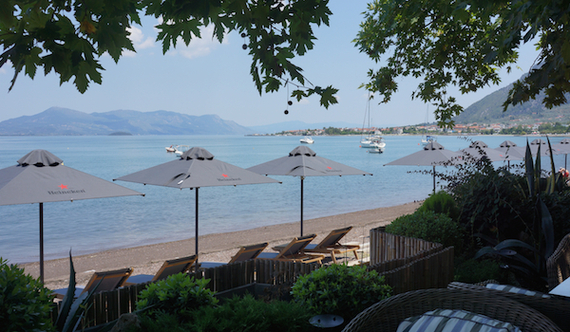 In North Evia, the waterfront of each village is particularly spectacular.
Photo: The Stewardship Report.

We headed by ferry back to the mainland, arriving at the port village of Edispsos and driving to Kammena Vourla. Here we stayed at one of the nicest hotels we encountered, the Galini Wellness Spa. The hot salt waters and mud bath are amazing.

Again, we had the opportunity to meet more governors and deputy governors, despite their hectic schedules leading up to the hastily-called election on whether to accept Europe's austerity programs - or not. All, from both sides of the political aisle, were completely committed to the future of Greece. I have never witnessed such cooperation in the face of adversity. 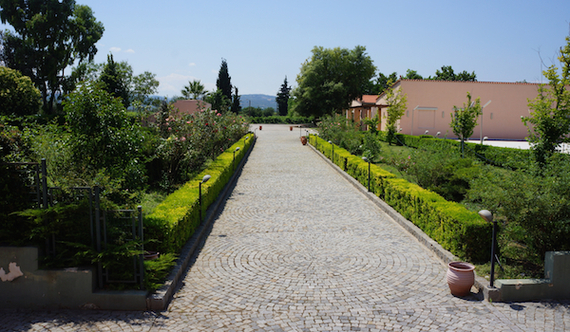 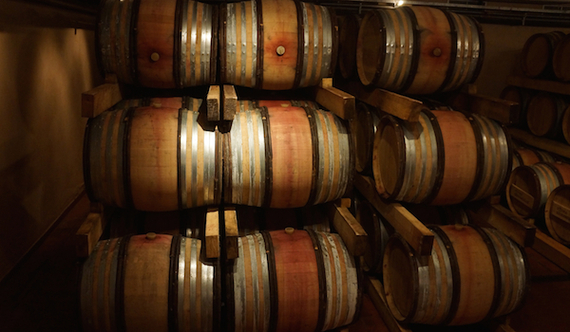 Then back to tourism with a visit to the Atalanti Winery, known internationally for the Hatzimihali family wine label. We saw it all, ending in bottling our own mixture of wine and enjoying another mouth-watering Greek lunch, complete with the ubiquitous Greek salad - so much better than those here in New York.

Meeting with members of the board of the Hotel Association of Lamia, we discussed the political situation over dinner late into the evening. They were deeply concerned but not panicked. They know that, no matter what, Greece will remain safe, affordable and a great experience for travelers. 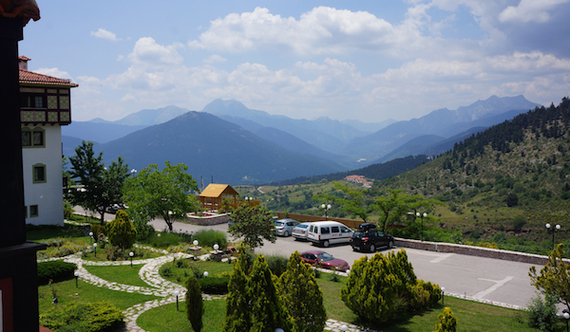 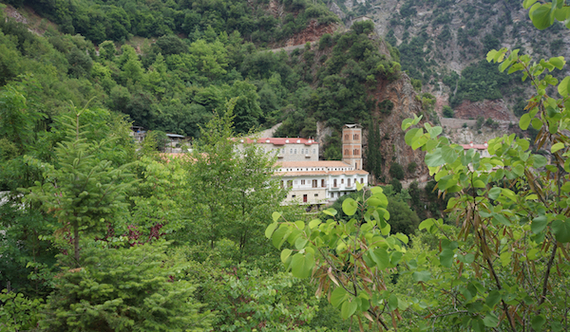 The Mountain Region of Karpenisi is the "Alps of Greece," featuring year-round ski
lodges and historic Greek Orthodox monasteries. Photo: The Stewardship Report.

I was unprepared to visit the "Alps of Greece" - the mountain region of Karpenisi and home of the head of the regional government Kostas Bakoyiannis who impressed me greatly. I knew theoretically that Greece has mountains in the north, but wow! We stayed at another great property, the Hotel Spa Montana, and I felt like we were in Switzerland but with better food. The high-altitude air there is considered to be among the purest in the world.

On July Fourth we did something untraditional - we visited the ancient site of Delphi, home of the much-studied oracle. This and the Acropolis were my two favorite attractions, although the beaches and mountains are rivals. 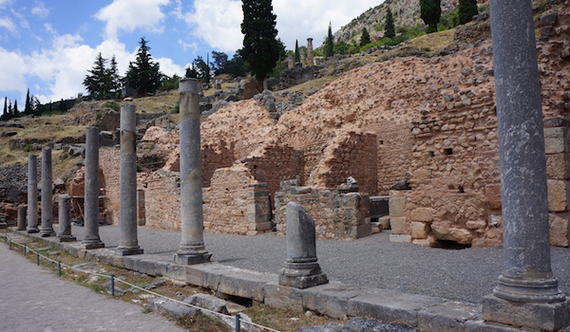 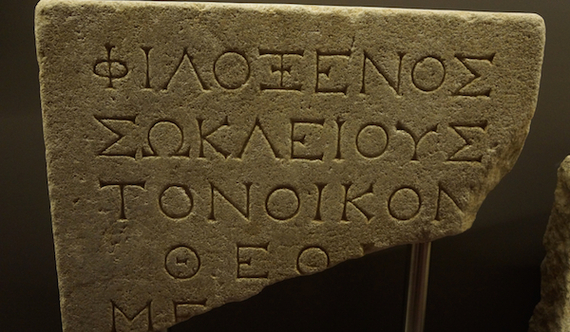 Delphi and its museum were smaller than that at the Acropolis but equally riveting.
Photo: The Stewardship Report.

The Greek National Tourism Organization says, "Once you sample a taste of the very unique Greek lifestyle you are magically drawn in and cannot wait to book your next trip." As hokey as that sounds, I agree - it's true! 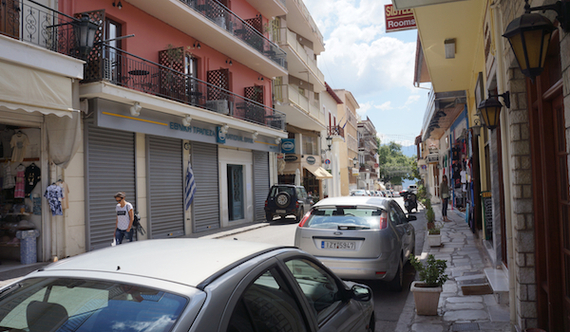 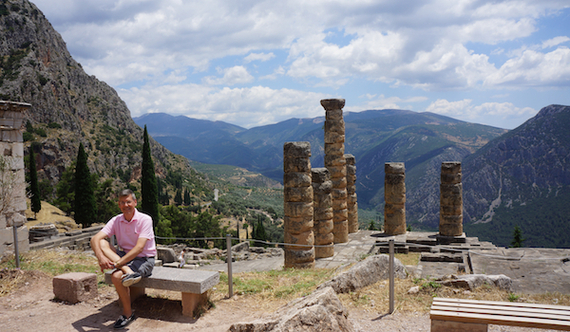 The main street of Delphi is primarily restaurants, boutique hotels, and souvenir
stores. Below, the author at Delphi. Photo: The Stewardship Report.

I look forward to my next trip as I really want to write on Greece as a destination for gay honeymoons, how safe Greece is for the single woman traveler, and how affordable it is to earn a graduate degree (in English) and retire in Greece. Greece - more beautiful then ever.

Voting Made Easy
Register to vote and apply for an absentee ballot today
Register now
More:
mediterraneanathenstourismEuropegreek-salad
Newsletter Sign Up
An essential daily guide to achieving the good life
Subscribe to our lifestyle email.
Successfully Subscribed!
Realness delivered to your inbox