By Michele Kambas and Lefteris Papadimas

ATHENS, July 3 (Reuters) - Greeks took to the streets in their tens of thousands on Friday in rival rallies that laid bare the deep divide heading into a referendum that may decide the country's future in Europe's single currency.

Prime Minister Alexis Tsipras, elected in January on a promise to end six years of austerity, extolled the nation in a televised address to reject the tough terms of an aid deal offered by international creditors to keep the country afloat.

His European partners say a 'No' vote will jeopardize Greece's membership of the euro.

Tsipras says they are bluffing, fearing the fallout for Europe and the global economy. But a 'Yes' vote may bring him down, ushering in a new period of political instability for a country reeling from five days of shuttered banks and rationed cash withdrawals.

Repeating his assault on European partners he accused of blackmailing and issuing ultimatums to Greece, the leftist leader called for calm.

"On Sunday, what is at stake is whether we will give our consent to the slow death of the economy."

His opponents accuse Tsipras of gambling Greece's future with a rapid-fire plebiscite that a major European rights watchdog says falls short of international standards of fairness.

Three opinion polls published on Friday had the 'Yes' vote marginally ahead; a fourth put the 'No' camp 0.5 percent in front, but all were well within the margin of error.

"We know that the lenders will close the door if we say no, but we must fight," said 65-year-old pensioner Irini Stavridou, attending the 'No' rally on the capital's central Syntagma square.

"We must fight not only for Greece but all the people in Europe, for those who just have a different opinion." 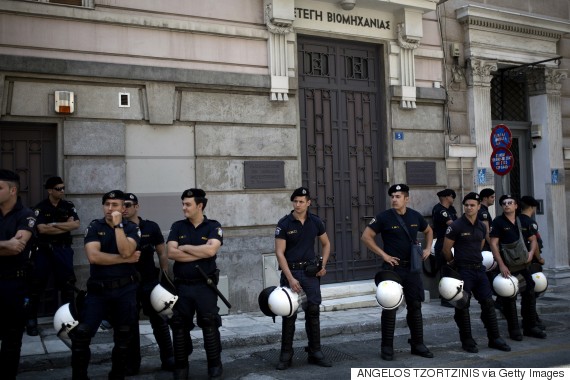 Greek riot police block the entrance of the Federation of Greek Industries during a demonstration in Athens on July 3, 2015. (ANGELOS TZORTZINIS/AFP/Getty Images)

On Syntagma, patriotic songs blared out over loud speakers. The 'Yes' camp rallied in front of the old Olympic Stadium to Beethoven's Ode to Joy, the anthem of the European Union.

"I prefer to vote 'Yes', have a few more years austerity and give my child a better future," said jobless economist Marina Peppa, 45. "It's not going to be easy, but if 'No' prevails we'll have Armageddon, total poverty."

Tsipras seized on a report by the International Monetary Fund - which argued that Greece's massive public debt could not be sustained without significant writedowns - as vindication of his rejection of the lenders' terms.

Finance Minister Yanis Varoufakis called the IMF report "music to our ears." Regardless of the outcome of the referendum, Greece will need some 50 billion euros as well as a massive debt writedown, the report said.

European policy makers, however, fired fresh warnings of the costs of a 'No' vote in a plebiscite called at just eight days' notice after the breakdown of talks with the European Commission, the IMF and the European Central Bank.

"If the Greeks will vote 'No', the Greek position is dramatically weakened," Juncker told a news conference. 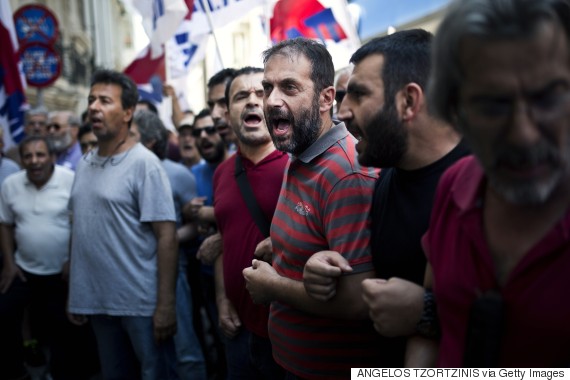 Supporters of the Greek Communist Party shout slogans during a demonstration outside the Federation of Greek Industries in Athens on July 3, 2015. (ANGELOS TZORTZINIS/AFP/Getty Images)

Tsipras is betting Europe will compromise rather than let Greece slip out of the euro zone. But behind the rhetoric, there were more concrete signs of the pressure Europe can exert on Greece.

The euro zone's rescue fund, Greece's largest creditor, said it was reserving the right to call in 130.9 billion euros of debt ahead of time after Athens defaulted on an IMF loan.

With banks shuttered all week, cash withdrawals rationed and commerce seizing up, Sunday's ballot could decide whether Greece gets another last-ditch financial rescue in exchange for more harsh austerity measures or plunges deeper into economic crisis.

Tsipras' opponents have pointed to the fact that the referendum is on a deal that is no longer on the table, accusing him of recklessly endangering the country's future.

Greece's top administrative court, however, rejected an appeal against the referendum by two Greek citizens, who argued that the constitution bars plebiscites on fiscal issues and that the question is too complex.

The 'No' campaign has directed much of its venom at Germany, the euro zone's dominant power and Greece's biggest creditor.

One poster plastered in central Greece shows a picture of German Finance Minister Wolfgang Schaeuble with the slogan: "For five years he's been sucking your blood. Tell him NO now." (Additional reporting by James Mackenzie in Athens, Julien Ponthus and Ingrid Melander in Paris and David Chance in Washington; Writing by James Mackenzie and Matt Robinson; editing by Anna Willard)