WASHINGTON -- When Hillary Clinton called on European leaders Tuesday to “exert every effort to find” a solution that keeps Greece in the eurozone, one of the reasons she cited was her domestic constituency. “The United States has a great, active, successful Greek-American community. So I want to see a resolution,” she said.

But The Huffington Post’s interviews with several Greek-Americans from diverse backgrounds reveal a community divided on the causes of -- and solutions to -- Greece’s troubles. They are united only in their deep concern for the future of their ancestral homeland -- and their commitment to sending Greece generous humanitarian aid.

George Ramakis is a case in point. Immigrating to the United States in 1975 from a town near Sparta, Ramakis now owns City Watchmaker, a small but successful watch and jewelry repair business in downtown Washington, D.C. Ramakis is an immigrant success story, like many Greeks who preceded him. He has enough income to visit his family in Greece regularly, and is married to another American newcomer from Abu Dhabi with whom he has two young children. Ever the hardworking craftsman, Ramakis is reluctant to look up from his cluttered worktable -- let alone comment on politics.

But when it comes to the current situation in Greece, Ramakis is unequivocal. He sees Greece as the victim of exploitation at the hands of Germany. “If you ask me, Germany tried to rule Europe with a gun in World War II, and now they are trying to do it with money,” Ramakis told HuffPost. Though Ramakis’ sentiments are strong, his tone is even and deliberative, and his voice is raspy and soft. “They have made Greece cut everything and look what happened? Now unemployment is way up.”

And unlike Clinton, Ramakis wants Greece to leave the eurozone for its own self-interest. “They take a new deal that does more of the same, and nothing will be left,” he said. “It will be there for Germany to control.”

Leaving the euro, Ramakis said, “will be very hard at first, because everybody’s money will be worth less, but it is worth it in the end.” 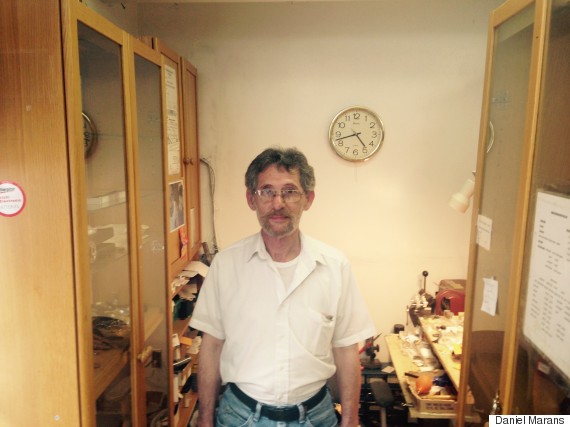 Ramakis is one of nearly 1.3 million Americans who reported having Greek ancestry in 2013.

There is no known polling data on Greek-Americans’ views of the current Greek debt crisis. Instead, there are the positions of major Greek organizations and the views shared by individual people.

HuffPost reported on Friday that the major Greek-American political action organizations have lobbied the U.S. government to help Greece get better terms on its debt from the country’s international lenders, though all appear to officially support Greece’s continued membership in the eurozone. (Arianna Huffington, HuffPost's editor-in-chief, is one Greek-American who has made no secret of her disdain for the austerity policies imposed on Greece since 2010.)

The leaders of political action groups like the Hellenic American Leadership Council believe that the Obama administration’s reluctance to intervene in a crisis in which it is not directly involved has limited their ability to leverage their influence to help Greece politically.

But another challenge may be that these organizations, committed as they are to helping the Greek government vis-à-vis its creditors, may not represent the views of either "Grexit" proponents like Ramakis, or conservative critics of the current government.

For example, Antonis Diamataris, who publishes the National Herald, the major bilingual newspaper of the Greek-American community, has written multiple editorials arguing that the Greek government’s efforts to try to get a deal from its creditors are effectively naive and unrealistic. Diamataris wrote on Wednesday that the “no” vote in the referendum on the creditors’ bailout proposal amounted to committing national suicide, and described the majority of Greeks who supported it as living in a “land of ‘Let’s Pretend.’”

People familiar with the paper version of the National Herald told The Huffington Post that Greek-American multi-millionaire Angelo Tsakopoulos took out a full-page ad in the paper in support of a “yes” vote in the referendum. 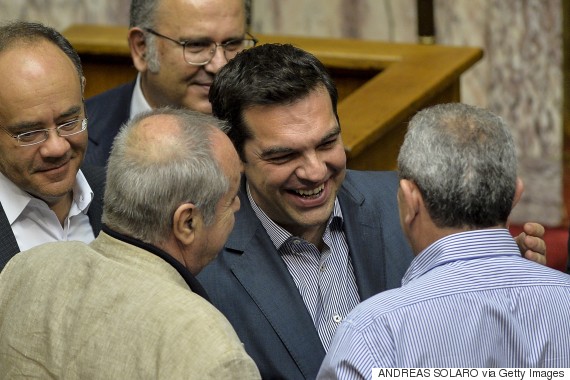 Greek Prime Minister Alexis Tsipras is congratulated by coalition members after parliament voted to approve a new bailout deal on July 10. Greek-Americans are at odds over how Tsipras has handled the debt crisis. (ANDREAS SOLARO/AFP/Getty Images)

Peter Moskos, who co-authored the book Greek Americans: Struggle and Success with his father, Charles, says that while Greek-Americans’ views on the Greek crisis do not always break down neatly along demographic or economic lines, Greek-Americans who have been in the U.S. for generations are less likely to be sympathetic to the Greek government's position. They have achieved economic success, enjoying incomes that are 30 percent higher than the median U.S. household. And like many Americans, they may be more likely to blame the profligate behavior of successive Greek governments for the current mess than Germany or other eurozone creditors.

A particularly funny embodiment of the disconnect between Greek-Americans who have been in the U.S. and their peers in Greece came from Greek-American comic Tina Fey. Fey returned as a guest on Saturday Night Live’s Weekend Update on May 8, 2010. “Really, Greece?! I love you, but you need to make some changes. Your retirement age is 54,” Fey deadpanned. “Greek people in America work the register at the diner until they die.”

By contrast, Moskos says, more recent arrivals are more likely to be left-leaning individuals who fled political persecution at the hands of Greece’s U.S.-backed military junta, which ruled from 1967 to 1974. They are also more likely to retain strong personal and family ties to Greece, and thus care more about what is going on in the country.

Ramakis is representative of that later wave of Greek immigrants. He left Greece in 1975 because he did not want to serve in the Greek army after seeing how they had violently repressed student protests during the junta years. Ramakis had been in college then and had many close friends in activist circles. Although Ramakis later returned to Greece for military service in the late '80s and early '90s, he said that memories of the junta have shaped his resistance to anything that smacks of coercion -- including Germany’s demands for austerity.

If you ask me, Germany tried to rule Europe with a gun in World War II, and now they are trying to do it with money. George Ramakis, Washington, DC

Still, the crisis in Greece is such a uniquely complex public policy issue that it sometimes elicits conclusions from Greek-Americans that defy traditional political affiliations and ideologies. Peter Marudas was chief of staff to Sen. Paul Sarbanes (D-Md.) for decades, and is a self-described “ultraliberal”: He supports single-payer health care, and wishes the stimulus bill had been bigger.

But Marudas blames the Greek government for the current mess and welcomes major reforms. No fan of the timing and scale of the fiscal austerity foisted on Greece, Marudas nonetheless believes that the “tight leash” from Greece’s lenders could have given successive Greek governments political cover to root out corruption and patronage.

Marudas is in touch with the plight of the Greek people. He returned from a 34-day stay in Greece at the end of June, and he visits regularly. His wife’s brother and many first cousins live there. He has seen the rising levels of poverty. Marudas and his wife are concerned about how the economic turmoil will affect her brother, who is 80 and lives alone.

“They got a lot of money when they joined the EU. And I thought it would cause a lot of reform in Greece,” Marudas said. “Weakness in the Greek public administration and public sector -- and tax avoidance in private sector -- would be corrected. Well, they weren’t. A lot of that money was used for patronage and not investments.”

They got a lot of money when they joined the EU. And I thought it would cause a lot of reform in Greece. Weakness in the Greek public administration and public sector -- and tax avoidance in private sector -- would be corrected. Well, they weren’t. A lot of that money was used for patronage and not investments. Peter Marudas, retired Senate staffer

Other Greek-Americans are hesitant to weigh in on the political dimensions of the crisis altogether. Connie Mourtoupalas, president for cultural affairs of the National Hellenic Museum in Chicago, understands both the critique of Europe’s austerity policies and the ways in which the Greek government’s overgrown bureaucracy can stifle economic opportunity. She moved with her family to the United States as a young girl in 1966, and later returned to live and work in Greece for many years as an adult.

But when it comes to exactly which measures Greek citizens should accept from their creditors, or whether the country should stay in the eurozone, Mourtoupalas defers to her friends and family in Greece.

“I think however much it can be upsetting to us and our hearts ache, it is ultimately a decision of people who are going through it,” she said.

Mourtoupalas does believe, however, that one of the silver linings of the crisis has been a resurgence of solidarity among Greek people worldwide.

Indeed, regardless of their political opinions, Greek-Americans have opened their hearts and their wallets to their brethren in Greece. The New York-based Stavros Niarchos Foundation, for example, has distributed over 100 million euros in socioeconomic aid to Greece since 2012, and has committed to delivering an additional 100 million euros from June 2015 to June 2016.

And they are not just contributing money, but also facilitating economic opportunities. The Hellenic Initiative, a philanthropic organization formed in 2012 specifically to assist Greece’s economic recovery, convened a fair in Athens on June 25 to connect nascent Greek startups and young companies with international investors. (Full disclosure: Arianna Huffington is on the Hellenic Initiative’s board of directors.)

Mourtoupalas attributes the solidarity to the deep cultural and familial bonds of the Greek people.

“If you are Greek, wherever you go -- if you are in the middle of the jungle -- you just look for another Greek, and you have a sense of belonging,” she said.

CORRECTION: A previous version of this story said Peter Marudas was chief of staff to the late Sen. Paul Sarbanes. The former senator is still living. We regret the error.