BUENOS AIRES -- When Greece held elections last January, the country faced an existential choice: give a new term to the pro-European center-right government or take its chances with a revolutionary party led by the charismatic Alexis Tsipras. Syriza was eager not only to renegotiate with Europe but also backtrack on sensible changes like education reform.

Back then, Greece's economic reforms had started to bear fruit. The economy was growing, faster than Germany for two quarters, and jobs were being created. When voters chose Tsipras's Syriza, it put the country on a path toward becoming Argentina, which, after a decade of populist rule, has become an impoverished, isolated country mired in stagflation.

Misled by a dishonest campaign and egged on by irresponsible commentators, Greece made its choice. And now we see the results. Five months into Syriza's reign, the country is once again descending into socioeconomic chaos. On Sunday night, the government imposed an extended bank holiday and instituted capital controls as well as draconian limits on cash withdrawals, throwing the economy off a cliff.

If one looks at the facts beneath the populist rhetoric, it becomes plainly obvious that it did not have to be this way. Unlike in Argentina in 2001, creditors did not pull the plug; an irresponsible Greek government did.

"Unlike in Argentina in 2001, creditors did not pull the plug; an irresponsible Greek government did."

As late as Friday night, negotiations between Greece and its creditors were ongoing; the differences between the two sides were minimal. Suddenly Greece withdrew from the negotiating table unilaterally; the prime minister announced his intention to put the question of accepting an earlier draft of the deal directly to the Greek people in a referendum to be held in a week's time.

Do not be fooled by empty rhetoric about democratic choices. Tsipras had informed no one of this choice, including his own negotiating team, which is rumored to have found out via Twitter. After months of denying it and with hours before default, Tsipras proposed a referendum on whether to accept an unofficial working draft with European institutions that had already been superseded by a new consensus offer. In so doing Syriza made a mockery of the country's constitution, which explicitly forbids referenda on fiscal matters.

Why? The deal on the table would likely have passed parliament, but the prime minister would have faced mutiny in his own party, where a hard-left group of Stalinists and unreformed Marxists were always eager to torpedo a deal. Receiving the support of the opposition would have put an end to the government. Faced with a choice between losing power and economic doom, Tsipras put party over country.

Only with the support of the xenophobic Independent Greeks and the openly neo-Nazi Golden Dawn did parliament agree to set the referendum. Who could sensibly rely on both Stalinists and neo-Nazis to support something that populists defend as "democratic"? Paraphrasing Marx himself, the tragedy quickly becomes farce: while ordinary Greeks began to queue outside closed banks, Syriza's own ministers were seen withdrawing their money from the well-stocked ATMs inside parliament.

With people hoarding fuel and raiding supermarkets, Tsipras and team now insist this is all Europe's fault for not offering a better deal. But it is Syriza that has demonstrated nothing but incompetence over the last five months of negotiations. In fact, European finance ministers suggested a referendum back in April and May, in ways that would have fulfilled Greece's constitutional requirements. Now it all has to be done in haste and against the law.

Argentina's collapse in 2001 left profound social and political scars; it is sad that Greece is going down the same road. Greeks now face the prospect of prolonged capital controls, severe political unrest and eventually a confiscation of ordinary citizens' savings to finance a government's withdrawal from the world. And the announcement of the destabilizing referendum at the height of the tourist season is sure to sabotage the country's strongest industry. With the banks closed for at least a week, the economy will go sharply into reverse.

As in Argentina, it is the poorest who will suffer the most. Rich Greeks have had their money abroad for years, if not generations. Pensioners, many of whom do not have debit cards, will not have access to their money this week. Ordinary employees will be able to withdraw €60 per day at most banks -- many will not be able to make rent payments in time. But the entrenched interests that Syriza protects will go unscathed.

"As in Argentina, it is the poorest who will suffer the most."

This road to economic hell is not paved with good intentions -- it is paved with gross incompetence. But unlike Argentina in 2001, Greece still has a choice. The eurozone has left the door open for a return to the negotiating table, and the chaos of bank closures and imminent shortages could still be reversed. If the referendum does indeed come, Greeks are most likely to side against their incompetent and grossly irresponsible government.

The worst byproducts of economic crises are not measured in numbers but in lives -- lost jobs, lost opportunities, lost dignity. The saddest thing about this week's economic collapse is that it was unnecessary. It is the fault of politicians who put their own political careers ahead of the common good.

The recently introduced roadmaps for Europe preview further economic, monetary and political integration to benefit all member countries. Greece belongs in Europe, not isolated from it.

Greeks should remind their misguided government that it is not Alexis Tsipras's right to deprive them of a European future.

The Incompetent Greek Government, Not Its Creditors, Pushed the Economy off the Cliff
Athens' Badass Street Art 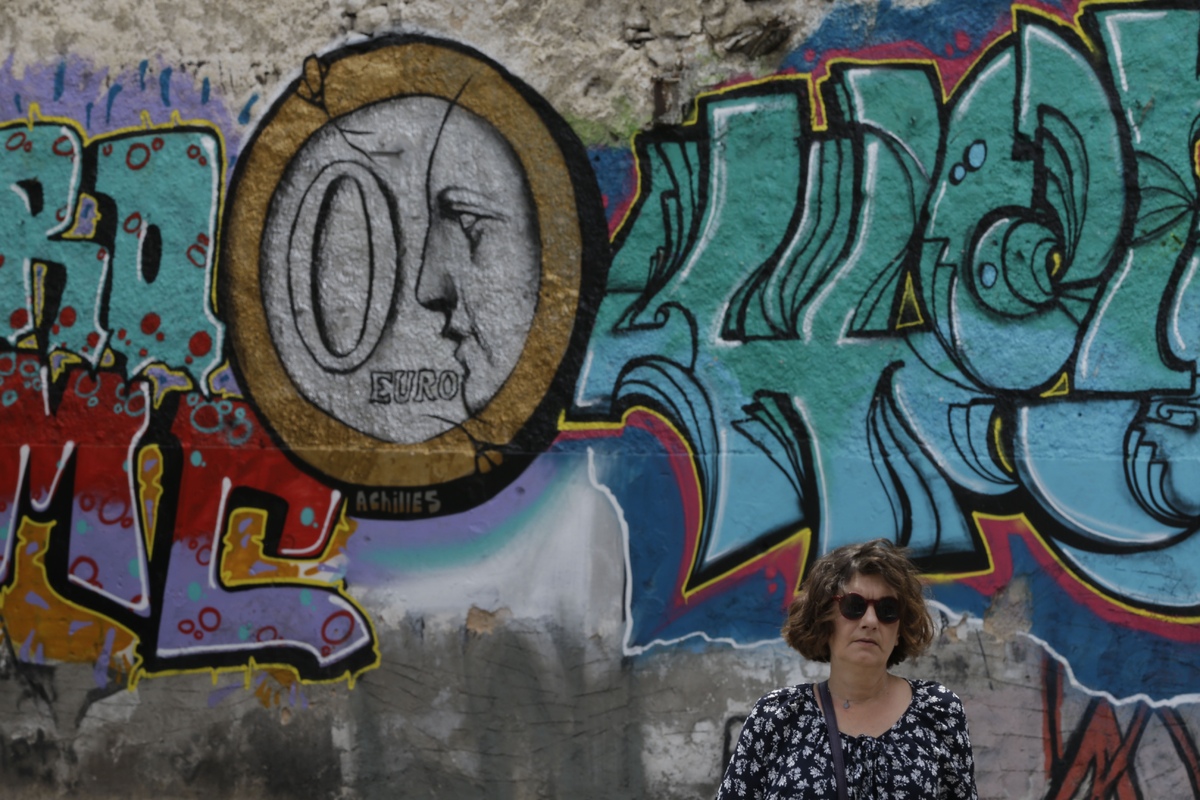