But it was unclear whether the communist-rooted party, led by 40-year-old Alexis Tsipras, had won by a big enough margin over Prime Minister Antonis Samaras' incumbent conservatives to govern alone. For that, they need a minimum 151 of parliament's 300 seats.

Official results from 17.6 percent of polling stations counted showed Syriza with 35 percent and Samaras' New Democracy with 29.3 percent. An exit poll on state-run Nerit TV projected Syriza as winning with between 36 and 38 percent, compared to ND with 26-28 percent. 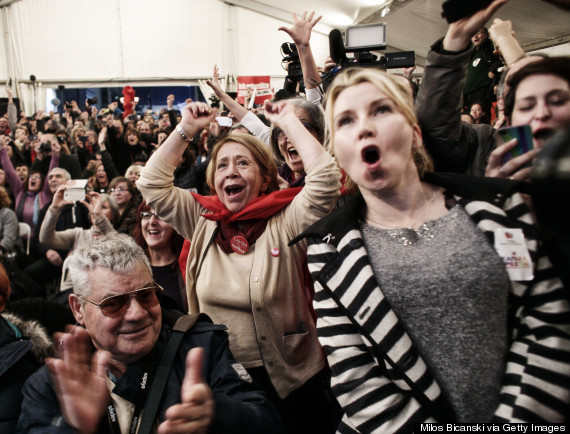 Supporters of the opposition radical leftist Syriza party cheer at exit poll results which indicate that Syriza have a clear lead on January 25, 2015 in in Athens, Greece. (Photo by Milos Bicanski/Getty Images)

Earlier projections had given Syriza 146-158 seats in parliament, and New Democracy 65-75 seats.

Outgoing Prime Minister Samaras conceded defeat late on Sunday, and called Syriza's Tsirpas to congratulate him on the victory.

Tsipras has promised to renegotiate the country's 240 billion-euro ($270 billion) international bailout deal, and seek forgiveness for most of Greece's massive debt load. He has pledged to reverse many of the reforms that creditors demanded — including cuts in pensions and the minimum wage, some privatizations and public sector firings — in exchange for keeping Greece financially afloat since 2010.

As Tsirpas went to cast his vote in Athens, youth activists from his Syriza party were heard to chant "the Left's time has come!"

"What's clear is we have a historic victory that sends a message that does not only concern the Greek people, but all European peoples," Syriza party spokesman Panos Skourletis said on Mega television. "There is great relief among all Europeans. The only question is how big a victory it is."

Skourletis said the election results heralded "a return of social dignity and social justice. A return to democracy. Because, beyond the wild austerity, democracy has suffered." He stated that Syriza's victory "sends a message against austerity and in favour of dignity and democracy."

Syriza's anti-bailout rhetoric appealed to many in a country that, in the past five years of its acute financial crisis, has seen a quarter of its economy wiped out, unemployment of above 25 percent, and average income losses of at least 30 percent.

But it has also renewed doubts over Greece's ability to emerge from its financial crisis, and fears that the country's finances could once again send shockwaves through global markets and undermine the euro, the currency shared by 19 European countries. 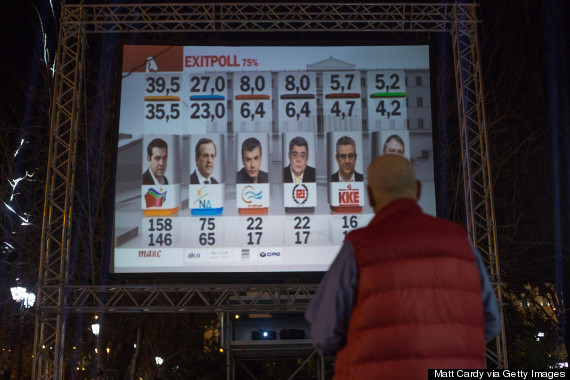 People look at a giant screen showing a exit poll on January 25, 2015 in Athens, Greece. (Photo by Matt Cardy/Getty Images)

Samaras' New Democracy party conceded defeat not too long after the exit poll was announced.

"We lost," Health Minister and conservative party parliamentary spokesman Makis Voridis told private Mega TV, adding that the extent of the defeat wasn't yet clear. He said the government's austerity policies, implemented to secure vital international bailouts, "make sense" but were cut short before they could bear fruit.

"It is evident the Greek people believed there is another way forward than the one described by the government," he said. "For the good of the country, I hope they are right."

Greeks have faced years of austerity measures, including cuts in wages, pensions and government spending, and tax increases.

Greece's creditors insist the country must abide by previous commitments to continue receiving support, and investors and markets alike have been spooked by the anti-bailout rhetoric. Greece could face bankruptcy if a solution is not found, although speculation of a "Grexit" — Greece leaving the euro — and a potential collapse of the currency has been far less fraught than during the last general election in 2012.

"There is an expectation of economic relief for many, of a reboot of the economy and there will be a new debate on the servicing of the debt," Syriza's Skourletis said. "Europeans have accommodated themselves with the idea."

Hundreds of people turned out to celebrate outside Syriza's main electoral kiosk in central Athens, waving flags and cheering.

The centrist Potami (River) party was battling for third place with the Nazi-inspired, extreme right-wing Golden Dawn, whose leadership is in prison pending trial for running a criminal organization. Both were projected as being between 6 and 7 percent. Early official returns showed Golden Dawn slightly ahead with 6 percent, compared to Potami's 5.6 percent.

If Syriza falls shy of the 151 seats necessary to form a government on its own, it will have to seek support from other parties — either in a minority government or as a coalition.

Derek Gatopoulos in Athens contributed to this report.