Greece's Syriza party is set to win a convincing victory in the national election, as the last of the votes are still being tallied. The projected result marks a degree of vindication for leader Alexis Tsipras, who looks set to return to the post of prime minister that he held until late last month.

The head of the opposition New Democracy party, Vangelis Meimarikis, conceded defeat after Syriza took a sizable lead early in the counting. With 80 percent of ballots counted, Syriza is expected to win around 35 percent of the vote, The Associated Press reported.

In a speech in Athens following the election, Tsipras appeared jubilant in victory, declaring that the result gave him a clear mandate to lead. He also warned of tough times ahead for Greece's economic recovery.

"In Europe today, Greece and the Greek people are synonymous with resistance and dignity, and this struggle will be continued together for another four years," Tspiras said, according to Reuters.

Sunday's vote was Greece's third of 2015, following parliamentary elections in January and a national referendum on the country's bailout agreement with international creditors.

Turnout in the election was low compared to past elections, as millions of Greeks cast their ballots in what polls had predicted would be a close race. Tsipras held a commanding lead early in the campaign but saw support dwindle as the election approached. A poll on Wednesday showed that Syriza's main rival, the center-right New Democracy party, had gained a slight edge in the race.

On election day, however, voters seem to have come out to favor Tsipras, who had triggered Sunday's snap election as a means of consolidating power following a July rebellion from party members who opposed accepting a third bailout from creditors.

Syriza's brazen former finance minister, Yanis Varoufakis, was among the opponents of the bailout deal and on Sunday criticized the elections in the Greek media.

The bailout and the overall derelict state of the nation's economy were of primary focus for Greek voters. But also important to the debate was Tsipras' handling of the negotiations with Greece's creditors. The Syriza leader was voted into power earlier this year on an anti-austerity platform but ended up caving to harsh reforms as the country faced bankruptcy and a possible eurozone exit.

If Syriza lacks the seats needed for an outright majority, as is projected, it will need to form a coalition government. This will require help from other parties that managed to pass the 3 percent of the vote threshold in order to be represented in parliament.

The right-wing Independent Greeks party, which also partnered with Syriza last election, said on Sunday that it plans to ally with Tsipras again this time around, Reuters reported. The announcement appeared to be confirmed when the leader of the Independent Greeks, Pannos Kammenos, joined Tsipras on stage during Tsipras' victory speech.

A total of eight parties managed to gain enough votes for representation in parliament. The runner-up New Democracy garnered around 28 percent of the vote, while extreme-right anti-immigrant Golden Dawn came in a distant third with 7 percent.

Notably absent is the Syriza breakaway party Popular Unity, which by the end of the day Sunday had failed to surpass the 3 percent it needed in the election.

The new Syriza government will be confronted by the many of the same significant challenges that it faced throughout the year , including a migrant and refugee crisis on its shores, a crippled economy and massive rates of unemployment.

The government must also still pass numerous reforms agreed upon with creditors as part of its multi-billion dollar bailout deal, including sweeping pension reform. 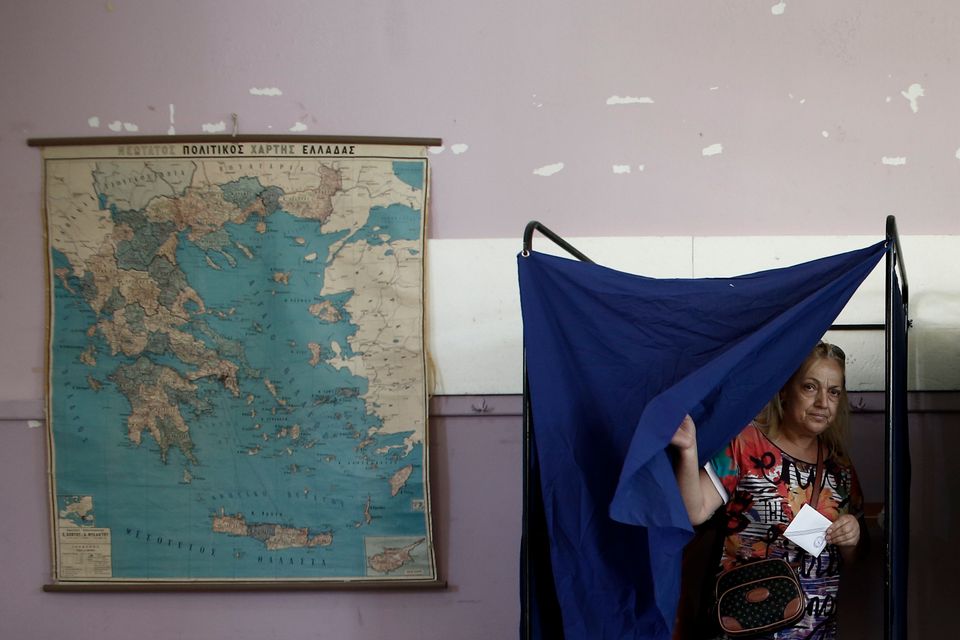