The sermon at the Church St. Paul Thessaloniki ended abruptly one day recently when one of Greece’s most important religious leaders informed the congregation that he was going to vote "yes" on an economic bailout referendum taking place on Sunday.

The Metropolitan Anthimos told the congregation they had the right to vote however they wished, but that he would "vote for Europe" -- at which point the assembly erupted with a mix of responses, some applauding while others shouted objections.

On Sunday, the Greek people will be voting on whether to accept the terms of a bailout offered by Greece's European Union creditors that includes the continuation of the severe austerity measures that have resulted in resentment and economic hardship in the country. It is expected to be a close vote, with the current polling numbers showing an almost even split between the "yes" and "no" votes. The closeness of the numbers and the sense of what is at stake have led to intensifying political activity. Prime Minister Alexis Tsipras is urging a "no" vote, and Finance Minister Yanis Varoufakis has pledged to step down if the Greek people do not reject the bailout terms.

On the other side, the head of the Orthodox Church, Archbishop Ieronymos II, has thrown the weight of his office behind the "yes" vote. In a statement released Wednesday, the archbishop wrote: "We have to promise our children a Greece of growth and progress. A Greece that will move on with self confidence and safety, flesh of the flesh of the hard core of the common European family."

The vast majority of Greeks identify as Orthodox, and the church is in the constitution as the prevailing religion of the country. "The Church in Greece is omnipresent," explained Father Dan Skvir, the Orthodox Christian Chaplain at Princeton University. "There are one or two churches on every block. It is obviously a critical player, and its voice is listened to."

Not all Orthodox priests are lining up behind the archbishop. At a recent pro-government rally in Syntagma Square in Athens, priests protested the austerity measures outside the Greek Parliament.

However, it appears that within the Greek Orthodox Church, the upper levels of the hierarchy are publicly supporting the European bailout and warning against the exit of Greece from the European Union or the eurozone.

Dr. Elizabeth H. Prodromou, who teaches at the Fletcher School of Law & Diplomacy at Tufts University, points to two important factors. The first is the religious ties the Orthodox Church has with Europe: "The Church of Greece sees Orthodoxy as part of the European fabric and history and understands Greece to be an important part of the European project."

The Orthodox Church fears that a "no" vote could lead to the exit of Greece from Europe, where it historically belongs.

Prodromou suggests the second reason church leaders are supporting the "yes" vote is that they feel the humanitarian crisis would grow much worse if Greece were to exit the eurozone. While not all Greeks are enthusiastic about the Orthodox Church, there has been general consensus that the church has played an important role in recent years as Greek society has suffered under the austerity measures. The church maintained massive food distribution operations around the country and provided job training and shelter for Greek citizens, as well as for the growing immigrant population.

This humanitarian concern led Greek Orthodox Church officials to write a letter in 2011 to the president of the European Commission, José Barroso, in which they protested the hardships the Greek people were being made to suffer. "It would be a scandal if European leaders did not take the cries of simple citizens into account and if these very citizens of Europe were threatened like expendable products," they wrote.

Perhaps most of all, the church fears the splintering of Greek society amid increasingly harsh rhetoric. Given Greece's history of civil war and factionalism, the potential for national schism in Greece is real, reminds Prodromou. More than anything, the Archbishop Ieronymos II's statement encouraged citizens to remain committed to the nation and to one another:

The times we are living in are maybe the most crucial ones for our Nation since after World War Two. It's a time of responsibility for everyone. For every institution in the country, for the political parties, the church, for each and every Greek. We are all united by the love for our country. The anxiety for its present and its future. Nothing separates us. That is why we must not allow the poison of division contaminate our souls. It will be a crime burdening the next generations. 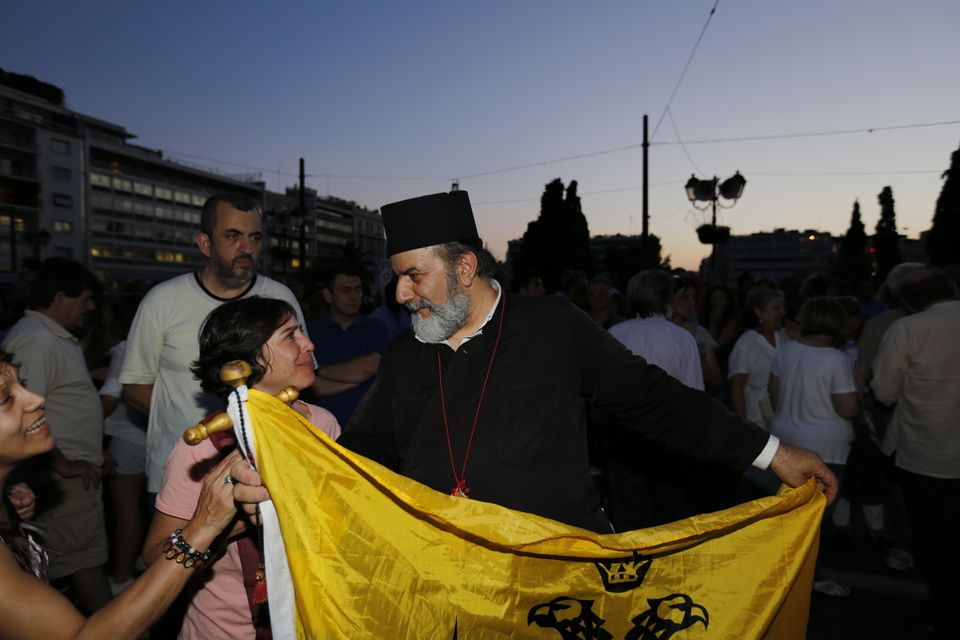 1 / 5
SYNTAGMA SQUARE, ATHENS, ATTICA, GREECE - 2015/06/17: An orthodox priest, carrying a flag of the Greek Orthodox Church, takes part in the pro-government protest. Greeks assembled outside the Greek Parliament, supporting their government against new austerity measures proposed by the IMF and EU, to prevent a Grexit. They called for the right of the Greek society to decide its future itself. (Photo by Michael Debets/Pacific Press/LightRocket via Getty Images)
Pacific Press via Getty Images