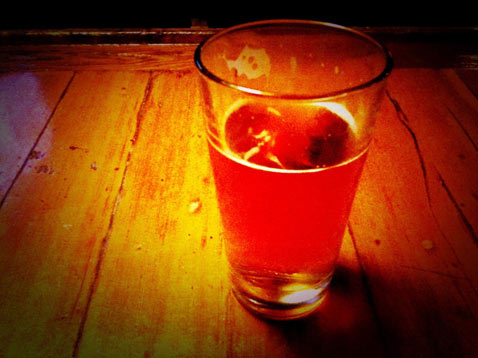 There's an argument to be made that homebrewing is greenbrewing. Crafting your own beer at home lets you create an artisanal product that doesn't need to be shipped by the truckload around the country: saving on fuel and cutting down greenhouse gases. Home brewing also embraces recycling--clever collecting is all you need to acquire all the carboys and bottles you could ever dream of filling. Depending on your level of dedication to small-scale production you could also produce your own ingredients. Grow your own barley, hops, and grains in your garden and raise your own honey in a backyard hive. The possibilities and recipes are endless.

Homebrewing your own beer (or wine) isn't as complicated as it sounds. It involves some whimsical chemistry, sure, but nothing you couldn't handle if you know how to read a thermometer and respect Upton Sinclair's thoughts on sanitization. Kits can be purchases for as little as forty dollars. I found an online home-brewing company called Mr. Beer that sells a reusable two-gallon keg and gives you all the supplies you need to get started on your first batch. (I had no idea how much beer two gallons was until I bottled it last weekend...there is a case of bottles carbonating in my kitchen right now!) If you're interested in something a little less pre-packaged with more room to experiment: home brewing suppliers like Northern Brewer sell beginner kits for well under a hundred dollars. These are also reusable, and let you recycle those old bottles with your own Pale Ale, Wheat brews, and Stouts. Before you know it you'll be inviting over your friends to put a kettle of hops on the stove and cracking open a few earlier-capped bottles. It's certainly a social hobby.

For the urban homesteader (and the backyard recycler) home brewing is quite the scavenge-and celebrate hobby. It keeps a product local, engages your community, involves organic gardening, recycles trash, and gives you the satisfaction of utilitarian creation. I'll raise my glass to that.

Jenna Woginrich is the author of several books on country living and homesteading, and blogs at Cold Antler Farm. Go there to see how her recent brewing adventures turned out.