Green Day's American Idiot recently premiered at West Seattle's ArtsWest Playhouse and Gallery, and the show was as edgy and vibrant as promised in the theater's description.

American Idiot - Forget the theater you think you know
Equal parts house party, opera, rock concert and theater, ArtsWest's immersive, environmental staging explodes beyond the traditional theater space, as a group of lost young Americans take over an entire building and use it to tell their story. 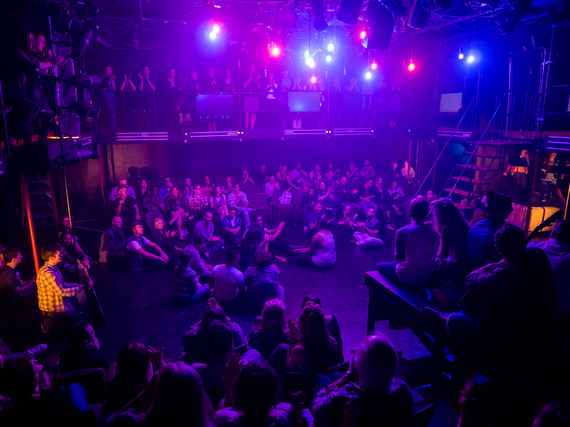 Perspective #1 - First Viewing of the Show - The Immersive Experience

I participated in the "Military Immersive" version, which meant some walking around and seeing things from several distinct vantage points including standing next to one of the main character as he was in the spotlight singing a solo. Our group also went "underground" through a trap door on the stage that led to a room where the "Military Group" actors performed a separate little show for the twenty of us as could also watch what was happening in the main area via a video monitor.

Being in that group did provide me with an opportunity to chat with the show's Co-Choreographer Gabe Corey, who was witnessing the first formal staging of his creation as an audience member. Corey shared how challenging it was to be creating this array of simultaneously occurring dancing and movement (both the cast of thirty-one and the three groups of twenty Immersive Ticket Holders that were constantly being moved) throughout the theater. Still, overall, this constant change really worked to make the show dynamic, vibrant and truly participatory.

And the energy of the ninety-five minute non-stop performance cannot be over stated. These young actors danced and sung their way through a spectacularly complicated production with a confidence and verve that must be seen to be appreciated. Being of an older generation, I felt like I was watching (and participating in) the next generation of the musical Hair. And that's how the show ended, with a Kumbaya-like moment with the cast mingled among the audience singing Green Day's The Time of Your Life.

It was the same show, but I had no concern about where I was moving to or from so I could concentrate on and enjoy the show much more. Only then did I see the true precision of the dance and chorography (both of cast and moving audience members). I also felt more comfortable seeing everything from a single perspective. I am, however, of an older generation who is very accustomed to traditional theater.

I feel that both the Immersive and Observational Perspectives are interesting and viable. Were I to do this all over, I would do the Observational first and do at least one of the Immersive versions a week or so later. Then, I would have the big picture of the performance so I could more fully enjoy being a part of the unique movement of participants.

Regardless of which version you select, go see American Idiot. It's a full out energy rush of talent and raw emotion. American Idiot continues at Seattle's ArtsWest through October 11.