This gorgeous puppy here is a 12-week-old Siberian husky named Jesse. Jesse is deaf, and she's available for adoption through a Virginia rescue group that specializes in special needs dogs. 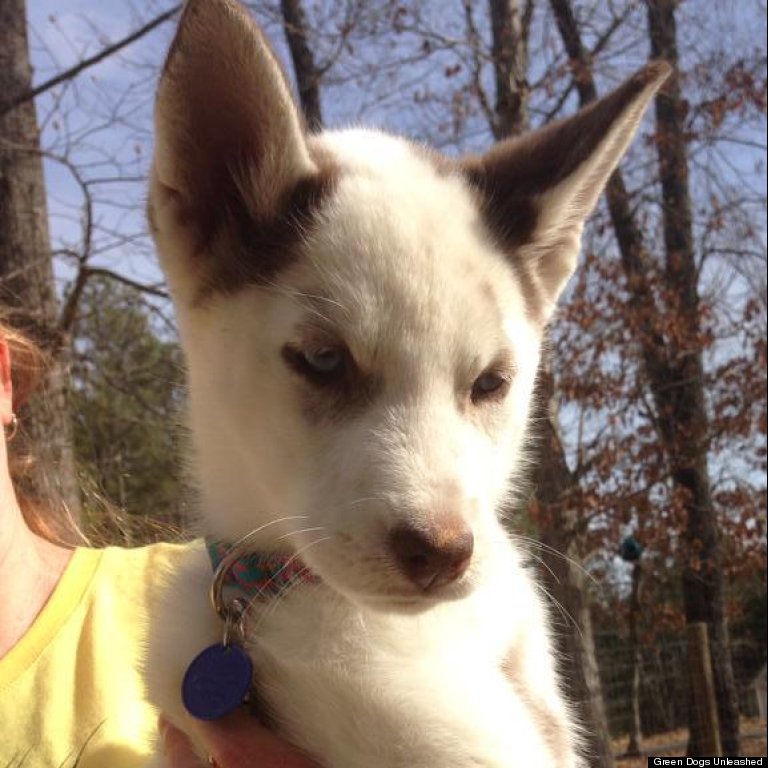 Green Dogs Unleashed -- operated out of Troy, Va., about two hours southwest of Washington, D.C. -- began with one Great Dane puppy whose life could have gone much, much worse.

"Almost seven years ago I watched as a truck drove up and tossed a brick sized white ball out the window and sped off," animal behaviorist Erika Proctor, founder of the group, told The Huffington Post. "I ran to check on what it was, and found a stark white Great Dane puppy lying in the driveway. She was as white as falling snow, and as soft as silk, but she was unresponsive to sound, and had what looked to be permanently squinted eyes."

A veterinarian advised euthanizing the blind and deaf puppy, saying that such dogs do "not live full lives and can become vicious," said Proctor. "It was not going to happen. This most perfect, most pure white creature was just an impressionable infant, who could learn and flourish like any other pup with the proper care and guidance."

Last year, Green Dogs Unleashed became a tax-exempt nonprofit dedicated to the rescue, rehabilitation and placement of special needs animals. Since then, Proctor says, the group has placed around 200 foster dogs, with the aim that many of these will eventually become therapy dogs.

"These animals are able to teach the community about many aspects of overcoming limitations," said Proctor. Her dogs have participated in anti-bullying and fire-safety education and dog safety programs. A very handsome Eskimo pup named Brody even participated in this year's Puppy Bowl. (Brody is not a special needs dog, but "ended up at Green Dogs Unleashed as a baby after his canine mom’s unplanned pregnancy" and is "still pretty special," reported the Roanoke Times. He not only brought attention to the group, but also found himself a permanent home.)

And the Great Dane who started it all -- now named Serendipity -- works with kids with special needs, at least when she's not napping in dog beds that are much too small.

"The kids just light up. They see that the dog is able to overcome what's different about them and it makes them no less of a dog and they're able to connect with them on that level," Proctor told a local CBS affiliate.

Green Dogs Unleashed's name comes from "the concept of recycling," said Proctor, who wants people to "think twice" before getting rid of a deaf, blind dog.

"These are mostly animals which communities around the country have thrown away like garbage. The majority are shelter dogs, that would otherwise be deemed unadoptable and euthanized," she said. "We rescue these precious creatures from shelters, rehabilitate and train them, using their special needs as a gift, not a burden."

And they've also put up a new photo of Serendipity being awesomely adorable:

We always want to hear about people doing great work with animals -- get in touch at arin.greenwood@huffingtonpost.com

Animal Rescue Views Blind, Deaf Dogs 'As A Gift, Not A Burden' (UPDATED)
The Story Of Eve And Dillon 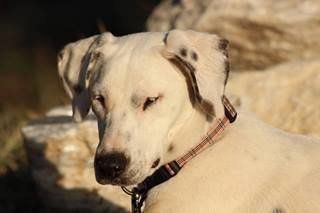