The environmental blog Grist has poked fun at some defenseless departing Bush 43 officials by comparing them to Simpson characters. 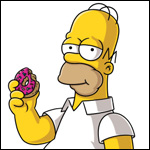 It's fun during a political transition and a tradition to give the guys on the way out a kick in the pants. The UK-based environmental blog edie couldn't resist saying goodbye to Bush 43 as the "Toxic Texan".

But it's a lot smarter to stop campaigning and start building bridges. Smarter to recognize what the old guys did right. The new guys may need the same goodwill when some day they are on the way out. President Obama made crystal clear in his inaugural address the main points of his differences with Bush 43. But he has been focusing on the job to be done and has avoided personal attacks on his predecessor.

In that spirit, why not recognize that Bush 43 left some important environmental legacies? Grist, in a fit of commendable bipartisanship, invited Jim DiPeso, Vice President for Policy and Communications of Republicans for Environmental Protection, to pick out the highlights of George 43's contributions to the country's environmental heritage. It was posted on January 16, with the title Oceans 43. Here's an abbreviated summary:
Legacy 1. Huge New Marine and Land Preserves. Bush 43 vastly expanded the number of acres of federally protected marine and land preserves. He established

three marine monuments that protect some 125 million acres of habitat, history, and beauty in America's Pacific territorial waters. The Marianas Trench, Pacific Remote Islands, and Rose Atoll marine national monuments are a treasure of coral reefs, whales, sea turtles, dozens of bird species, hundreds of varieties of fish, the deepest spot one can go without burrowing into the planetary crush, and weird thermal formations that support the toughest life forms on Earth. Bush's action was the most sweeping use ever of the [1906] Antiquities Act. Combined with the Papahanaumokuakea Marine National Monument, which Bush designated in 2006, his marine preserves equal in size the combined extent of all national parks, national wildlife refuges, and the National Landscape Conservation System, plus 9 million acres in change. Bush 43 also added nearly 2.5 million more acres to the National Wilderness Preservation System.

tougher fuel and engine standards. The sooty gunk that shoots out of exhaust pipes from bulldozers and other non-road vehicles is bad news for hearts and lungs in cities across America. The standards, adopted in 2004, are expected to prevent 12,000 premature deaths.

by 10 years the Montreal Protocol's phase-out of hydrochlorofluorocarbons (HCFCs), a refrigerant with a heat-trapping potential hundreds of times more powerful than carbon dioxide [reducing U.S.] greenhouse-gas emissions up to 16 billion metric tons of CO2 equivalent, more than two years' worth.

Republican though he may be, DiPeso ends by recognizing Bush 43's biggest environmental failure. The moment of national clarity right after 9/11 created an opportunity for reform as well as for revenge:

Bush had an opportunity to give U.S. energy policy a hard corrective turn. At last, the dangers of oil dependence had broken through the fog of political inertia and narrow agendas. Had Bush seized that moment, he could have begun shifting the American energy economy away from oil, away from conventional fossil fuels, away from waste, and toward safer, cleaner, more efficient energy choices. For a Texas oilman to do that would have been a Nixon-going-to-China gambit. But the moment passed. Nearly seven years were lost. Only when gasoline prices had reached painful levels [did Bush] put his name on overdue legislation strengthening motor vehicle fuel economy standards.

One week after DiPeso's post, the six comments on the post pondered mostly whether or not CO2 emissions add to the greenhouse effect. DiPeso's post is worthy of wider distribution.