Not so very far from yesterday's bombing that killed 16 police officers, in a region subject to a recent Chinese crackdown to protect the Olympics, Martin Ma manages a program to improve the workplace conditions of Xinjiang cotton farmers. He is simultaneously seeking to remedy the environmental problems of pesticide and the deep poverty of the farm workers. He works for Social Accountability International (SAI) in New York City under a four-year grant from the Netherlands development agency Solidaridad, which tries out new ways to lift people out of poverty and danger wherever they live or work.

For Solidaridad, the project is designed to improve the social and environmental standards of the supply chain for cotton to the Netherlands. It is pushing and helping Xinjiang smallholder farmers to form a cooperative, and pushing and helping a large farm to go organic to reduce chemical dangers to workers. The idea is that some day the farms will meet organic standards and be certified by the Dutch certification body SKAL, and meanwhile conditions for workers will improve.

The project is focused on a big farm with 50 farm workers in one village and on two neighboring villages with 1,250 residents of which 417 are local small farmers. The communities are Aksu, Kuqa and Korla, indicated by red dots on the map below, on the northern edge of the Taklamakan Desert in Western China. The project will work with the smaller farms as part of a long-term plan to allow expansion of production. Many workers migrate from Urumqi to the northeast, in East Turkistan (just east of the border with Russian Turkistan, which describes the five Turkic republics that were part of the former Soviet Union and are now independent), which the Chinese call Xinjiang or "New Frontier." 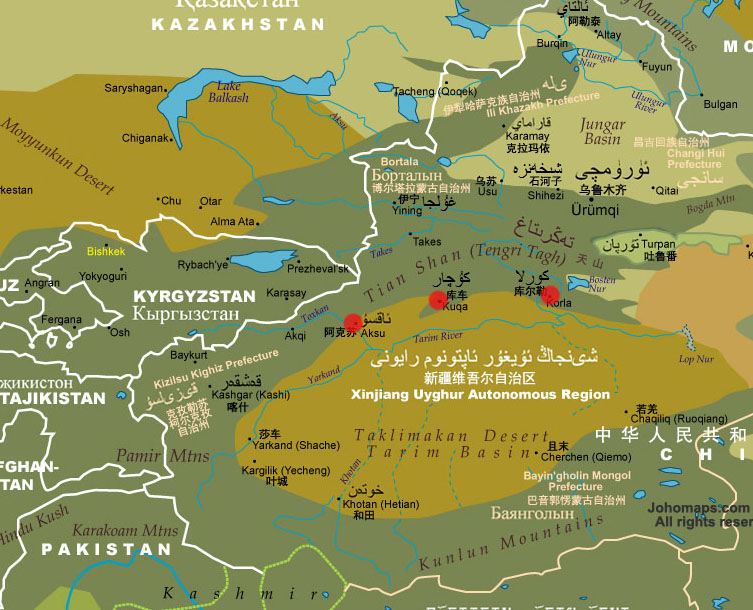 The area includes many migrant farm workers, and most of these are indigenous Turkic-speaking Muslims known as the Uighurs (pronounced Weegers), who remained behind after the many centuries of migrations of Turkic peoples toward the west. In addition, the area has some Yi people who have migrated from North Vietnam via train with the help of agents who are paid by the farm-owners and who bring the migrant workers in SUVs and trucks.

A farm owner was initially reluctant to sign up for the program, but was reassured when the contribution to the project of the funding sources was explained. The farm owner is an entrepreneur who saw the potential cost to himself of the project and was skeptical that the value to him of the project would exceed its costs. Then two farm workers on the next farm were killed by a tractor. This event shocked the farm owner into a greater appreciation of the dangers his own workers could be facing, and he signed up.

The August 4 Bombing. Kashgar, the westernmost city in China where 16 Chinese border police were killed yesterday, is southwest of the three sites where Solidaridad and SAI have their project to assist local farmers (see map). The two attackers were linked to the East Turkistan Islamic Movement (ETIM), a coalition (if it really exists -- some scholars question this) of Uighur advocacy groups that China calls terrorists. The United States reported in 2002 that al Qaeda was targeting the Uighurs and the London Times reports today that the Sunni group Hizb ut-Tahrir is doing the same.

The attack was not a total surprise. Last month, three people were executed in a town near Kashgar after being convicted of being ETIM members. A day earlier, five Uighurs died after a police raid on a middle-class home in Urumqi. Chinese officials have said that some local groups are tied to foreign Islamist extremists that are training Uighurs to bomb. The Public Security Bureau announced in April that it had arrested 45 people in two Uighur terrorist cells allegedly tied to the ETIM and plotting to disrupt hotels during the Olympics, for a total of 82 persons arrested as terrorists in Xinjiang through June. However, the province's vice-governor said last week there were "only a small number" of violent incidents in the region.

Human rights groups and some academics say the Chinese government exaggerates the threat to justify local crackdown and fails to distinguish among extremists, proponents of Turkic independence and advocates of Islamic culture. The Chinese Government forbids public display of the Uighur language or faith and Uighur defenders argue that violent incidents in Kashgar and elsewhere result from personal conflicts or security crackdowns, not terrorism. Prof. John Wang at California State University at Long Beach says the ETIM was much more active in 1993-1997 and since 2001 has retreated to Afghanistan and other places outside China. But the Olympic Games might have drawn them back.

Improving Uighur Productivity. The Uighurs are China's fifth-largest ethnic minority, with 8 million people concentrated in Xinjiang Province. Many of the Uighurs are unhappy over the growing migration to the area of Han Chinese ands their powerful and growing domination of business and local government in Xinjiang, a province that is described as "autonomous", implying that it is ruled by its own people. Han residents respond that Uighurs are not yet capable of managing the regional economy or administration.

The Uighurs are certainly poor. The 1,300 Uighurs who depend for their incomes on the farms in this project earn an annual income at current rates of exchange of $150. The official Chinese poverty line is $100 a year, which would imply 20 million poor Chinese people. If the line were raised to the $1 a day level used by the U.N., or $365 a year, the estimate for the number of poor people would rise to 140 million, more than 10 percent of the Chinese population. Either way, the Uighur farm workers live on very little.

The goal that Martin Ma (shown in front of SAI headquarters in New York City) is seeking to implement is to improve workplace conditions, productivity and pay of the Uighurs on selected farms in the area and also to ensure the organic quality of their cotton products. The brands that buy cotton from the area are willing to pay for conversion of the cotton crops to organic production, with Solidaridad covering some of the cost of conversion. For the organic component, the project has hired someone with 15 years' experience growing cotton used in natural-color textiles. 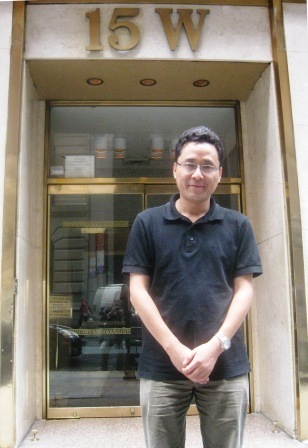 Protected Cotton. Cotton is protected by the Chinese government. In fact negotiations started in 2001 at the World Trade Organization on a new trade liberalization round have just collapsed in part because China did not want to give up its protection for agricultural goods. (See "The Doha Round... and Round... and Round," The Economist, July 31, 2008.) Agricultural trade accounts for only 8 percent of world merchandise trade but is the most heavily distorted by tariffs and subsidies. The 1994 Uruguay round required countries to convert their quotas and other barriers into straightforward tariffs, but countries were allowed to impose "special safeguard" duties to protect themselves. These duties have been relied on to protect politically sensitive commodities. China has decided that the best response to high food prices was to protect its own farmers.

Because Chinese cotton is protected, it needs to sell overseas as a premium product, which adds to the importance of certification according to organic and decent workplace standards. The project provides technical assistance for conversion to organic production, workplace certification and ethical trading. It also offers the farmers a market analysis. In the meantime the project is seeking to show the workers that it can deliver for them by working immediately on compliance with decent workplace standards. It is obtaining social insurance for farm workers and is making basic improvements such as installing running water and toilets, and providing daycare assistance for women who would otherwise bring their infant children to work with them in the fields.

Solidaridad's Role. Solidaridad is behind it all. Its approach is to use global market forces (for example, the influence of brands over their suppliers) as leverage for ambitious social change projects in developing nations, spending time organizing buyers in Europe and relying on existing well-known social and environmental standards like SA8000 and Fair Trade as evidence of compliance by farms overseas. It focuses on the product quality and therefore seeks to organize small farmers into cooperatives for mutual support. Sometimes Solidaridad creates its own brands, such as Oke fruits and Kuyichi jeans, and then makes these businesses independently. It also stresses farm ownership -- for example, both AgroFair and Kuyichi are partly owned by farmers in Latin America and Africa.

The fair-trade component is a hallmark of Solidaridad's programs. A director of Solidaridad, Nico Roozen, is a Dutch economist who with Frans van der Hoff was a key figure in launching Max Havelaar, the first ethical trading certification. Roozen helped convince major Dutch retailers to offer fairtrade-labeled goods, which contributed to the commercial success of fair-trade certification. He is also a member of the SAI Advisory Board.

Solidaridad has been represented in China by Jeroen Douglas, who previously worked on fair-trade bananas (branded as Oke) in Honduras and Nicaragua. He made a trip to Chinese farms to survey their social conditions in 2005 and the following year Solidaridad invited SAI to co-manage its program in China. Under the Made-By name, Solidaridad is seeking to create a flagship fashion chain in China embracing its three themes -- ecological cotton, fair-trade and responsible workplaces.

Edwin Koster works with Douglas as Solidaridad's manager for the textile and fashion sector and is an alternate member of the SAI Advisory Board. His responsibility is, in collaboration with Made-By, to develop sustainable fashion chains that can benefit the environment, farmers and workers, and has visited China to move the project along.

By addressing in the same location both extreme poverty and acute environmental stress, this project can demonstrate how to create a decent workplace. Doing this will improve life for hundreds of families, and give their children some hope of a better future. Is it too much to think, that this project will also help reduce causes of conflict and reduce the ability of terrorists to recruit new members?

Full disclosure: John Tepper Marlin has been married for nearly 37 years to Alice Tepper Marlin, who is the President of SAI.