Tim Sanders visited with me in New York today on a tour to promote his new book, Saving the World at Work: What Companies and Individuals Can Do to Go Beyond Making a Profit to Making a Difference. Just published by Doubleday, it argues that companies have no choice these days but to become greener - more responsive to the health and other needs of their workers, their communities and the planet. Tim good-naturedly fielded my questions for nearly an hour. 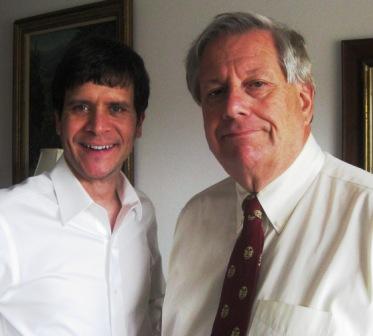 Q1. Your previous book [Love Is the Killer App] was about sharing your knowledge, network and compassion in the workplace. How did you go about moving from that topic to Saving the World at Work? How long did it take you? SANDERS: My first move was to get together a staff of eight MBA students at Stanford to do the basic research. I thought I could finish the book in six months. It took me three years.

Q3. All of a sudden? The Nike and Gap demonstrations go back to the 1990s, and Shopping for a Better World sold a million copies until the first Gulf War preempted public attention. And there was a CSR wave coming out of the civil rights movement and the Vietnam War. SANDERS: Certainly, going back to 1975 or even before, CSR was talked about. But it was a relatively small high-income group. The Responsibility Revolution is reaching a much larger share of consumers and workers. Starting in 2000 or 2001 the Cone surveys show an increase in the share of people willing to switch to companies that are shown to be doing more for their workers or the environment. The inflection point is 2002, after Enron and WorldCom and then Katrina, and Al Gore's Inconvenient Truth. Two-thirds of Americans say they are willing to switch brands based on a responsibility difference. There is a growing market for organic and fair trade products.

Q4. CSR has been a luxury good because the organic or sweatshop-free claims are made to require a premium from the consumer. You are saying the co-branding premium value of a CSR brand is rising. How much would you say the premium has risen since 2002? SANDERS: Based on the surveys, I would say it has doubled.

Q5. How do you think this revolution got under way? Why now? SANDERS: Professor Robert Putnam at the Harvard Business School talks about "multiple teachable moments" and 9/11 is one of them. CSR previously had a bad rep because it was associated with do-gooders. What happened is that CSR came to be seen as something that affects all of us. We came to a realization that we are all part of a web.

Q6. Are there any risks? Is this a sustainable revolution? SANDERS: To be sustainable, we have to be on the lookout for greenwash, or phony responsibility. So companies will need to find ways to hold themselves responsible and show to consumers that they are walking the talk. SANDERS: Yes.

Q7. How did this revolution get started? You cite Aveda and Patagonia and SAS Institute as innovators. But these are small companies - how did this become a movement? What is your model of how change happens? SANDERS: Innovators go first because they want the world to conform to their idea of what is right. It is hard for them. Patagonia almost went out of business. Aveda couldn't meet payroll. Ray Anderson nearly got fired from Interface. Yahoo - and this isn't in my book - intended to be this kind of innovative, responsible company but the responsibility part wasn't built into the structure.

Q8. You are full of admiration for Google. SANDERS:Yes. Larry Page and Sergey Brin got it right. Change happens by building it into the system. Google built responsibility into its corporate structure. If you get involved in the community, you are more likely to be promoted at Google. Brin had Human Resources questions and he went to Patagonia.and SAS Institute to get them answered. They needed to figure it out.

Q9. That's very Japanese, finding out what other people have done before one plunges ahead. It's un-American. SANDERS: Yes it is. And it works. For example, one outcome is the one-percent solution. Some companies have decided to give 1% of gross or 10% of profits to charitable purposes because other companies pioneered with the idea. Wal-Mart picked up a lot of its innovations from smaller companies. It got its ideas for fleet reduction from Green Mountain Coffee Roasters. It also learned from Interface's waste-reduction plan and its imitation by other carpet companies.

Q10. Do you think it is easier or harder to be responsible if you are a public company? You say in your book that shareholders are mostly "nearsighted". SANDERS: It's much harder to be responsible when shareholders are nearsighted. And it's worse than that. Most people who hold stocks are gamblers. Timberland is under pressure from its competition, and shareholders have been asking why workers are allowed to take off a week every year for community service. Yet this employee benefit is the #2 source of job satisfaction at Timberland. Training is #1.

Q11. How does what you recommend in relation to company treatment of people and the planet differ from just being good business? SANDERS: If a company does this just to make more money it is not sustainable. It will be phased out, and workers and communities and consumers will be angry because the company is going back on a promise. People won't stand for it.

Q12. Last question - Have you run across any interesting nonprofit organizations - social entrepreneurs - during the writing of your book? SANDERS: Yes. City Year was critical to Timberland's success - it brings Timberland workers into projects in cities. Marriott works with a community organization in Brazil, the Juma Preserve Amazonians. Marriott has pledged 5% of the income from every hotel room for the next two years to educate the people to be activists and managers instead of laborers. This tribe will inoculate other tribes against clearcutting. Century 21's CEO, Tom Kuntz, even though the company is in crisis, is increasing its contribution to Easter Seals at the same time as it is trying to change the way Easter Seals does business. Century 21 learned this from Jeff Skoll, who requires the nonprofits he supports to be business-like. Another example is Consorta, which buys for Catholic hospitals. They donate top talent to United Way and teach them how to buy, saving $7 million in the first year.

Tim, thank you so much for coming by. I hope your book is a big success.

THE GREEN EDGE Every generation must make sacrifices to ensure the planet is delivered safely to the next and future generations. We Americans today must change our behavior to reduce the negative effects of our consumption - dependence on foreign oil, impairment of land, water and air, and effects on workers and the community. The Green Edge looks at what, why and how we must change. (Logo by Pat Cottingham/Genuine Imprints, Ltd.)