He may be unmarried, but count DC Entertainment's Alan Scott as the latest addition to the growing pantheon of gay superheroes. Formally known as the Green Lantern of DC's parallel universe, Earth-Two (take a hike, Hal Jordan), Scott will shine his light as the leader of Earth-Two's premier super-squad, the Justice Society.

Unlike most modern gay superheroes, Scott has had a long history with DC Comics -- like, a 72-year type of history. Though married with children, Scott's character was no stranger to LGBT issues. His son, the heroic Obsidian, was gay. Scott accepted and supported his son's orientation, making him the superhero dad of the year. But, continuity-wise, none of that counts anymore. When DC revamped its entire line of heroes with the "New 52" relaunch last September, Alan, his son, and their long history with the DC Universe simply vanished.

When DC reintroduced Scott last month as the CEO of a giant media corporation in Earth-Two #1, people were more curious about his new costume than about his sexuality -- that is, until DC Entertainment's co-publisher Dan Didio slipped the news on May 20 that they would reintroduce a previously straight and iconic DC hero as one of their "most prominent gay characters." Cue the sound of thunder as the Internet split in half. Rumors ran more wildly than the Hulk with a bad hair day, with fingers pointed at Superman or Batman. (Batman writer Scott Snyder joked on Twitter that Bruce Wayne was "Gothamsexual," as Batman only has time for the city he protects.) Of course, unverified rumors leaked that Scott was indeed the character in question, and, well, here we are.

But for every great superhero, there's a great writer behind them. Enter Eisner-Award-winning comic veteran James Robinson. With a writing résumé including multiple stabs at Alan Scott and the Justice Society, Robinson has also made headlines for revealing another DC character, Starman, to be gay. Read on as Robinson addresses how Alan Scott became gay, Scott's redefined role in Earth-Two, and the state of diversity in comics.

What was the process behind making Alan Scott gay? What was the discussion between you and editorial?

In Alan's prior version, he had been an old man with a gay son [Obsidian]. And removing that character from the DC Universe bothered me -- the fact that we were taking a gay character out of circulation. And it occurred to me: Why not just make Alan Scott gay? He's still interesting, he's still a dynamic hero, a great man, but he happens to be gay. So I suggested that to Dan, and to his credit, there wasn't a moment's hesitation. He was like, "Yeah, sure, that sounds great." So there wasn't a huge editorial think tank; it was just an idea that got put forward and was accepted.

You've written Alan Scott before in other Justice Society titles, though as straight. Is there any difference in how you've written the character now that he's gay?

No. He's attracted to men, and that's the only difference. He's going to be the leader of the team; he's this dynamic hero, this type-A personality. In his private life, he's this giant of the media industry. He is someone that you trust and believe in. He's willing to die for the planet; he's willing to die for the people of the world. He just also happens to be gay. I'm trying to make it one part of his personality, as opposed to it being the one identifying factor of him as a man.

How will other characters in Earth-Two, and even Alan himself, address his orientation?

Alan is already out when we realize he's out in issue 2. There isn't a coming-out moment. And I see that Alan Scott is a dynamic, type-A personality. At some point in his past, he realized that he was gay, so he said, "OK, I'm gay." He accepted it and moved on with his life. He just lived it, you know? So as we'll learn, Alan Scott is out. He has nothing to hide. He's proud of who he is. By and large, the world has accepted him as that. And his teammates will accept him as that.

Are there any plans for his romantic life? Should we expect boyfriends or partners down the line?

He's a tall, handsome, blond guy. He's definitely going to have some romance in the future, but I'm concentrating on setting up the character and setting up the world for the first story arc. So that's something that will unfold as we get more into his private life in the future.

What would your response be for more conservative readers who might not fully embrace this change?

I can't worry too much about that. I have to look at the world and what's the right thing to do, and what the right characters should be in these comic books. People that tend to be a little more hesitant to have these characters in comics need to just move with the times and realize that it's a diverse world and there are brave, gallant, interesting people who happen to be gay. They should just get to know them and realize that we all just have to get on with life and stop hating each other.

Pulling back and looking more at the comics industry as a whole, how do you think comics have developed in diversifying the character base, and not even just in terms of orientation but race, nationality, and religion?

Well, I think that comics are trying to do that, especially, I think, with DC, Marvel, and Archie. People are aware that the world is more diverse, that all heroes aren't white Anglo-Saxons. There's diversity in life, and there's diversity in the types of heroes we have. If you look at the brave men and women coming back from serving abroad in the armed forces, there are lots of different colors and religions and sexual orientations. So I think that comics are reflecting that more and more. But I should point out that for me, personally, what I believe was the first gay kiss in comics, I did that in 1998 in Starman [#45]. So I've been trying to do this for a while, and I think I've been pretty successful.

That's an interesting question. I think the main difference is that Alan Scott is this heroic, dynamic man. He will be very much the leader of the Justice Society, and a figurehead. Often, I think, gay characters, with the exception of Batwoman, are part of a team but are often aside, somewhat. Alan's going to be at the forefront of this team, leading it, being someone that is loved and admired by the people of Earth-Two. So that's a subtle difference that I will be adding, trying to not just present a positive gay role model but someone that is a type-A superhero.

And beyond Alan's orientation, are there any other changes to the character?

The way he gets his powers and what they derive from will be different. He has a power ring, but he is literally the storehouse for the energy of the Earth. So he is literally the Green Lantern of Earth-Two. There isn't a physical lantern; he is the lantern. That makes him a powerhouse on Earth-Two on the level with Superman, so there's that element to him, as well.

Fantastic. Is there anything else that you wanted to mention?

I just wanted to say that I appreciate the interest, and I hope that people enjoy this book and support him and want to see where the adventures of Alan Scott and the rest of the team in Earth-Two go in the future.

See photos of Green Lantern and his boyfriend, as well as 14 other LGBT comic-book heroes, in the slideshow below: 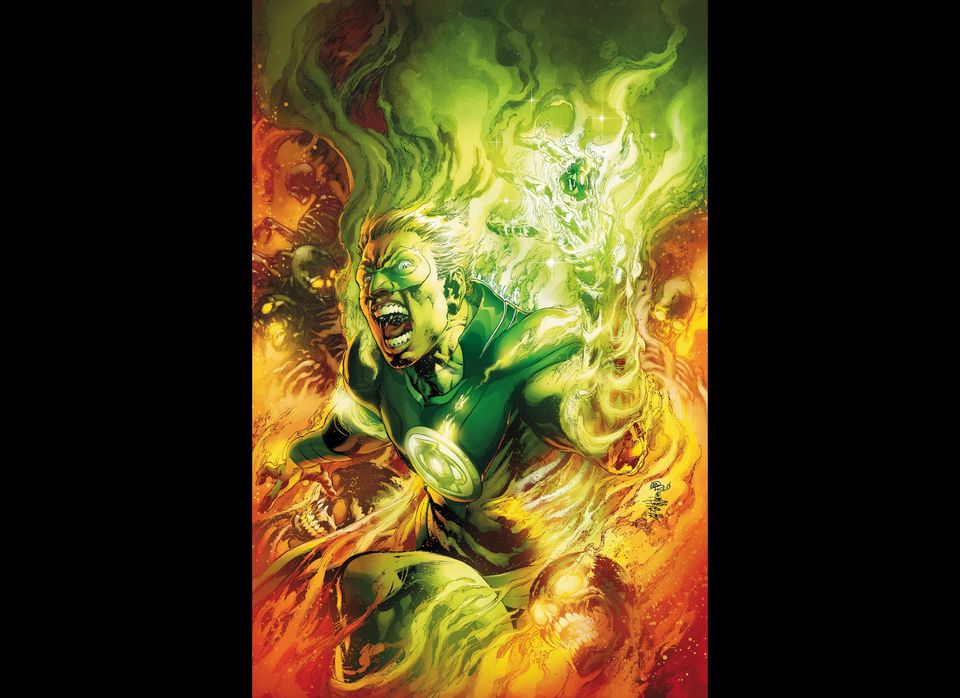