By David Bloomgarden and Arantza Loza

David Bloomgarden is acting chief of the Multilateral Investment Fund's Access to Basic Services and Green Growth Unit and leads its public-private partnerships program. Previously, David was deputy director of the Office of Multilateral Development Banks in the U.S. Treasury Department.

Silvia Fernández, a young widow, was not interested at first in a new energy-efficient refrigerator for her business, a bodega on a busy street of a poor neighborhood in Guadalajara, Mexico. She didn't know what energy efficiency meant, but when she was told it would lower her electricity bill, she changed her mind. She worked with Financiera Te Creemos, a microfinance institution in Mexico that financed the purchase of the new refrigerator. In only four months, her electricity bill was halved, and--to Te Creemos and Silvia's surprise--her revenues increased. That's because Silvia could now refrigerate the products that yielded her a bigger profit margin, and not those required by the drink distributor that provided the old machine for free. The energy-efficiency financing had a positive effect not only on the environment, but also on the competitiveness of Silvia's small business. 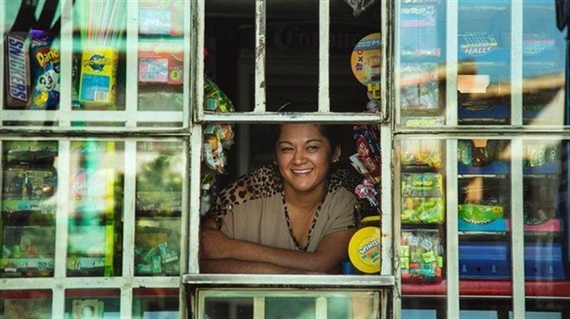 In another example of the relationship between microfinance and the environment, the latest headaches of rural microfinance clients have been caused by the effects of climate change. Droughts, floods, and other extreme climate events are shrinking or even eliminating the revenues of smallholder farmers. Dairy farmers in Patacamaya, in the Bolivian Altiplano, told us they are very concerned about the weather phenomenon el Niño because, "they say it is going to be worse than in the past." The farmers worry that the resulting water scarcity will ruin the alfalfa they need to feed their cows. The cows will most likely produce less milk, and eventually could die, forcing the farmers to either migrate to the capital city of La Paz or look for another form of livelihood. Microfinance institutions in the Andean region are financing a set of adaptation measures to increase the resilience of these smallholder farmers, such as windbreaks, drainage systems, and silvopastoral systems.

Green microfinance responds to the different challenges and opportunities presented by increasing pressure on the environment. Furthermore, the multidimensional purpose of green microfinance--economic development, social inclusion, and environmental sustainability--is a way for microfinance institutions to achieve the so-called triple bottom line.

Microfinance institutions around the world are creating stories like those of Silvia and the dairy farmers, with the help of initiatives such as the United Nations Environment Progamme's Microfinance for Ecosystem-based-Adaptation to Climate Change (MEbA), the United Nations Capital Development Fund's CleanStart, the Multilateral Investment Fund and Nordic Development Fund's EcoMicro, and Grameen Shatki. The microfinance institutions are not all working in the same way. Some may choose not to finance certain activities. Others may develop environmental policies, or take a step further to join industry-led initiatives to promote green policies and practices, like Protocolo Verde in Colombia. Others may see a market opportunity in developing new financial products and services--and still others may choose to do all of the above.

The interest in green microfinance is clearly growing. It is frequently discussed at international conferences like Foromic in Latin America or African Microfinance Week, it is featured in special issues of academic journals like Enterprise Development and Microfinance, and was a topic at the United Nations Climate Change Conference, or COP20, in December 2014. Green microfinance has undeniably become a very trendy field where terminology, definitions, and indicators are in the process of being developed and tested. There are many different views on what it is and what it can accomplish, and there is a risk of overestimating the miracle of microfinance--in this case, of green microfinance--so efforts to assess its performance are necessary, such as one recently conducted by MIX.

However, the momentum for green finance is building globally. From the United Nation's Sustainable Development Goals, to the climate agreement reached at COP 21 last month, it is evident that there is widespread concern about climate change and demand for a more sustainable way of conducting business. We believe that green microfinance is one of the tools in the toolbox for sustainable business and climate action.