The Netherlands Take the LEED and reap the benefits of a healthier population and economy.

Green
When you enter the first platinum LEED rated building in Europe* -- the new TNT Centre located in Hoofddorp, The Netherlands -- you are immediately struck with just how simple it is to reduce energy consumption. You push the revolving door to enter. At the heart of the interior is a staircase. There is no sign of an elevator (although they do, of course, exist). 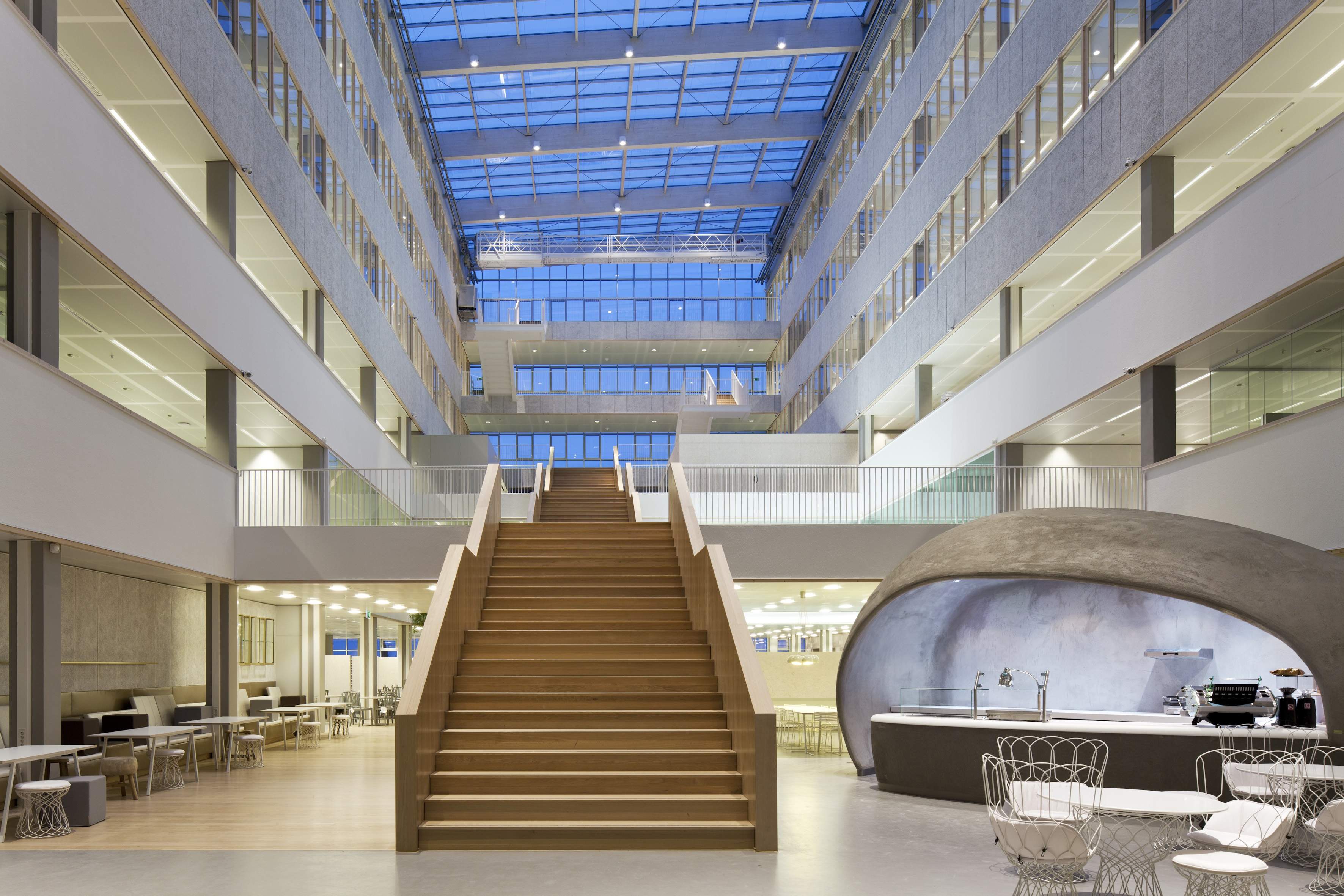 Photo: The interior of the TNT Centre in Hoofddorp, The Netherlands.

At the head of the building is a glass roof, which emanates natural light far more efficiently than light bulbs ever could. The TNT corporate headquarters is powered, to a very large degree, by an impressive design, which includes a subtle push for people to make better choices. Energy is provided by a few solar panels and a biofuel energy system that produces more than enough to power three neighboring buildings as well.

The Rotterdam-based entrepreneurs who built the TNT headquarters building, OVG real estate developers, are in high demand worldwide. At the Clinton Global Initiative, former President Clinton challenged OVG to be a part of President Obama's $4 billion commitment to create green jobs in the beleaguered construction industry, by providing much needed energy upgrades of federal and private sector buildings. And the United States is not the only country calling. According to Cees J. van der Spek, OVG's sustainability director, eight other countries, including BRIC (Brazil, Russian, India and China) have also contacted OVG. The company has more demand than they can keep up with.

Political Will
OVG is taking the lead (and LEED) in the private sector and reaping the rewards, but if you visit the Netherlands, it's easy to see that the Dutch green culture has been cultivated with smart public policy. Most of the locals in Amsterdam get around on bikes; half of residents use their bike daily and 85 percent are riding at least once a week, according to Ria Hilhorst, Amsterdam's cycling official. Trains, buses and trams are available everywhere throughout the Netherlands. And if you choose to own a car, you are taxed on the weight of it, incentivizing owners to go for smaller, more fuel-efficient vehicles.

The governments in Germany and Denmark succeeded in making bicycling safe and attractive, as well. Could bicycling (as an alternative to gas-guzzling cars) underpin one reason why these countries are doing so much better economically than the U.S. and other European countries, particularly PIIGS (Portugal, Ireland, Italy, Greece and Spain)?

Pedal-power policy has created a strong, healthy (physically and fiscally) culture that has put the Netherlands, Denmark and Germany at the top of the developed world in providing efficient social systems at far lower costs than the U.S., as I outline in greater detail directly below. This is particularly visible in one of the largest drains of GDP in the U.S. -- health care.

Physical Health
Riding a bike pays off dramatically in physical health. There are far lower rates of obesity in nations whose citizens pedal their bikes to work, than there is a nation where people spend hours each day in cars and in front of computers. Obesity is an epidemic in the U.S., where 34 percent of Americans are obese. As Mike Milken, the chairman of the Milken Institute, an economic think tank, says, "If everyone in America lost weight and returned to the same weight levels of 1991, we would save one trillion dollars. We would cover all the uninsured, and we would be able to quadruple the money for medical research."

Good food is another pride of the Dutch. Restaurants, like de Apotheek wine salon (in the Hotel Pulitzer in Amsterdam), pride themselves on serving only wine and food that have been grown using sustainable farming techniques that will preserve the soil and seeds for centuries to come. Of course, there are American fast food restaurants in Dutch cities, mostly for the American tourists; however, the locals love their organic produce and lean, wild game. (Deer is very popular.)

Fiscal Health
Good health dramatically reduces the costs of health care. In the Netherlands, a country where most citizens have health insurance, health expenditures are 10.8 percent of GDP, compared to 16.2 percent in the U.S. Denmark's health to GDP is an impressive 7 percent, and Germany's is 8.1 percent. And the U.S. has a higher infant mortality rate than the Netherlands, Denmark and Germany (6.06 deaths/1,000 live births compared to 4.59 in the Netherlands), more than two and a half times as many women dying in childbirth (24 deaths/100,000 live births compared to 9) and a lower life expectancy (78.37 in the U.S., 80 in the Netherlands), according to CIA.gov's World Fact Book.

Peace
The United States also spends almost three times as much on our military, by GDP, than the Netherlands, Denmark and Germany, at 4.06 percent, 1.6 percent, 1.3 percent and 1.5 percent respectively. With two wars in the Middle East, one could easily make a case that our oil addition, which costs the U.S. $8 billion or more in OPEC deficit each quarter, is the primary reason we've become such a warring, indebted nation. We pay a high price in health, defense spending, soldier's lives and GDP growth stagnation to feed our oil addiction.

Amsterdam is a peaceful city, famous for its "live and let live" attitudes (legalized prostitution and drugs), both now and historically. In the 1600s, if you wished to escape religious persecution and try your hand in America, the Dutch were great seamen, who frequently shuttled Europeans over to New Amsterdam (and profited from the slave trade as well). In 1969, John Lennon and Yoko Ono staged their famous honeymoon Peace Bed-In at the Amsterdam Hilton. Visitors today can stay in the same suite, which has been preserved, with Yoko's input, and includes Lennon lithographs, peace memorabilia and other artwork symbolizing the spirit of the event and time.

There is much to be learned from the Dutch, who have found a way, through public and private partnerships, cultural indoctrination and political will to make green peace a part of daily life. They are reaping the physical/fiscal benefits at a time when the world needs bold, effective solutions.

If you are interested in visiting The Netherlands, be sure to watch out for my travel article, which will be published in January 2012, and includes important travel tips and the best restaurants and landmarks in Amsterdam.

*According to the U.S. Green Building Council, the TNT Centre was the first building in Europe to be listed platinum LEED in its directory.

Photo provided by OVG with permission.