Imagine if every neighborhood in every city in America had a safe, vibrant and accessible outdoor place that served as a neighborhood hub. A place where kids could play and participate in sports; where neighbors could get together for a shared meal or a musical performance; where teachers could conduct lessons in science, poetry or art under a canopy of trees; where kids could plant a garden, tend crops and harvest a little healthy food for themselves.

Most city neighborhoods already have a local schoolyard, and it's the perfect space to be transformed into an outdoor hub -- serving students during the school day and the entire community when school isn't in session.

Multi-purpose, environmentally beneficial schoolyards like these are called "green schoolyards," and they're becoming a reality in cities across the country.

The green schoolyard movement owes much to chef Alice Waters' Edible Schoolyard project, which began 20 years ago in Berkeley, California, in response to a neglected schoolyard of crumbling asphalt. In Boston, the Boston Schoolyard Initiative revitalized 88 schoolyards between 1995 and 2013. And in San Francisco, Education Outside is creating an extensive network of green schoolyards. Green schoolyards are part of a broad movement to connect kids and families to nature in their everyday lives, lead by a coalition called the Children & Nature Network.

Schools and communities have been overwhelmingly receptive to green schoolyards. The challenge has been securing funding for design and construction, as well as resources for ongoing maintenance. Education Outside continues with a mix of public and private funding, along with help from a spirited corps of young people who serve as dedicated stewards of the schoolyards.

Space to Grow receives funding from the W.K. Kellogg Foundation and other private sources, as well as public education dollars, but the key to its success is public water district funding, which has been directed toward the green schoolyards because they address stormwater control.

To be selected for a Space to Grow schoolyard, a school has to be located in one of Chicago's many flood-prone areas. Each Space to Grow schoolyard replaces asphalt paving with water-permeable groundcovers and play surfaces, as well as landscape features that absorb rainwater, reducing runoff that causes local flooding and flushes street pollutants into the Chicago and Calumet rivers and Lake Michigan.

Though it benefits from federal, state and city funding, Space to Grow isn't a government project but a local initiative that engages the entire school community -- including neighborhood residents -- to help plan and create a schoolyard that serves many needs.

The first of the Space to Grow opening ceremonies, at Morrill Math & Science Elementary School, offered ample evidence of a shared community effort: hundreds of volunteers showed up early to complete the landscape planting; neighbors mingled with teachers and city alders; kids struck up soccer and basketball games even before the ribbon was cut.

"It's a big win for the kids and for the city," said Rochelle Davis, HSC president and CEO, who was on hand for the festivities along with other Space to Grow partners.

Space to Grow has not gone unnoticed. Last month, Davis was in Washington, D.C., to accept one of three Champions Awards from the National Physical Activity Plan Alliance. Next month, Space to Grow will receive the Illinois Association of Floodplain and Stormwater Management's Sustainability Award. They have also been nominated for an Emerald Award from the U.S. Green Building Council's Illinois Chapter.

With initiatives like Space to Grow to serve as models, we should envision greening every schoolyard in the country. And the real winners, of course, will be the kids. 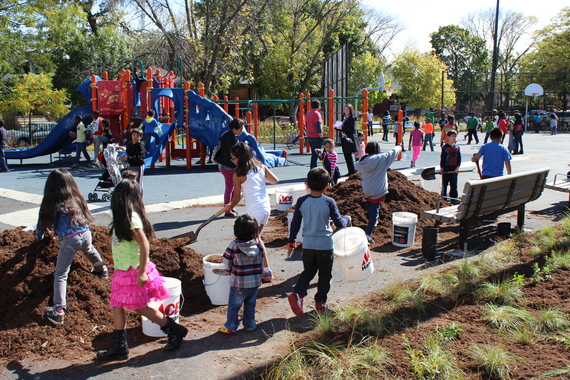