Hangar 25 is the first LEED Platinum certified aviation facility in the world.

Shangri-La Construction has built the world's most sustainable aircraft hangar in Burbank, California. Hangar 25 was built for the same cost as a traditional hangar and that's even before factoring in the Federal Investment Tax Credit for renewables the building qualifies for with its solar panel installation. The sustainable design reduces the hangar's operational costs by significantly reducing its energy use and maintenance costs.

"Green building should be the only kind of building," said Mayor Villaraigosa. "This LEED Platinum certified jet hangar is a model for the city, the nation and the world." 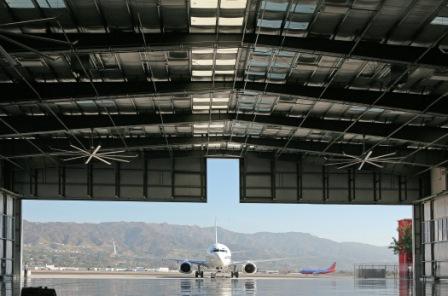 The hangar features a solar-powered electric plug-in jet system, 1530 solar panels installed on the roof producing 110% of Hangar 25's power needs and so feeds back into the energy grid providing its neighbors with energy. The hangar's electric plug-in system allows for the jets, when idling or during maintenance, to draw from the hangar's electric power which gets its energy from the rooftop solar panels. 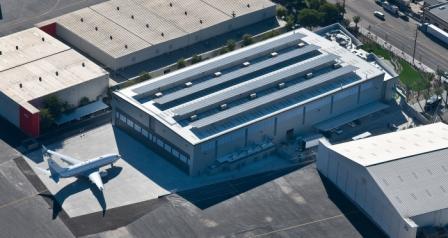 Additional features are sustainable landscaping, electric vehicles, a potable water and chemical-free fire system which protects the jets from chemical damage in case of fire, natural daylighting, low VOC paints, recycled construction materials from site demolition, (almost) no paper products used for restrooms which feature Dyson handdryers and office furniture made of Plyboo. This maiden project illustrates the model Shangri-La will apply to a wide variety of new construction and retrofits as they make use of their $100 million building fund. Hangar 25 is only one of four Platinum LEED Certified buildings in L.A. 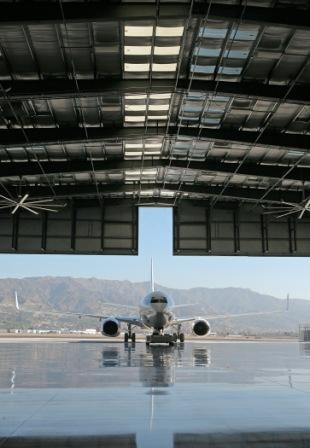 John Picard, "eco-John," began by thanking Mayor Villaraigosa for his green building programs that allow Picard and "green" people like him to pursue their green projects in Los Angeles.

Green building costs less in lifecycle. "Investments can no longer be about a 2-3 year return. We must factor in lifecycle," said Picard. He also noted that a Platinum LEED rating by the USGBC is exceptionally difficult to get. 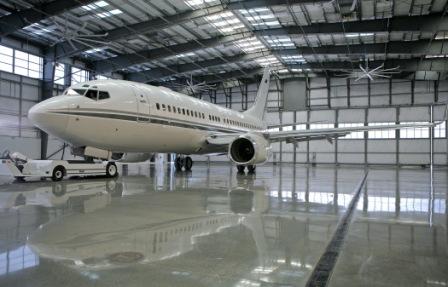 John Picard, Sustainability Coordinator and Environmental Designer for Hangar 25, also known for Greening of the White House Download file. "This project is unique because we over-solar-powered the building so that we could connect aviation to that. Through this building design and the emphasis on the solar, we're able to drive the efficiencies of that solar plan on the roof into an industry.

Are there a lot of things here that were never tried before, like the high-fog system and the way we polished the floors [25 year warranty on the floors = cost saving of $400K]? Yes. Those were transfers of technologies.

But the real important thing here was to have the architects, the engineers, people who just go out every day and build stuff, realize that there's more than just getting buildings designed and built. That there's a long-term lifecycle purpose. And this building connects to its use really well. It's the first time anybody built a building to solar power a whole industry. This building is designed to shelter the aircraft. That's what all hangars do. But now this building is energizing the aviation industry. And that's pretty cool.

When I did the LiveEarth Concert a year and a half ago, and we did a wonderful concert all over the world, we took a lot of criticism for the amount of aircraft we used to fly the bands around. This building takes the very important first step of moving an industry in the right direction. And it happened by us asking, How much more good could we do?"

Picard explained that this is not a singular or stand alone project by any means but one they all hope will be duplicated for aviation hangars throughout the nation and the world. He pointed out that what has been so controversial for private jet ownership now has a bit of an offset by the use of a solar-powered, energy efficient, green building jet hangar as is Hangar 25.

"The greenest thing here is the people. I think this is the thing that will get us out of a global economic slump. Creating a new economy by making the planet a better place." - Picard 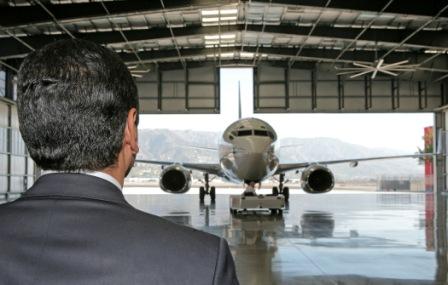 "We want to make our city an international green model," said Mayor Villaraigosa, "And here we have the greenest aviation facility in the entire world. Shangri-La Construction, working with Maguire Aviation, will soon bring the first green hangar to Van Nuys Airport." 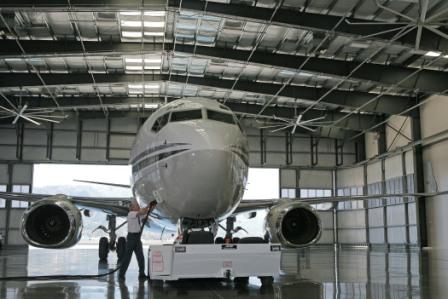 Rick Fedrizzi, President and founding chairman, U.S. Green Building Council, People may ask, 'How could the USGBC give its highest rating to an airport facility for private aircraft? Isn't that oxymoronic when you're thinking of climate change and the opportunities in front of us?' And I have to tell you that we are so proud to award the LEED Platinum plaque to this facility.

This facility is one of the most astounding applications of technology, human intellect, and inspiration, that has come together in a very long time. This is a facility for private aircraft, but the lessons we learn from this are far-reaching. I guarantee that people from all around the world are looking and they are going to want to know all about this and what makes Hangar 25 different.


"You can be green for not a penny more the cost of conventional construction." Rick Fedrizzi, President, U.S.GBC 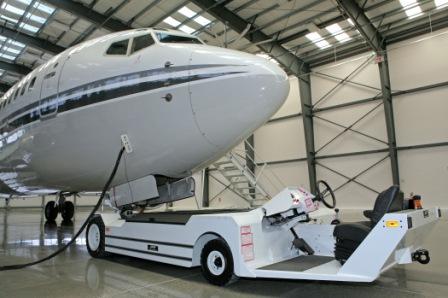 Shangri-La Construction, and the folks who put this together, stepped out of the box and said, 'no more, we're not going to do it the old way.' This is truly a leadership move on their part. This is leadership, when you do the right thing when no one is looking. The knowledge learned from this building will transfer to schools, it will transfer to health facilities, to affordable residential housing. People need examples of leadership, they need examples of what the building does, how it works, how much money is being saved. You can be green for not a penny more the cost of conventional construction." - Fedrizzi


The USGBC has more than 18,000 corporate and organizational members.

Andy Meyers, President, Shangri-La Construction, "At Shangri-La Construction, we have a catch-phrase, 'The bottom line of green is black.' We're not strictly an aviation construction company. We have partners and, for example, we're already retrofitting an existing office tower in Nevada. We're looking at ground up opportunities and retrofits all over the country and all over the world.

People are clamoring for our model because we've been able to provide them the product that they really want for a price that they would be paying for traditional construction. With the attendant benefits of having reduced operational expenses. Things that are associated with sustainability really are of quality so everything we do is of the highest quality."