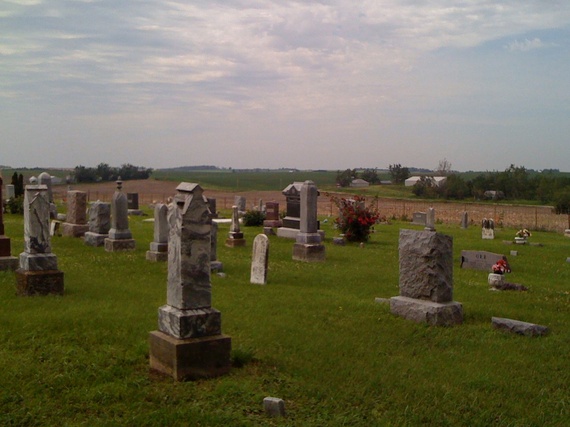 As Jessica Mitford explained in her 1963 blockbuster, The American Way of Death, American funerary and burial practices are incredibly consumptive and expensive. Our strongly entrenched social norm is that the appropriate way to express grief and show love for the deceased is by spending money -- on flowers, a viewing, a casket, a vault, and a prime burial spot. Our practices are in stark contrast to those in other developed countries that seek to hasten decomposition and minimize the land dedicated for burial purposes.

The standard American burial employs a number of strategies to retard decomposition --embalming, using hardwood or metal caskets and steel and/or concrete vaults or grave liners. These practices generate significant environmental consequences. Dozens of hazardous chemicals are utilized in our preparation of human remains for cremation or burial, chemicals that are routinely released into septic and sewer systems. A leading embalming textbook lists 45 "toxic chemicals" which are routinely used in the modern embalming process, most notably formaldehyde and phenol (carbolic acid). A typical 10-acre patch of cemetery ground contains enough furniture-grade lumber to construct 40 houses, nearly 1,000 tons of steel, 20,000 tons of concrete, and enough embalming fluid to fill a small backyard swimming pool.

To environmentalists, the modern American cemetery no longer resembles "God's Acre" -- a garden for the living to remember the dead and contemplate their own mortality. Instead, the modern American cemetery, an unnaturally green field of mowed grass sparkling with pesticide, is regarded as a toxic landfill, leaching chemicals and metals into the soil and groundwater; filled with remains trapped in an anaerobic environment and denied the natural decomposition of "ashes to ashes, dust to dust."

Many environmentally-conscious Americans have therefore eschewed ground burial in favor of cremation. The American cremation rate is growing fast, but it poses its own environmental problems including consumption of fossil fuels and discharge of mercury into the atmosphere.

A 2007 survey on death planning conducted by the AARP found a significant level of interest in more environmentally-friendly methods of disposition. Organizations like the Green Burial Council promote these methods. For example, "green burial" typically involves burial without a casket or in a casket made of sustainable, biodegradable materials such as woven seagrass and bamboo. There are a number of dedicated green cemeteries in the United States, such as Ramsey Creek Preserve in Westminster, South Carolina.

A new twist on the natural burial concept by Italian designers proposes to encase human remains in an egg-shaped burial pod which serves as a source of nutrients for a newly planted tree.

Another new concept is the ritualized composting of human remains. The Urban Death Project, a non-profit based in Seattle, has created a Kickstarter campaign with a goal of $75,000 to fund the second phase of development of its composting system and the creation of a 3-D model and engineering drawings. The goal of the Urban Death Project is to build the first composting facility in Seattle and then create a toolkit to duplicate the model across the United States and around the world.

All of these ideas -- green cemeteries, burial pods, and composting systems -- reveal a growing discomfort with the expensive and consumptive nature of the American way of death. But change will not be easy. Our social norms are highly entrenched, and the death care industry (funeral homes, cemeteries, and casket manufacturers) are heavily invested in maintaining those norms. Funeral homes and cemeteries are regulated by the states, largely by occupational licensing regimes with high barriers to entry that discourage innovative market entrants. At the same time, laws rooted in traditional Christian beliefs about death and resurrection establish rules for the treatment of human remains.

It is a general principle of American common law that every person is entitled to a decent burial. Before interment, human remains must be treated in accordance with "ordinary requirements of decency and common morals." Cases have held that human remains may not be "cast out so as to expose [them] to violation or so as to offend the feelings or endanger the health of the living." No person may "cast [a corpse] into the street, or into a running stream, or into a hole in the ground, or make any disposition of it that might be regarded as a nuisance, be offensive to the sense of decency, or to be injurious to the health of the community." As recently as 2002, the "improper disposal of a dead body" has been recognized as a common law offense. The Model Penal Code includes a crime called "abuse of a corpse" that is committed when a person "treats a corpse in a way that he knows would outrage ordinary family sensibilities." This vague standard is the law in approximately 15 states. It seems likely that, at least in the foreseeable future, burial pods and human composting would "outrage ordinary sensibilities."

The law of human remains is complicated and largely unexamined by modern legal scholars, courts, and legislatures. It is often far more restrictive than we would guess. Those proposing innovative alternatives to the modern American way of death may find that in order to accomplish their goals they will need to change more than social norms -- they will first need to change the law.