Americans who understand the challenge of climate change had to be encouraged by the Paris summit where the nations of the globe, including the U.S., pledged to work together to dramatically reduce the burning of fossil fuels -- before it is too late to avoid disaster.

Activists who want the U.S. to do our part must confront a massive roadblock: the Republican majority in the House, Senate and many statehouses. These conservatives, funded by oil company political contributions, deny that global warming is even a reality or a problem -- and they actively block every legislative strategy for change.

Do we need a carbon tax to make renewables more market-competitive?
-- Conservatives in the Congress denounce the idea as a "job killer."

Support Obama's plan to get states to cut power plant carbon pollution?
-- Right wing groups, flush with oil/coal money, are blocking it as a "job killer."

Want public investment to re-tool the economy for renewable energy?
-- Conservatives believe in austerity and cutting public spending. But hold on. This is a fight we can win: a serious fight for public investment - to retool our energy economy and the jobs of the future. Americans care about good jobs. And most people also intuitively understand that shifting from a carbon pollution-based energy system to a clean renewable energy system will require spending money. And they know in their bones that the transition to green energy and efficiency will create good jobs in a sustainable economy. 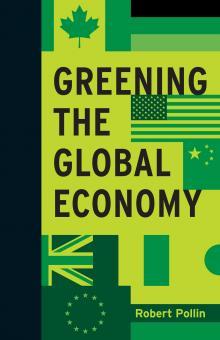 and conservation (over the next several decades) is absolutely necessary in order to get our economy operating at close to zero carbon pollution. While acknowledging the role of the private sector (especially as solar and wind come down in price), he shows how public investment is essential to leveraging the scale of private and community investment necessary to retool our energy, transportation and housing infrastructure to achieve the goal of greatly reducing carbon pollution in America and the world. And his book lays out the huge numbers on good jobs such a retooling would generate -- jobs for poor and working class and middle class people -- all those who lost out during the great recession and our long period of economic stagnation and growing inequality.

Here's the bottom line -- from a recent article in The Nation by Pollin:

For the United States, we found that increasing investments by around $200 billion per year to raise energy-efficiency standards and expand clean renewable production (about 1.2 percent of current GDP) would drop US emissions by 40 percent within 20 years, while creating a net increase of 2.7 million jobs. This is after taking full account of the jobs that would be lost as oil, coal, and natural-gas production fell by 40 percent.

Do you want to stop global warming? Get Greening the Global Economy.
Much of the most exciting work environmentalists activists are carrying out these days is focused on educating the public about the harm climate change is causing. And sophisticated activism -- from the movement to get institutions to divest from polluting energy stocks to the energetic campaigns against oil pipelines, fracking and drilling in sensitive eco-systems -- are designed to send an important message: "Keep it in the ground." These protest movements do raise the costs of dirty fuels somewhat - and they send a political message -- that average folks, indigenous peoples, farmers and ranchers don't want dirty energy development. But once consciousness in raised, we need to build a movement for public investment in massive conservation and for replacing carbon energy with renewables.

If you want good jobs for all, read Greening the Global Economy.
As we have noted, the strongest message dirty energy conservatives put forward against change is "What you are calling for will kill jobs." But as workers know well, jobs in the dirty energy sector last only as long as there is coal or oil to extract. The plan advanced by Pollin would generate millions of good jobs in new, cutting-edge and US-based manufacturing sectors. And the levels of investment he calls for would stimulate sustainable economic growth, overcoming chronic tendency of the world economy to "secular stagnation" lamented by institutions like the IMF and economists from Larry Summers to Joe Stiglitz. Most importantly, the investment plan proposed by Pollin would give working Americans new hope -- and it would give our public institutions a positive new leadership role, from Congress to state legislatures to local school boards. And the movement we will need to reverse global warming needs to be led by Americans fueled by hope for a better life and new opportunities.

Want to take back Congress? Share Greening the Global Economy.
We all know that even with a President committed to addressing climate change, we can't make the big investment changes we need with a Congress dominated by people who don't even acknowledge the problem. This explains why many progressive groups (and the White House) focus on organizing and education work that does not require Congressional action. But polling shows enormous public support for a political movement to defeat climate-deniers and to replace them with leaders pledged to invest in green energy and to create a new generation of good jobs.

Hart Research found that voters strongly favor public investments that create jobs and growth. These were the most popular policies tested:

If the pro-investment candidate says these investments will be funded by "closing tax loopholes for big corporations and the rich," then he/she wins by a decisive 23-point margin (62 percent to 39 percent) over an opponent who says we can't afford those investments.

Presidential candidates Bernie Sanders and Hillary Clinton have both advanced investment plans aimed at retooling the US economy to dramatically reduce carbon pollution and increase our dependence on renewable energy -- and to expand our capability to produce those technologies domestically. As we decide who has the best plan and campaign to win the White House, progressives also need to launch a campaign to win back a Congressional majority committed to a bold agenda for stopping climate change and creating new green jobs.

To see the detailed agenda for change, buy and read Greening the Global Economy. Let's re-launch the green jobs movement by making the book a best-seller. Buy it at Amazon. Or if you want an eBook, go to MIT Press.