Unprecedented melting of Greenland's ice sheet this month has stunned NASA scientists and has highlighted broader concerns that the region is losing a remarkable amount of ice overall.

According to a NASA press release, about half of Greenland's surface ice sheet naturally melts during an average summer. But the data from three independent satellites this July, analyzed by NASA and university scientists, showed that in less than a week, the amount of thawed ice sheet surface skyrocketed from 40 percent to 97 percent.

In over 30 years of observations, satellites have never measured this amount of melting, which reaches nearly all of Greenland's surface ice cover.

When Son Nghiem of NASA's Jet Propulsion Laboratory observed the recent melting phenomenon, he said in the NASA press release, "This was so extraordinary that at first I questioned the result: Was this real or was it due to a data error?"

NASA's cryosphere program manager, Tom Wagner, credited the power of satellites for observing the melt and explained to The Huffington Post that, although this specific event may be part of a natural variation, "We have abundant evidence that Greenland is losing ice, probably because of global warming, and it's significantly contributing to sea level rise."

Wagner said that ice is clearly thinning around the periphery, changing Greenland's overall ice mass, and he believes this is primarily due to warming ocean waters "eating away at the ice." He cautiously added, "It seems likely that's correlated with anthropogenic warming."

This specific extreme melt occurred in large part due to an unusual weather pattern over Greenland this year, what the NASA press release describes as a series of "heat domes," or an "unusually strong ridge of warm air."

Notable melting occurred in specific regions of Greenland, such as the area around Summit Station, located two miles above sea level. Not since 1889 has this kind of melting occurred, according to ice core analysis described in NASA's press release.

Goddard glaciologist Lora Koenig said that similar melting events occur about every 150 years, and this event is consistent with that schedule, citing the previous 1889 melt. But, she added, "if we continue to observe melting events like this in upcoming years, it will be worrisome."

"One of the big questions is 'What's happening in the Arctic in general?'" Wagner said to HuffPost.

Just last week, another unusual event occurred in the region: the calving of an iceberg twice the size of Manhattan from Greenland's Petermann Glacier.

Over the past few months, separate studies have emerged that suggest humans are playing a "dominant role" in ocean warming, and that specific regions of the world, such as the U.S. East Coast, are increasingly vulnerable to sea level rise.

Wagner explained that in recent years, studies have observed thinning sea ice and "dramatic" overall changes. He was clear, "We don’t want to lose sight of the fact that Greenland is losing a tremendous amount of ice overall." 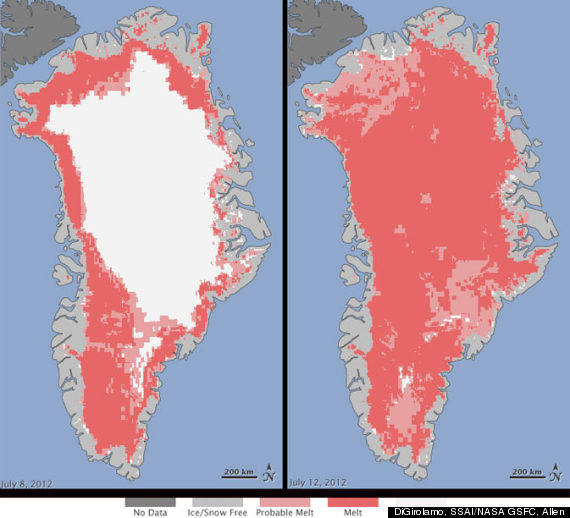 NASA CAPTION: Extent of surface melt over Greenland’s ice sheet on July 8 (left) and July 12 (right). Measurements from three satellites showed that on July 8, about 40 percent of the ice sheet had undergone thawing at or near the surface. In just a few days, the melting had dramatically accelerated and an estimated 97 percent of the ice sheet surface had thawed by July 12. In the image, the areas classified as “probable melt” (light pink) correspond to those sites where at least one satellite detected surface melting. The areas classified as “melt” (dark pink) correspond to sites where two or three satellites detected surface melting. The satellites are measuring different physical properties at different scales and are passing over Greenland at different times. As a whole, they provide a picture of an extreme melt event about which scientists are very confident. Credit: Nicolo E. DiGirolamo, SSAI/NASA GSFC, and Jesse Allen, NASA Earth Observatory