Greenland's melting season usually begins in June, when the first puddles of meltwater emerge, and lasts through early September, when temperatures begin to cool. This year, a full four weeks before the end of the melt season, the ice sheet had shed more water than the record reached during the full season in 2010.

"With more yet to come in August, this year's overall melting will fall way above the old records. That's a Goliath year — the greatest melt since satellite recording began in 1979," said study researcher Marco Tedesco, assistant professor of Earth and atmospheric sciences at The City College of New York.

The results showed extreme melting in nearly every region of Greenland, including the west, northwest and northeast. Particularly, melting occurred at high elevations, where, in most years, the snow and ice melt for a few days, at most. This year, that melting has already continued for two months, Tedesco found. 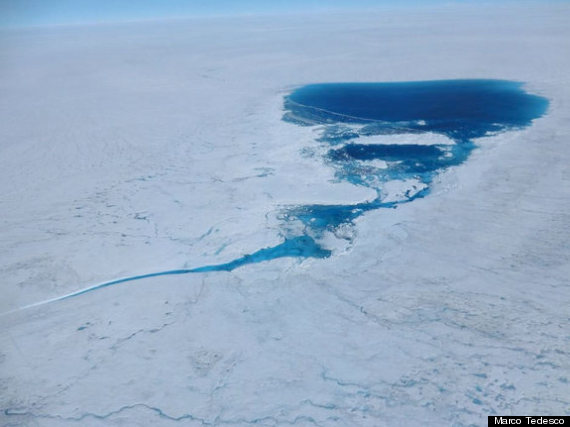 A supraglacial lake over the Greenland ice sheet in the Kangerlussuaq area photographed on July 21, 2012. The lake feeds a stream that will deliver meltwater to the low elevations where it will either flow to the ocean on the surface or dive into the ice to contribute to a hydrological pipeline of sorts.

The meltwater that puddles up on the surface of Greenland can also percolate through the snow and into the ice, lubricating that ice and possibly speeding its journey into the sea.

This meltwater record is different from one announced in mid-July, when NASA satellite images showed that over just a few days, nearly all of the veneer of surface ice atop Greenland's massive ice sheet had thawed, breaking a more than 30-year record.

Most of that ice, however, refroze rather than running off into the ocean or creating streams within or on top of the ice sheet, Tedesco said.

"The melting in terms of how much water was produced is relatively small," Tedesco said of the July event.

As for the cause of the new meltwater record, Tedesco points to warming temperatures. He added that scientists are looking into whether or not this warming is part of a larger pattern of global warming.

"We have to be careful because we are only talking about a couple of years and the history of Greenland happened over millennia," Tedesco noted in a statement.

He added to LiveScience, "It's no doubt that the warming of the Arctic and whatever is related to that is responsible at least for triggering the melting mechanism at the beginning of the season and providing enough gas to keep it going."

Tedesco is referring to a feedback that occurs when snow melts away, leaving bare ice, which is darker and absorbs more heat (called a high albedo) than the brighter snow.

Overall, southern Greenland is going through changes, with the ice sheet thinning at its edges and streams and lakes growing atop its glaciers.