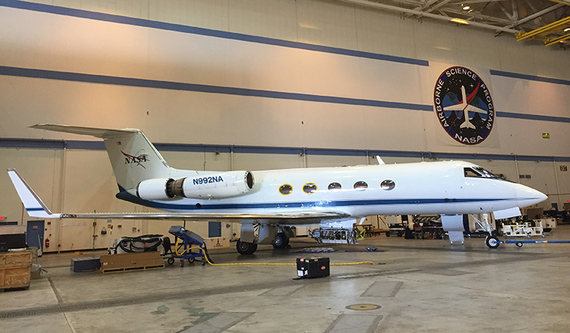 One of NASA's modified G-III aircraft in the hangar at Armstrong Flight Research Center being prepped for a mission to study glaciers around Greenland.

Yes, yes, Greenland is melting. You already knew that, probably. And the giant flux of fresh water pouring out of the second largest ice sheet on the planet isn't slowing down anytime soon. Greenland's ice melt is actually accelerating. In the last decade alone, NASA's twin GRACE satellites measured it gushing 2 trillion tons of ice like a fire hose pouring fresh water into the North Atlantic.

But it's easier to focus on politics, celebrity gossip, reality TV and cat videos than on Earth's climate. It seems like everyone's all "Greenland? Who cares? Whatever. Next." And that upsets me.

Is it really that easy to pretend the effects of global warming don't exist?

We overlook Greenland ice loss at our own peril. It's one of the largest contributors to accelerating sea level rise, and in the U.S. alone, "nearly 5 million people live in 2.6 million homes at less than 4 feet above high tide." If you happen to be one of them, you should definitely pay attention to Greenland.

Fortunately for all of us, NASA is paying attention to Greenland in a big way. We're so concerned about the amount of ice loss that we've named a Greenland observing expedition Oceans Melting Greenland, or OMG for short, because that's the most appropriate response to the phenomenon. 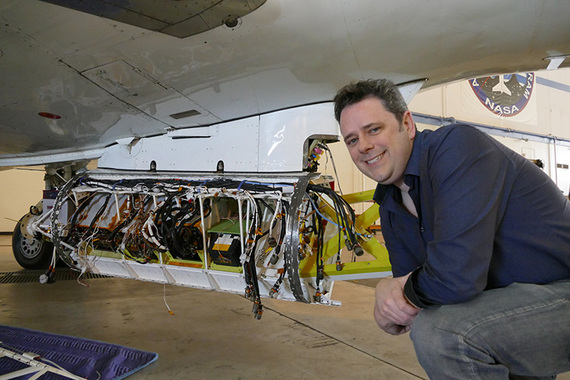 Dr. Josh Willis oversees integration of the GLISTIN-A radar instrument to the belly of the aircraft.

This week, OMG heads up north on one of NASA's G-III modified airplanes to continue a five-year mission that will look closely at how warming ocean water interacts with glaciers surrounding Greenland and melts them. The project began this past year by mapping undersea canyons via a ship equipped with an echo sounder. For this next part of the investigation, a radar instrument attached to the bottom of the G-III, called the Airborne Glacier and Land Ice Surface Topography Interferometer (GLISTIN-A), will be able to measure precisely how much the oceans are eating away at the edges of the ice on a glacier-by-glacier basis.

Instrument integration (a fancy word for attaching instruments to planes and making sure they work and don't come loose) went down at NASA's Armstrong Flight Research Center, and Principal Invesigator Dr. Josh Willis, Project Manager Steve Dinardo, Co-Investigator Dr. Ian Fenty and I headed there to check it out.

Glaciers on the edge

As the technicians and engineers tweaked fistfuls of wires, we crawled in, under, through and around the aircraft. Then Dr. Ian Fenty (who helped design the flight plan) and I sat aboard our flying science lab and talked ice loss for a while. "We often find that a glacier that's been retreating a lot might be in 1,000 feet of water," he explained. "Whereas the glacier that's not thinning very much is in water that's only 100 or 200 feet deep." That's because the layers of ocean water around Greenland are in a very unique situation, where you have colder fresh glacier meltwater near the surface over salty ocean water that, due to climate change, has been warming. The water found at 600 feet and below is a relatively warm 4 degrees Celsius compared with the surface water, which is just near freezing at 0 degrees. This means that the "primary suspect" behind the acceleration of Greenland's melting glaciers is the warming ocean waters that can get right up against the edge and interact with the glacier itself.

As the surface of lower elevation glaciers melts, the water percolates through the ice and forms giant subglacial channels, like a river system under the ice. If the ice running through these narrow rivers breaks off, the friction between the glacier and the substrate gets reduced a bit and literally stretches the ice so the glacier thins out. OMG's GLISTIN-A radar is going to measure the height of the ice. "If we see a change in elevation from one year to the next, we can know how much ice is being lost and how much the movement of the glacier is speeding up." Over the next five years OMG plans to go back to Greenland to look for more changes. 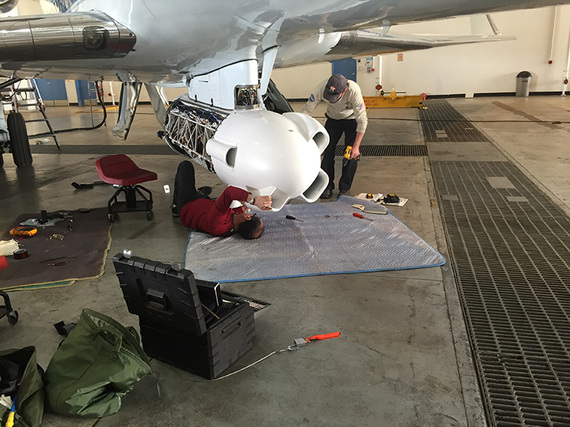 NASA technicians put the final touches on the GLISTIN-A instrument.

As I left the hangar and headed home, I thought about how Greenland is such a weird part of the world and how much I hope our society can put aside its troubles so we can work together to preserve it.

Thank you for your comments.