From the International League of Conservation Photographers:

What do you think of when you hear the word "scientist" -- white-bearded men scribbling formulas on blackboards or huddling over bubbling test tubes? These are not the scientists I know. To challenge this popular stereotype, I teamed up with science writers to document four major polar research expeditions -- to a colony of Adélie penguins, aboard icebreakers in the Bering Sea and eastern Arctic Ocean and to the lake-studded surface of the Greenland Ice Sheet. My goal was to reveal the inner workings of science fieldwork, showing how scientists overcome logistical hurdles, build and deploy instruments and survive brutal weather conditions. I hoped that by visually portraying this adventurous aspect of science, the public -- particularly the younger generation -- would have a new mental image when they hear the word "scientist." [Text continues after images.]

One of the most memorable experiences from this project happened in Greenland. I was photographing a team of glaciologists led by Dr. Sarah Das from the Woods Hole Oceanographic Institution and Dr. Ian Joughin from the University of Washington Polar Science Center. They were studying the lakes that form on top of the Greenland Ice Sheet in summer. These 'supraglacial lakes,' which can be several miles long and up to 40 feet deep, form as snow and ice on top of the ice sheet melt and collect into depressions on the ice. What really interested the researchers was the way that these lakes would suddenly disappear. Using satellite images, they observed that one day there was a lake, and the next day, nothing. Since the water had to go somewhere, the researchers hypothesized that the lake water was draining through the ice to the bedrock. Once under the ice, what effect was that giant slug of water having on the ice sheet itself? To find out, the glaciologists installed a network of very sensitive GPS receivers around several of the lakes and left them to record for a whole year.

One evening, while the crew was working on one of the GPS installations in a thick fog, we began hearing a rumbling sound like distant thunder, followed by steady whooshing and gushing sounds. Although we could only see the edge of the lake, it became clear that the water level in the lake was steadily dropping... We were witnessing a lake drain firsthand. The booming sounds were replaced by explosive pops like rifle shots. Thin cracks opened up in the ice practically right between our feet. Making our way around the lake, we came to a gaping fissure that ran right through what used to be the center of the lake. Waterfalls of melt water disappeared into a bottomless blue crevasse. The lake was gone.

While the detailed plots and calculations from Sarah and Ian's scientific articles explain the physics of how lake water can fracture the thick, cold ice beneath and how the speed of the glacier increases during these events, actually witnessing this epic event really moved me. Photographing these expeditions, with all of the stress, sleepless nights and cold fingers, has been the hardest but most exhilarating job of my life. But the scientists who kindly invited me to join their expeditions, the crews of the ships and field camps who kept me warm and fed, and the readers of the Polar Discovery website who sent in insightful questions and comments all reminded me why I was out there: to share a fresh new perspective on what it means to be a scientist.

About Chris:
Chris Linder is a research associate in the Woods Hole Oceanographic Institution's Physical Oceanography Department and a professional freelance photographer. He has photographed over a dozen scientific expeditions to the polar regions. His images have been featured in Geo, Nature's Best Photography, Outdoor Photographer and Wired. He is an Associate Fellow in the International League of Conservation Photographers.

Chris has a new book, "Science on Ice: Four Polar Expeditions." Each chapter finds Linder teamed up with a prominent science journalist, and together their words and pictures reveal the day-to-day details of how science actually gets done at the poles, from penguin colonies on Antarctica's Ross Island to the Greenland Ice Sheet.

More resources:
Learn more about glacial lakes with this article and video animation. 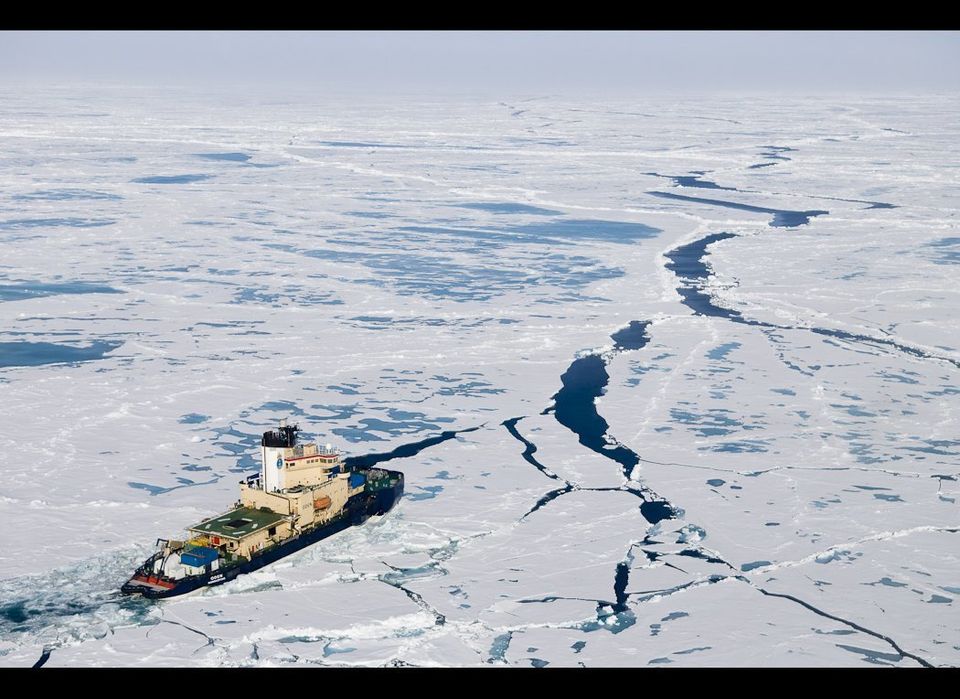 1 / 12
Oden was originally built in Sweden to break ice in the Baltic Sea during winter and to keep the shipping routes open between Sweden, Finland, and Russia. It still does that, but it has also adopted a second career during North American summers as a research vessel, taking scientists to conduct research at both of Earth's poles.
Chris Linder, WHOI