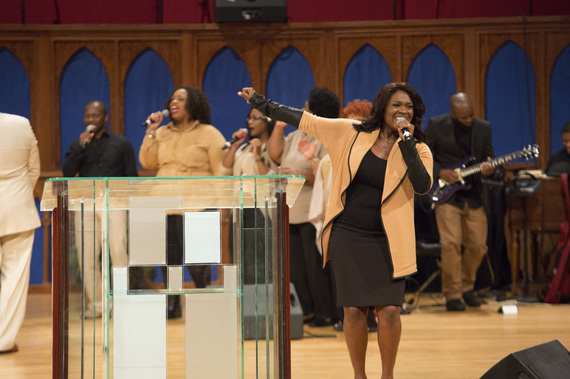 Courtesy of OWN: Oprah Winfrey Network

You heard right- Oprah Winfrey has added an addictive new show to her network OWN. Titled Greenleaf after the scandal-filled family the show revolves around, Oprah and creator Craig Wright offer something fresh with the Mega-Church, Memphis, Tennessee backdrop.
Many will inevitably and unfairly compare Greenleaf to Empire- which is ridiculous because the only thing that the two shows have in common is that they center around black families. If they were about white families, they would never draw a comparison. This is hardly Dynasty and Dallas- and even if it were...is that such a bad thing? The world is certainly big enough for both of them without latching on to the idea that "black television is a trend." And like Dallas to Dynasty, Dallas might have come first, but Dynasty defined the decade. Oprah does not follow a trend- she pioneers. With Greenleaf, there are no stereotypes, lessons for the world, or token characters- it is not pandering to what America is "ready to see." It's a show for all the right reasons- to tell a story. And with Oprah at the reigns, you know the story will always be compelling as she always manages to put traces of her own fascinating truth in her work.
In this case, we find a media journalist (Merle Dandridge) returning home to her powerful, Bible-belt family upon a recent tragedy and stuck between two worlds. Deborah Joy Winans plays Charity Greenleaf-Shatterlee, her babied and overlooked younger sister who is constantly seeking to prove she is now an adult- and the casting couldn't be better. As the vocally gifted youngest daughter whose voice brings the church goers to God, Winans shines- perhaps because it's familiar territory; from the famous Winans family, she is the niece of Gospel-singing sensation, CeCe Winans.
Here, Deborah Joy gives the scoop on her hot new show and what it's like to score such a life-changing role!

This is such a tremendously big moment for you! How did it feel when you got the call saying you would be a lead on OPRAH'S new show? Did you automatically know this would be big?
It was huge the moment I found out about it. I knew it would be so big. I'm sure it will be bigger than what I still think now. I'm just overwhelmingly grateful for this opportunity.

Speaking of hitting the jackpot- you've already been renewed for season 2- before the first episode even premiered!
Right!? This is just amazing! I found out from one of my cast mates first because I wasn't able to be in Tribeca when they did the first screening, and all I could think was; "Really? Already!? How is that still possible?!" And then my publicist, the writer, the creator, everyone started calling me- and I was like; "Oh my God, this is really real." It's just amazing.

And again, as if you didn't hit the lottery enough, you managed to hit the trifecta- your love interest on the show, Tye White, is one of the hottest guys imaginable! You guys have great chemistry. Talk about working with Tye.
(Giggles sweetly) Yes, he is very attractive! It's been incredible to work with Tye. I've never been in this position or really had a love interest before, so to come into it where we are already married for three years, I thought would be rather difficult. But, he's such a professional and he made it so easy. He's just a good person in general so I just think it made it easier to get to know him and understand our couple's relationship.

So many channels are re-branding themselves and offering more hard-hitting shows. Is this OWN's answer to serious scripted television?
I definitely think that it will not only change the network, but make it more diverse and add more to it! OWN is already so wonderful and they are really branching out and adding more under their umbrella to have more viewers.

What do you think about the unfair comparison that will inevitably be made between Greenleaf and Empire?
Greenleaf is nothing like Empire. I think Empire stands alone in what they are doing. It's a wonderful show. The only thing that is similar though is that they are black families- the shows in it of themselves have very different dynamics. They are not the same at all. There's no reason why they both can't exist in the TV world. Greenleaf is about family, but also about faith, and failure and real human life. It's about how in order for them to get through this life and these failures they have to find the faith that they started with- it's very different. People shouldn't try and compare these shows at all. They are both very well done, very well written, and very, very different. There's a little bit of music in Greenleaf, but music is the thread that holds Empire together.

Some early comments from excited future-fans say that this show doesn't rely on stereotypes and that it's actually relatable. How does that make you feel?
Well, I think that's what makes Greenleaf such a gem. It's very relatable. Our creator, Craig Wright, was very much into talking to the actors and making sure that not so much just his ideas were coming across, but that they were real and that we as people could actually relate to what we were doing and what was happening. And I think that will be what viewers can relate to- they might have been through it, or known someone who has. And especially using the setting of a church, a lot of people can relate to things through faith, and when they make mistakes they cling to that faith to get them back to where they want to be. So, it's very relatable and I think that's what people will love about it- it's truth. 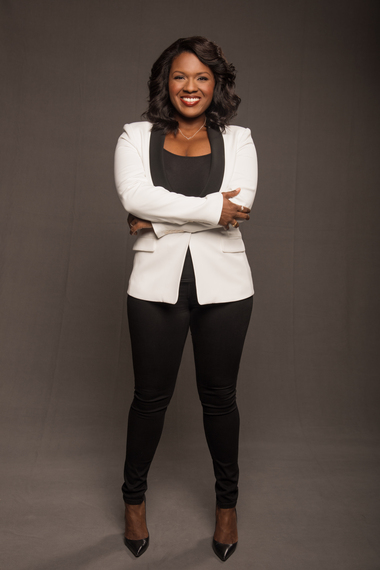 Courtesy of OWN: Oprah Winfrey Network

Tell us a little bit about your character, Charity, and what it's like to play her? How alike are you to Charity?
We are very similar because in the beginning you'll see she doesn't just want to sing, she wants to do more and I actually never wanted to sing- which in my family is rare. I always loved acting, and that's what I wanted to do. It's funny that my first big role is a role where I'm going into a studio to record my singing (laughs.) So, I think we're similar in the fact that, yes, we have this gift- but it's not necessarily what we want to do, we want to focus on other things. We are also both from very big families where you don't always feel seen, you always feel loved, but maybe not always very visible. That's totally what Charity goes through- she feels very invisible. And that only intensifies when her sister comes back and she feels more forgotten, so she's trying to press her way through and figure out how she can be valued.

This show has a lot to do with spirituality and church- so much so that the most moving moments are actually the choir moments! It almost seems shocking too- because so many Christians feel like Christianity is being attacked by mainstream media and there isn't really anything for them- which this show covers. But Greenleaf never really denounces Christianity, in fact, it's very positive. Do you think it will draw in that crowd? Do you think it might turn away some viewers?
I do think it will draw in a faith-based crowd, but I think it will draw in so many crowds because it's for everyone. I think it's interesting that you say the choir moments are the most moving because as I speak about my own character, Charity, that's the only place where she feels free. She relies upon that relationship with the Lord. I think it's easy to be moved because the characters are the most moved. There's nothing inhibiting about that place (the church) in the show. The choir moments are very true and freeing, and we are glad that they can move the audience. I agree that it's great the show celebrates this faith since that isn't done a lot right now in media, and the creator makes it important that the show never shames it. We never wanted to make anyone feel bad about their faith. 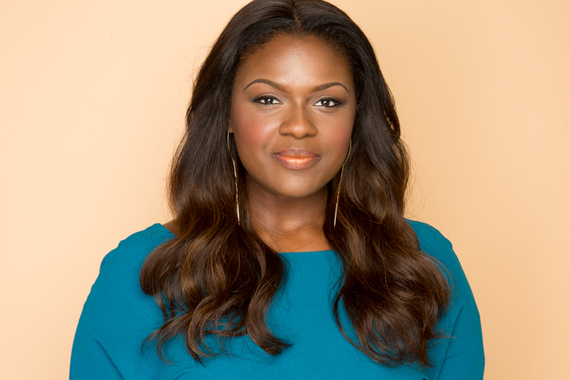 You are obviously very familiar with Gospel families yourself having grown up in one of the most famous Gospel families of all time. How was that? Is your faith important to you?
It's very important. I love the Lord. I did grow up in a gospel family... you may have heard of it? (Giggles) So, I had that foundation coming into this. When I told Craig [Wright] who I thought my character was, he said I was right on the money. For Charity, she feels incredibly underappreciated, and during worship she feels free. And the worship part of service has always been my favorite part as well because you really can free yourself and be ready for the word that God has for you.

Speaking of your family, You are the niece of CeCe Winans- a role you played in Angela Bassett's Whitney, and then again just recently on stage in Born For This. Is she one of your role models? Did she teach you to sing?
She's absolutely a role model- I call her "Mama C," because she wanted to be everybody's mama. It's been an honor to be able to play her in both Whitney and Born For This- which will be on stage again in Washington D.C. on The Arena Stage from July 1st to August 28th. It wasn't hard for me to play her because I know her- our family is very close. There were some things my uncle would point out that I would do in my process that I wouldn't even know that I was doing that were uncanny in the resemblance, but it really is just a DNA thing. As far as singing, she didn't quite teach me- I would certainly listen to her records which lent a hand to it. I would listen to all of my family sing. In the play I act alongside my brother Juan, and he is one of the best singers I ever heard in my life- he really helped me build confidence in my singing because it was a muscle that I hadn't used. It's a great gift that God has given my family, but with any gift you have to work at it.

You get to sing in the choir on the show- which fans will undoubtedly love. Any chance of an album from the show with you on it? What about a solo album?
I'm sure they will probably do some music from the show- maybe make it available on iTunes or something? We haven't really spoken about it. I'm definitely not at the point where I would tell people that I'm a singer or make an album- that's not a passion of mine. But, I am certainly open to creating a record that reflects Charity for the show. As for me, personally? I don't know how I feel about that yet.

Can you tell us any other juicy tidbits from your character, or what to expect?
I can't give much away, but in the beginning she might come across jealous or a little aggressive, but I think they will come to love her by the end of the season!

Don't worry, Deborah Joy, with a set of pipes like that, there's no doubt that fans will all love Charity by the end of episode one.
Greenleaf premieres June 21st on OWN.