OSLO, April 15 (Reuters) - Environmentalists have placed a flag on the seabed under the North Pole to urge protection for the region in a rebuff to Russia which planted a flag in 2007 in a symbolic territorial claim.

Four campaigners, backed by Greenpeace, cut a hole in the ice at the North Pole at the weekend and dropped the flag and a capsule with almost 3 million signatures asking for the region to be off-limits to exploitation, Greenpeace said on Monday.

A Russian submarine planted a flag on the seabed in the same area, about 4,261 metres (13,980 ft) deep, in 2007 to support its claim that it has the right to any oil or mineral resources between its coasts and the North Pole.

The Arctic holds 15 percent of the world's undiscovered oil and 30 percent of undiscovered gas, according to U.S. official estimates, raising fears of a "cold rush" in the remote environment despite high costs, winter darkness and ice.

"I offer my full support to these young people who travelled to the North Pole on behalf of those whose lives are being turned upside down by climate change," South African Archbishop Desmond Tutu, a winner of the Nobel Peace Prize, said in a statement.

U.S. actor Ezra Miller, one of the four people who travelled to the North Pole to drop a multi-colour flag atop a glass and titanium globe, added: "Melting ice is a catastrophe, not a profit-making opportunity."

The extent of Arctic ice shrank in 2012 to the lowest since records began in the 1970s, in a long-term trend widely blamed on manmade climate change. Several studies project that the Arctic Ocean could be free of ice in summertime by 2050.

The Greenpeace group had intended to lower the flag with a long cord. But cold complicated the plan and it was eventually cut free to sink, Greenpeace spokeswoman Anna Jones said. 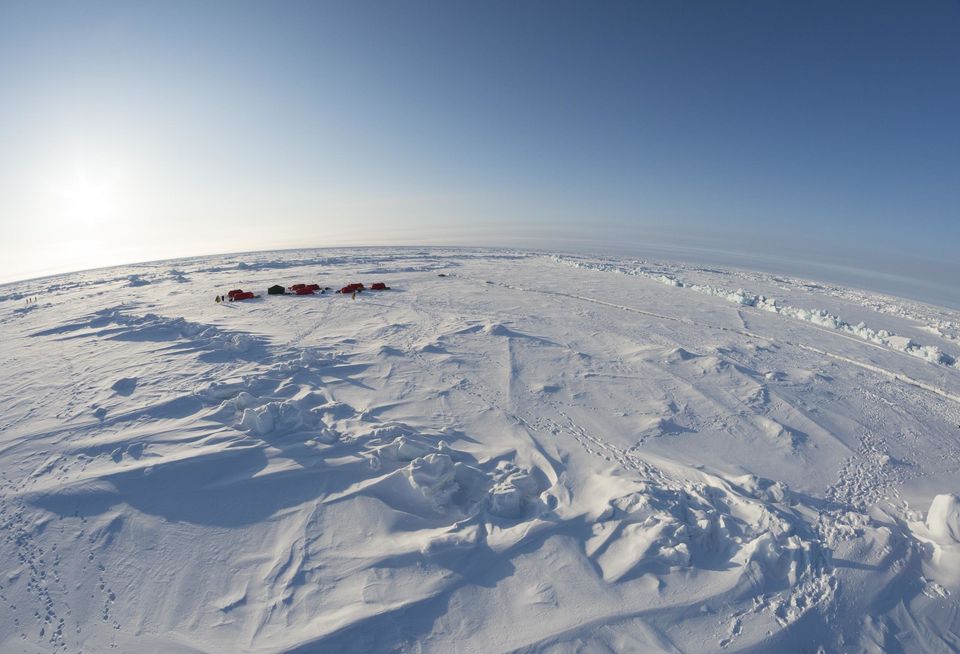 1 / 25
Team Aurora Arrives at the North Pole
A Greenpeace encampment at the North Pole, shortly after the team's arrival. The Greenpeace team has brought a time capsule containing 2.7 million names of supporters who wish to protect the Arctic. (04/13/2013)
© Christian Åslund / Greenpeace