Greenpeace is apologizing to the people of Peru after pulling a stunt at the site of the sacred Nazca lines. Government officials claim the action damaged the ancient markings.

Before dawn on Monday, 20 Greenpeace activists went to site of the historic Nazca lines and laid out massive yellow letters reading "Time for Change: The Future is Renewable.” Currently, the United Nations is holding the Lima Climate Change Conference in the country, and the stunt was apparently intended to catch the attention of officials gathered there.

According to a press release on Greenpeace's website, the group meant for the message -- which can be seen from the sky -- "to honor the Nazca people, whose ancient geoglyphs are one of the historic landmarks of Peru. It is believed that one of the reasons for the Nazca’s disappearance can be linked to massive regional climate change."

However, the government of Peru did not take it as an honor.

"It's a true slap in the face at everything Peruvians consider sacred," Deputy Culture Minister Luis Jaime Castillo told The Associated Press.

The Greenpeace activists entered a "strictly prohibited" area near the famed figure of a hummingbird, according to the Associated Press. Entrance to this area is permitted only with authorization, and those who get approval must wear special footwear.

"They are absolutely fragile," the minister said of the geoglyphs. "They are black rocks on a white background. You walk there and the footprint is going to last hundreds or thousands of years. And the line that they have destroyed is the most visible and most recognized of all." 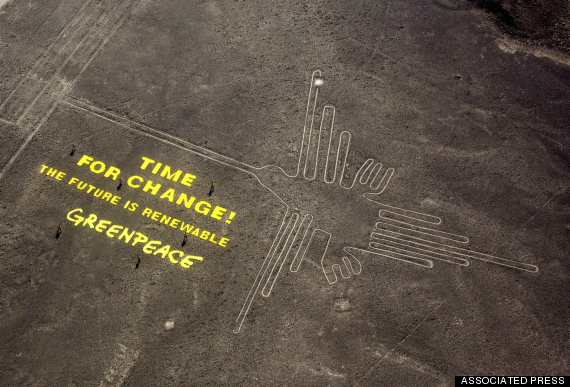 The Peruvian government plans to open a criminal investigation into the matter and is reportedly attempting to bar those who participated in the act from leaving the country, per Reuters. A charge of "attacking archaeological monuments" carries a sentence of up to six years in prison.

A spokesperson for Greenpeace told The Huffington Post that International Executive Director Kumi Naidoo is in Peru and plans to meet with authorities. The group is looking into the incident and "taking this very seriously."

Greenpeace apologized in a statement published to its website Thursday, saying:

Without reservation Greenpeace apologizes to the people of Peru for the offense caused by our recent activity laying a message of hope at the site of the historic Nazca Lines. We are deeply sorry for this.

We fully understand that this looks bad. Rather than relay an urgent message of hope and possibility to the leaders gathering at the Lima UN climate talks, we came across as careless and crass. We have now met with the Peruvian Culture Ministry responsible for the site to offer an apology.

The Nazca lines feature hundreds of straight lines and geometric figures, along with 70 animal and plant designs made by moving rocks and dirt to create a "negative" image, according to National Geographic. While mystery still surrounds the site, the lines are believed to have been etched between 500 B.C. and A.D. 500, according to the United Nations Educational, Scientific and Culture Organization. It was designated a UNESCO World Heritage Site in 1994.