Greenpeace activists hung massive protest banners on the Mattel headquarters building in El Segundo, California. The posters, depicting an unhappy Ken doll, state, "Barbie, it's over. I don't date girls that are into deforestation."

Activists dressed as Ken dolls lowered themselves down the fifteen-story building to hang the banners. They were joined by a female activist dressed as a Barbie doll, who drove a pink bulldozer while handing out flyers to Mattel's employees. At least eight of the activists, including "Barbie" were arrested and charged with conspiracy and trespassing, reports Reuters

Greenpeace is targeting Mattel for using paper company Asia Pulp and Paper (APP) to package their Barbie and Ken dolls. According to Greenpeace's site, APP is "Indonesia's most notorious rainforest destroyer," and tropical rainforests are being deforested for "cheap, throw-away toy packaging."

APP joins Golden Agri-Resources (GAR) as the latest Sinar Mas subsidiary to be targeted by Greenpeace. A campaign targeting Nestle successfully stopped the company from sourcing palm oil from GAR. From the LA Times: Both APP and GAR are subsidiaries of Sinar Mas, a giant conglomerate of more than 100 companies controlled by the Indonesian-Chinese family of Eka Tjipta Widjaja, a politically connected billionaire.

All photos courtesy of Greenpeace. 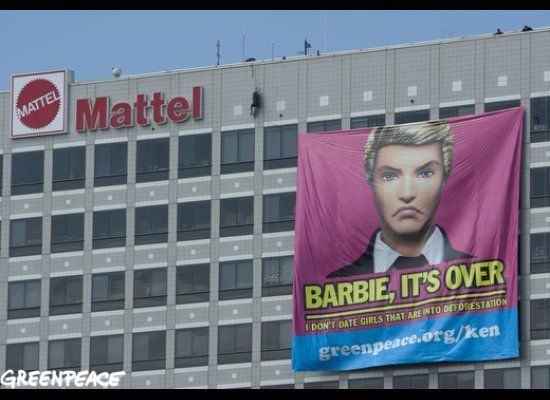