In the history book of bad ideas, the concept of giving corporations the right to censor the internet has to rank among the worst ever.

That's what the impact of two bills recently introduced in the US would be if they, or anything like them, were enacted into law, and it's causing a righteous ruckus among free speech activists around the world.

In solidarity with major internet sites like Wikipedia, Boing Boing, and Reddit, the Greenpeace International website will be dark for 12 hours on the 18th of January to protest these two bills specifically, and the idea of empowering internet censorship in general.

If you don't know what SOPA and PIPA are, you should look them up. While touted as efforts to curtail film and music piracy, they have the potential to allow corporations to censor online activism as well.

In a nutshell, these bills will enable corporations to effectively shut down websites that they believe are infringing their copyrights and trademarks. All they have to do is file notice (not prove to a court, but simply file notice) that their copyright has been infringed to a service provider, such as the one which registers the name greenpeace.org on the internet, and that entity has 5 days to take action to end service to the site.

If in fact there was no copyright infringement, the service provider is immune from lawsuit by Greenpeace for taking the site down or suspending any other services.

In effect, the law says that copyright infringement is so great a crime that corporations can play judge and jury, presume guilt, and possibly infringe civil rights, free speech, and privacy in the defense of their interests.

They can demand that search engines and social networking sites block access to the targeted site, and that payment services and advertisers cease doing business with the accused site. A previous provision, that internet service providers block access to the site through the domain name system, has for now been removed: a good thing, perhaps, but not if it means a better chance for the rest of the bill's draconian measures going through.

So what's this got to do with online activism?

Well, it so happens that trademark infringement is part of the bill as well -- and that is an open invitation to corporate abuse of SOPA/PIPA to silence critics.

At Greenpeace, we've managed to put some judo moves on some mighty corporations by leveraging their own advertising budgets against them. Whether it's spoofing VW's most expensive superbowl ad of all time, jamming the Exxon logo, spreading the word about a spoof of the American Petroleum Institute's support for the Keystone XL tarsands pipeline, creating a Kit-Kat ad that illustrates the rainforest destruction inherent in palm-oil production, or putting up a look-alike Apple.com website, we've rigorously exercised our right to free speech in freely speaking out against corporate abuse of the environment, and won many a campaign victory doing so.

We use their own language, their own marketing, their own strength against them -- which is sometimes the only way that an entirely supporter-funded operation like ours can afford to put a spotlight on the negative side of their operations.

Thing is, while court case after court case has agreed with us that parody is a protected form of free speech, the corporations at the pointy end of our parodies tend to disagree. Exxon/Esso took us to court in France over alleged copyright infringement of their logo when we launched a campaign against them. 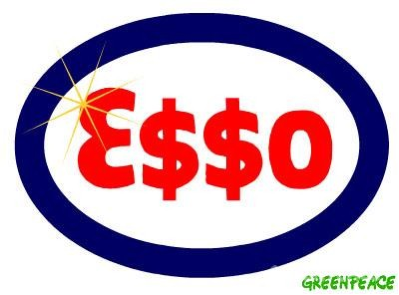 Esso said we were in violation of their intellectual property rights. We said it was free speech. The court agreed with us, and in an historic decision, we won. But had that decision been left to Exxon/Esso, we would have been shut down.

Nestle's Kit Kat brand famously failed when they attempted to have a video featuring their brand -- and critical of their support for rainforest destruction -- removed from YouTube for trademark violation. Hundreds of our supporters reposted the video on other sites and their own Facebook profiles.

Eventually, YouTube's lawyers intervened and the video was restored. Under SOPA, YouTube itself could have been shut down for hosting our Kit Kat video. Facebook could have gone dark for hosting supporter samizdat. Greenpeace.org would have gone dark worldwide. And Kit Kat owner Nestle never would have been compelled by our supporters and their customers to revise their policy on palm oil procurement, a move which has struck a major blow to an industry which is mowing down orang-utan habitat in Indonesia to plant palm trees.

Which is why you need to oppose SOPA/PIPA. While the Obama administration has indicated they would veto any bill with some of the more draconian measures that have been considered, and SOPA itself has been "shelved indefinitely" we need to send a message, loud and clear, about how far we'll go to stop corporate censorship.

If you are a U.S. citizen, write your representative. If you live outside the US, sign this petition. If you want to do more, check out these suggestions from the Electronic Frontier Foundation.

More than ever, the networked world is holding corporate interests accountable for their environmental and human rights abuses. Don't let people power be silenced. Stop corporate censorship of the Internet.