The name Greenpeace has become synonymous with some of the most intense environmentalism of the past four decades. Now, a new leader is poised to take the helm of Greenpeace USA and steer the organization into a future full of fracking, pipelines, poaching and climate change.

The Huffington Post spoke with Annie Leonard, the soon to be executive director and voice behind the Story of Stuff project, to see what she envisions for the future of our planet, and if she has any plans to get arrested in the near future.

You started with Greenpeace in the 1980s -- when did you first get interested in consumerism and waste?

I was fascinated as a college student about what all this garbage was, because every day there would be shoulder-high piles of this stuff and I went as a college student to a dump where New York City's garbage goes, Fresh Kills Landfill on Staten Island, just because I had never seen mass like the garbage in New York City. I was absolutely stunned to look out at this mass of waste and as far as I could see in every direction there was food and furniture and appliances and shoes and books and I was so flabbergasted that our economy was set up in such a way to turn resources into waste at this scale, and that it was so hidden. 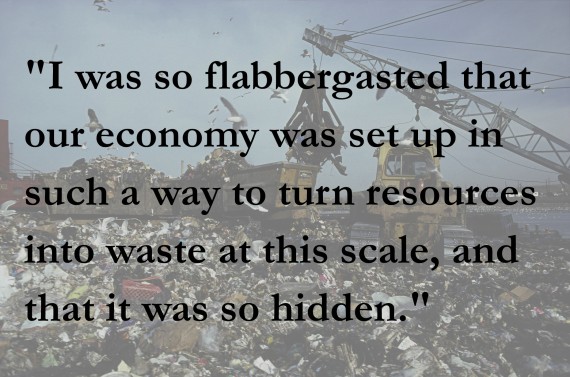 It was a fascinating time, this was the late 1980s and this is right when interest in waste was exploding in this country, partly because landfills were filling up ... and our idea at Greenpeace was to make it as expensive, politically unpopular, strictly regulated as possible to get rid of your waste, in order to put pressure upstream.

What we did not foresee is that some total schmucks would be so committed to making waste and putting it out of sight and out of mind that they started loading it on ships and sending it to third world countries ... and nobody knew what was happening to this waste overseas. Greenpeace basically said, who wants to go to Pakistan and the Philippines and China and who wants to find out what's happening. And I was 20-something and I had no child and no mortgage so I said "Me!"

How did that morph into what became the Story of Stuff?

Around 2005 I was really getting so frustrated that for most people we don't understand all the stuff in our lives, we don't understand where it came from, where it's going. So I was experimenting with ways to talk about these issues that wasn't a drag, you know so much environmental stuff is so whiney and wonky and it's all about guilt and fear and "shame on you for having a cell phone" and "if you just recycle it'll all be alright." Sometimes environmentals are such a drag, so I was wondering is there a way to talk about this in a way that's inviting and accessible, and that's how I came up with the "Story of Stuff" film.

How is this awareness of consumerism going to translate into Greenpeace's mission?

I mean it's so related, look at Greenpeace's priorities. Forests, look at how we use paper, when I was opening up those bags of garbage in New York City 30 years ago, I could not believe that it was almost all paper, and still today, today when recycling has been a household word for at least a generation, still 40 percent of our garbage is paper! There's only so much you can do if you're just trying to stop the trees from being cut down, you also got to stop the paper from being wasted.

In terms of Greenpeace's strategy of direct action, a lot of that is spurred on social media now. How do you think that plays into the organization's activism now?

What we had back [when I started at Greenpeace] was the canvass, which knocked on 26,000 doors a night, and I used to lobby on Capitol Hill and to be able to say, "I can reach 26,000 people and tell them what you think about this bill" was an incredible resource. I felt like I had these giant muscles on Capitol Hill because of that canvass. So social media has allowed us to magnify that and amplify that so we can reach millions and millions of people. And that part is totally fantastic.

The catch is, we can't stop once we reach them on social media. You know I'm very aware of the pitfalls of clicktivism or slactivism. I like to think of the social media connection as the handshake. But you don't have a relationship just because you shook hands. You shake hands and then you have to deepen the relationship, so I want to really learn what Greenpeace is doing in this and then help beef it up.

Greenpeace is sometimes considered a fringe group in terms of its polarizing nature. With the Story of Stuff, recycling is something everyone can relate to and get on board with. Is Greenpeace ever too polarizing, or do you think the organization should shift towards a more relatable approach? 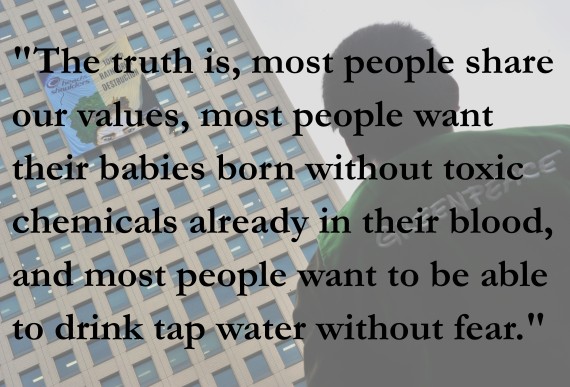 Sometimes I think with environmentalists the sort of values are assumed and we lead with something else, but leading with the values casts a much much broader net.

That said, I'm not afraid to polarize too, I think we need to be really courageous, I think we need to stand up for what's right, and it's going to make some people uncomfortable. And you know what, sometimes we need to get a little uncomfortable. So I want us to be inclusive and welcoming without letting go of the core mission that we're on, which is to figure out how to live on this planet that is more sustainable and healthy and just.

A lot of environmentalism is very doom and gloom, but you sound very optimistic about the future. Do you think we need more optimism, or should we stick to the scare tactics?

I think we've gotta be optimistic, are you nuts? I mean god, there's so much good stuff happening all over the world. I mean every single place I go there are people that are rebuilding local food systems, that are strengthening their community so that they can meet their needs with buying less stuff, that are reclaiming roads for gardens or bike paths, that are integrating environmental education into school. I mean look at how solar and wind is just exploding on so many fronts.

It is going to be hard to convince everybody else that a better world is possible if we don't really believe it. So I surround myself with evidence so I can incorporate that knowledge that it's possible into every cell in my body. I just want to radiate that possibility because I know it's true.

Another reason to be hopeful is it's a decision I made. I mean there's evidence out there that things are really bad and there's evidence out there that things could be better. And each one of us every day when we wake up can decide where we put our energy and where to put our focus, and I've decided to focus on the hope for a better future. That doesn't mean I'm disregarding or dismissing the seriousness of the problems, I totally get that. But I find that I am a better agent for change if I'm focusing on the hope.

And I also find in many ways that it's my ultimate act of personal resistance. I feel like the polluters have taken so much from us. You know they've contaminated rivers that we used to swim in as kids that we can no longer swim in in. You know I breastfed my baby and I couldn't even do that without fear because I knew about the toxic chemicals. We've all lost loved ones to cancer. Those polluters and planet-wreckers have taken so many things from us, I am really drawing a line in the sand and saying you cannot take my sense of hope, you cannot take the quality of my day, I am going to get up every morning full of joy and go to battle with them. 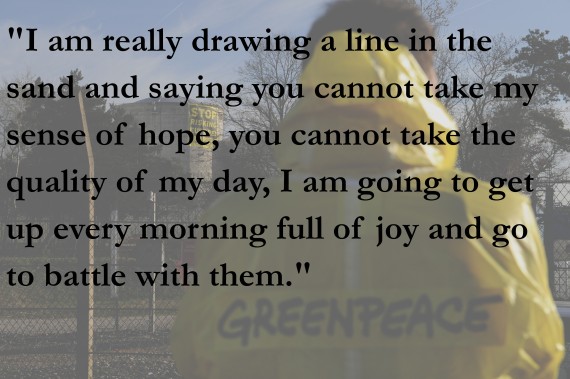 What are Greenpeace's biggest challenges in the future?

I don't know if this is the biggest, but one of the challenges that we're going to be facing is getting our members to get more active in building solutions. We have a phenomenal membership that is incredibly loyal and that has allowed Greenpeace to be so fiercely independent. We need them to join us in protests, we need them to engage their communities and recruit neighbors and friends and bring these issues up in everything from church to city council meetings to PTA meetings. So we really want to enroll them not just as financial supporters but also as active change agents.

Any plans to get arrested soon?

I'm sure it'll happen. I'm sure it'll happen -- I was just thinking about this this morning as I was walking my dog and sending my kid off to school because I'm a single mom and I was thinking "Who am I going to have as backup to take care of my kid and dog when I get arrested?" But you know what, we've got to all support each other. I'm sure I can find someone to drive my kid to school if I'm in jail.

Annie Leonard will take over as Executive Director of Greenpeace USA in August. You can follow her on Twitter @AnnieMLeonard

Women Of The Green Movement