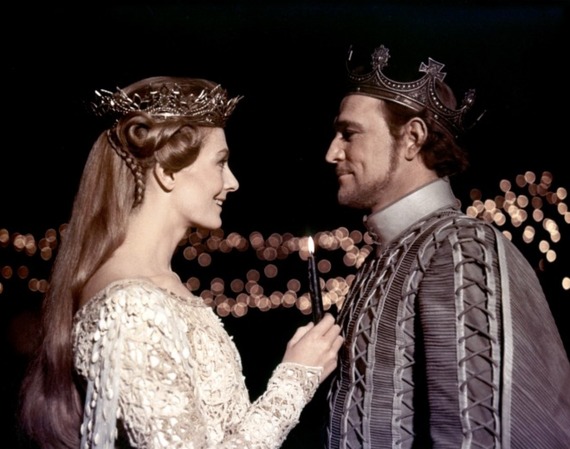 Beltane, also known as "May Day," is the ancient Celtic fertility holiday that celebrated the rites of spring with much frolicking and fun. It begins at sundown April 30th and lasts all day on May 1.

Beltane signals the beginning of the bright half of the year. It means "bright fires," or "brilliant fires."

It is also the holiday of soulful love, a time when we feel called to open our hearts and or connect more deeply with others. It celebrates love, attraction and courtship, and "spring fever" or "mating season."

Many modern couples decide to marry, or pledge their love in a sacred ceremony or hand-fasting on this holiday.

It is major Sabbat in Earth and Goddess-based spirituality, and participants continue to enact some aspects of these rituals around the world.

One of my favorite examples of Beltane is the scene in the movie, Camelot, where Queen Guinevere (Vanessa Redgrave) goes off with her court "a Maying." She sang the famous Lerner and Lowe, "It's May."

Beltane originated among the Celtic peoples of Western Europe and the British Isles, particularly Ireland, Scotland, and Wales, home of my ancestors.

In ancient times, two great fires would be lit, made with healing herbs. The light would guide the townspeople through the night, and some would jump skyclad over the flames and or rides their animals between the two fires to be blessed by the sacred smoke.

Beltane heralds the beginning of the bright time of year, a time when we emerge from the darkness of winter into lighter, airy days. Makes us want to open our hearts and feel the warmth of the sun.

The ancients had been cooped up in doors for a long winter. Beltane came at the peak of spring, and brought life back to the people and the land.

In Beltane: The Lovers Entwine, it's explained this way: "Beltane, or May Day, as it also known, occurs at the peak of Spring. This is the time of year when the earth basks in the gentle embrace of the sun's warmth. The warmth of the sun helps plants blossom, crops fertilize and the rivers overflow with the melted snow of winter past. Animals frolic about searching for mates. People fall in love and consume each other in fiery passion."

The reason this holiday is so sexy yet sacred is that it is symbolic of the passion and love between the Goddess and God. Divine passion, it was believed, was evident in all of nature's bounty springing forth this time of year.

The ancient custom in villages was to have a fertile couple to represent the King and Queen of the May. Dancing around the maypole was a focal point of activity. The Maypole was made of oak, and had ribbons of many colors. Women would grab a ribbon and dance around it and the last woman left holding the ribbon would be crowned the May Queen.

It is said that a wedding feast, symbolically honoring God and Goddess, was prepared in advance of the dance around the may pole and that all would partake.

The May King and Queen would then consummate their "marriage" as a symbolic gesture of fertility. All the townspeople would emulate them and head off to partake in some sacred love. It was a bit of free love and wanton lust sometimes called "Greenwood Marriages."

As an ode to nature, and as an offering to God and Goddess -- maids and lads would frolic in the fields from sundown to the morning after. Part of this celebration included enacting the rites of fertility as an offering to ensure continued fertility of the lands as well as the continuation of the tribe.

It's been said that the annual Beltane Baby Boom, nine months later was legendary in ancient times.

Bringing in the May

One of the most beautiful customs associated with this festival was called "bringing in the May." The young people would go out into the fields on April 30th and gather flowers with which to bedeck themselves, their families and their homes.

They would process back into the villages, stopping at each home to leave flowers, and to receive the best of food and drink that the home had to offer.

They were symbolic messengers of renewal and this also represented the ritual sharing of food -- the substance of life -- and the ideal that this generosity must keep circulating.

We can all go "a Maying" by doing something nice for others or sharing a spring ritual with the one you love!