By now most of the environmentally conscious are aware of the giant swirling garbage gyre in the North Pacific, originally discovered in 1997 by Captain Charles Moore, founder of the Algalita Marine Research Foundation. Moore first published on his travels in to the North Pacific Gyre in 1999, though the media was slow to react to his tales of plastic islands, and miles upon miles of marine garbage. By 2005 major news organizations began reporting on Moore's North Pacific Gyre, and the issue gained attention worldwide. Now, a team of researchers from Algalita and Livable Legacy, Dr. Marcus Eriksen and Anna Cummins have brought a team of artists, ocean activists, journalists, and scientists to the other side of North America on an a North Atlantic expedition to look for plastic debris as part of a new research initiative, the 5 Gyres Project (5gyres.org).

Worldwide, there exist five major oceanic gyres and it is hypothesized by Eriksen and Cummins that all of these gyres will collect marine debris, much in the same way that the North Pacific does. Due to the manner by which ocean currents and tradewinds work, they form what is essentially a massive spinning vortex. As a journalist and representative of the Surfrider Foundation aboard the Pangaea Explorations research vessel Sea Dragon, reporting directly from the North Atlantic Gyre via satellite communication, I can confirm that another worldwide garbage patch exists, here, in a disperse synthetic soup we're currently floating upon. As of the time of this writing, 19:31 GMT, our position is roughly 500 miles SE of Bermuda and a 1000 miles SW of the Azores.

Since our departure last Thursday from Bermuda the science team has been collecting data on plastic density every 50-100 miles (weather permitting) as we sail easterly across the Atlantic towards Europe. With a device specifically engineered to skim the surface of the water and just below called a MantaTrawl, we have collected 12 samples on the second leg of the journey thus far. The MantaTrawl takes a 60cm. by 25 cm. sample of the ocean over a three hour period covering about 7 miles. On the first leg, from the US Virgin Islands to Bermuda, we collected 20 samples. From both legs, each sample has shown evidence plastic fragments in every trawl. Varying in the density, the samples from the first leg have already been shipped backed to Algalita labs in California. Beyond fragmented and photodegraded plastic, we've come across what are called Windrows, areas in the ocean where currents and wind patterns conspire to make 'patches' where debris collects densely. These areas, often marked by large swatches of sargassum (a plant that grows on the surface of this area of the Atlantic known as the Sargasso Sea) are where we're finding large collections of plastic, in big chunks, floating on the surface. 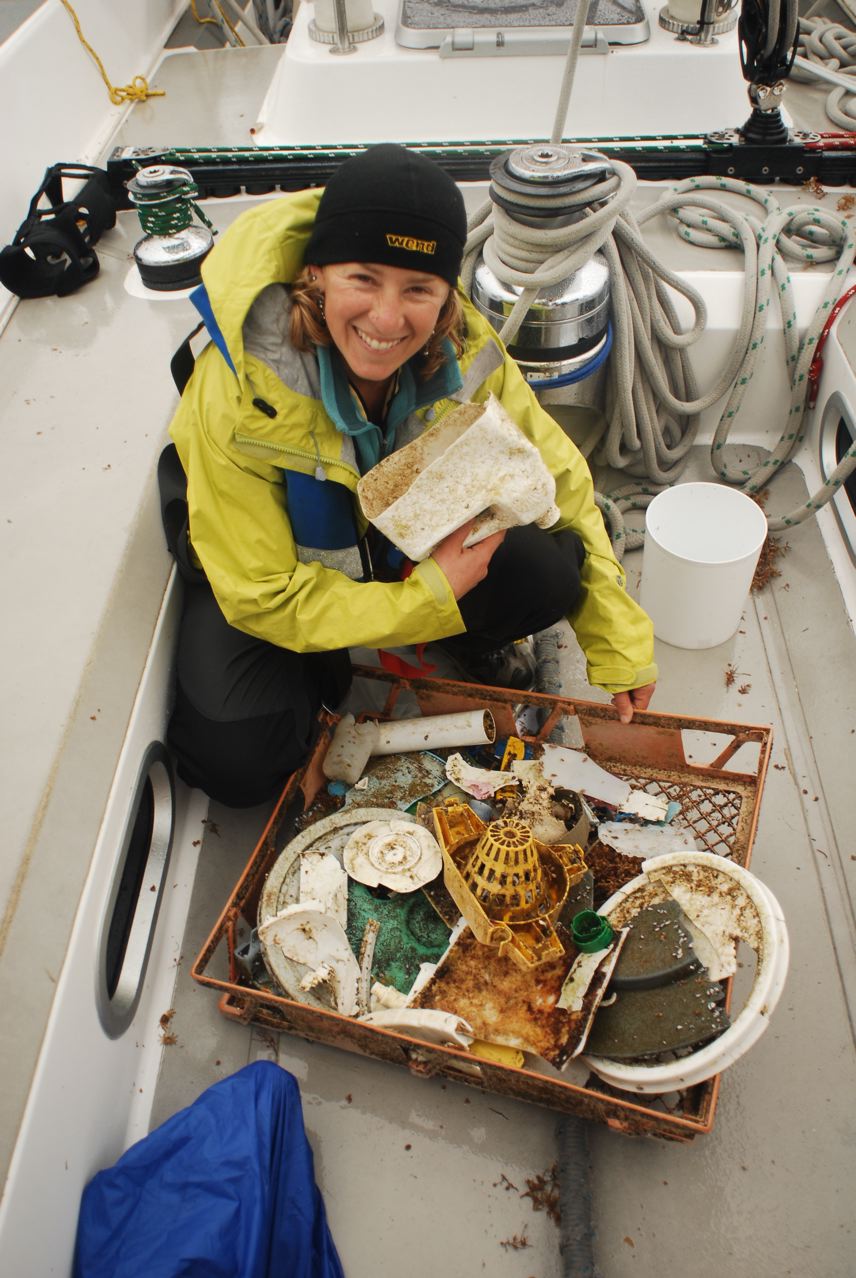 Thus far, we've found plastic milk crates, lighters, toothbrushes, bottle caps, shotgun shells, dental floss holders, buckets and bucket lids, bleach bottles, antifreeze bottles, plastic bags, plastic tubs, nail polish remover bottles, and every manner of plastic goods one would find in any grocery store across the world. As a crew, we collect this debris from the deck of the Sea Dragon with large fish nets and examine the contents. The results have been staggering. Ultimately, it's difficult to imagine the size of the problem that is now affecting the Atlantic too because our vantage is that of a needle in a haystack -- a 72 foot research sailboat amidst the vast wilderness of an enormous ocean. But what's certain, given the data and debris collected already along a transect, is that the problem of plastic in oceanic gyres worldwide is at least twice as bad as researchers knew before and is ubiquitous in the Atlantic as well.

For more information and updates on the voyage, check the useful links below: