Greg Dunn is a neuroscience PhD student at the University of Pennsylvania and an artist passionate about Japanese minimalist scrolls. While these interests may appear radically incongruous, Dunn's artwork suggests otherwise. The artist creates dazzling works of enamel, gold leaf and ink inspired by science.

Some of the works, like "Hippocampus II," give those of us who do not spend a lot of time around a microscope a look at the complex architecture of our neurons. And then there are the occasional stumpers that are impossible to decipher as neuron or nature. "Two Pyramidals," for example, look like upside down dandelions far more than, as Dunn explained over the phone, "a type of neuron found in the brain that integrate information received from their dendrites, process it, and transmit it to other cells through its axon."

In an interview with "The Beautiful Brain," Dunn explained the infatuation which spurred the unconventional project: "The tremendous knot of cells when connected in a certain way gives rise to a strange sense of “I” that is able to ponder and learn things about its environment." He continued, "It is an utter miracle, and is at the root of why we are conscious beings able to appreciate this world and all of its beauty. How can you not love it?!" We could not think of a rebuttal, so we asked Dunn if we could learn more. Scroll down for a slideshow of images. 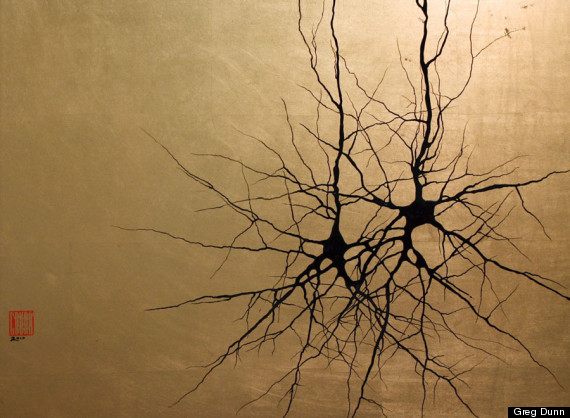 HP: How did you discover your passion for Edo period scrolls?

GD: I think it was largely in reaction to my frustration with European Renaissance period art. I think the Asian aesthetic really was a refreshing contrast to the hyper detail and almost stuffiness of European paintings at the time. There is no breathing room on a canvas, there is no negative space. Asian art was all about a minimalist representation and let you focus on and appreciate one aesthetic motif at a time. Also I had also always been interested in meditation and psychology and Sumi-e brush painting gives you a really intimate insight into the minds of painters. You can tell through their strokes how much hesitation there is in their mind. And the true masters have not only mastered brush technique, they have also mastered their own sense of keeping themselves calm. I think a lot of the greatest brush painters were also meditators, and a lot of my heroes were also monks.

HP: Who an Edo scroll artist you admire?

DG: Ito Jakuchu does a mixture of monochrome ink painting and also more meticulously detailed stuff. He mastered the traditional technique and then he took it someplace new. He really infused personality and eccentricity to it. He really represents the pinnacle of art to me, which is to respect the past and to be searching for something new.

HP: How are Japanese scrolls similar to neurons?

DG: I was screwing around one day in graduate school. All day when you are taking classes you are looking at all these micrographs of neurons stained by all of these various techniques and they are beautiful. There is a real incredible spontaneity to the randomness of the lines. One of the things I love about neurons which trees and lightning bolts or a crack in the pavement have, is a really satisfying degree of randomness in the movement of the line. This is something that is really difficult to generate with the brain. Because your brain is always trying to generate patterns and is not a very good random number generator.

I think a lot of the great Zen painting has a lot of randomness and spontaneity to it. These forms are really preserved across different scales, and the behavior of growing processes in the brain (the branching of neurons) is very similar in the way a branch grows or a lightning bolt comes. They take the path of least resistance. In the case of a lightning bolt there is all sorts of temperature fluctuations and molecular movements. And the electricity will want to come down and hit the earth in the easiest way possible. It is going to at every point find the path of least resistance. And this is happening on the molecular level too. This growing process is moving through this molecular soup and it takes these random twists and turns to get to its destination. It is fundamentally a very similar concept and I think it is a really interesting aspect of the way that nature works. 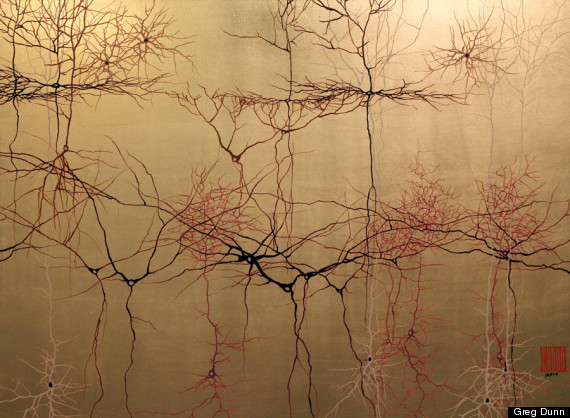 HP: Do you think the resemblance between neurons and brushstrokes are aesthetic or in their nature there is a similar essence to them?

DG: Both, really. The reason that painting neurons works in the cannon of Asian aesthetics is that it is fundamentally the same process. It is the same natural forces which are creating something that the painters for thousands of years have observed and appreciated in things observable by the naked eye. Now with the microscope we have only recently been able to see that this beauty extends to the molecular level. It extends way, way way down to these levels of magnitude that we can't really see.

HP: Can you describe your process?

GD: I am not the best brush painter in the world, but to me it is about brush painting to me and more about expressing an idea with spontaneity and clarity of mind. And that is characterized by a certain type of line. I was messing around one day blowing ink around on a piece of paper. You can get ink to spread into these tendrils that look just like neurons. The ink is following the path of least resistance just like a neuron does. It really effectively captures the essence of the neuron. I have another technique where you fill a syringe with paint. And in kind of like a Jackson Pollock style you use a movement that originates in the shoulders to get these lines that avoid hesitation in the strokes. Even though there is no brush involved, I am interested in any technique that employs spontaneity. I am also interested in the idea that sumi-e is basically a natural process, as it applies to human's at least. I think the natural state of the human mind is calmness. So when you are able to create a smooth line that is as close to a natural process as a human can get. You're trying to capture the natural molecular unfolding of nature.

HP: What can artists learn from science?

GD: A huge amount. I think that the mold of the Renaissance painter [is] both a scientist and an artist. Perspective and using opposing colors effectively are based upon the hardware of how your brain works. There is a Monet painting with an orange sun setting on a blue background, and the orange seems to sort of pop out from the page. That is chemistry. There is a lot about perception and chemistry that I use all the time.

Fundamentally art and science are ruled by the same principal. You must start any project with a clear idea of what your question is. You start with a clear idea and you follow it up with a clear hypothesis. You are trying to get to the root of this question. And when you start painting you are trying to get to the resolution of this question. If you don't have a clear foundation you will never produce something that is great. Looking at that problem from the different angles of science and art has really solidified that for me.