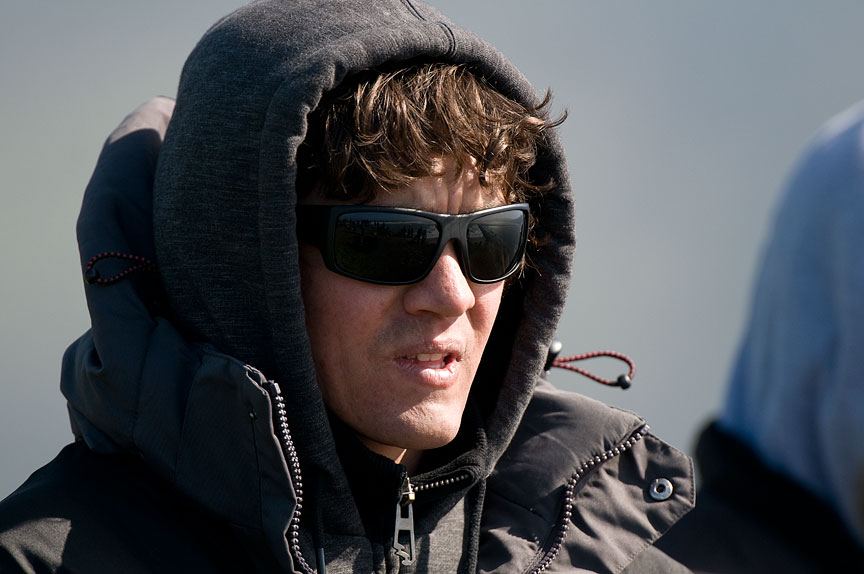 Sean Oleson contributed to this story.

Among the many talented and borderline insane big wave surfers to paddle into the world's largest waves, one stands out for his many accomplishments both competitively and in breaking new ground. He's surfed one of the largest and scariest waves in the world, Cortes Bank, and has both towed and paddled into the behemoth wave. He is one of the pioneers of paddling into the gargantuan waves that break off Maui's Pe'ahi reef better known as the infamous Jaws. He regularly gets barreled at one of the heaviest beach breaks in the world at Puerto Escondido. Most refer to him as the greatest big wave surfer on the planet. He is of course Greg Long.

In essence, Long has become the unofficial ambassador to big wave surfing, and rightfully so. Long is the only surfer to win all three prestigious big wave surfing contests in the history of the sport. Long was victorious at the Eddie Aikau Big Wave Invitational in 2009 (Kelly Slater finished in second), the Maverick's Surf Contest in 2008 and the Red Bull Big Wave Africa contest at Dungeons in 2003.

Long's competitive accomplishments are unmatched, he handles himself incredibly well, and all in all there is an overwhelming consensus amongst his peers that Long is a genuine, good person.

And while Long continues to push the boundaries of big wave surfing, particularly with paddling, Long has been making more news lately for his work in the new Hollywood surf film Chasing Mavericks that will be mass released on October 26th in theaters across the U.S.

In the film, which focuses on the late big wave surfer Jay Moriarity and his relationship with mentor Frosty Hesson, Long makes appearances as an actor and as Jay Moriarity's surf double. It's a new role for Long, who spent months in the frigid waters of Maverick's and various other shoots near Half Moon Bay and Santa Cruz playing a major part in a Hollywood film that is being distributed worldwide.

My interview with Long took place earlier this year, as filming of the movie was near completion. Long talked about many things, including his experience making the film, hanging out with the movie's star Gerard Butler, chasing a swell that hit multiple big wave breaks, how his approach to competing and freesurfing differs, and which big wave terrifies him the most. Here is an exclusive interview with arguably the greatest big wave surfer on the planet, Greg Long.

Greg: I'm doing fantastic, I'm actually back home in San Clemente putting a little order in life getting caught up on all the things I usually neglect when I'm off chasing waves. But we just had our first really good swell of the season, uncharacteristic but nevertheless it was still fun. We had a great session over in Hawaii and then I followed it over to your guys' neck of the woods and surfed Maverick's for a couple days.

Cyrus: Did you go down to Todos Santos also?

Greg: I didn't make that part of the leg. I was doing some filming for the Chasing Mavericks movie so I had to stay put there. But my brother carried the flag for us down there and had some fantastic waves, so I had to miss out on that leg but two of the three wasn't too bad so I was pretty content.

Cyrus: Your brother who you're referring to is Rusty, who is also an amazingly talented big wave surfer, so he represented Todos Santos. Is it possible to do all three legs? Is there enough time in the window to go from Hawaii to do either Jaws or Waimea, then to Maverick's and from there to Todos Santos or is that just too much?

Greg: No, it's totally doable. We did it back in 2007, I think. The photographer we were travelling with on this particular trip Jason Murray, who we do a lot of our big wave missions with actually did all three where we surfed Jaws on the fourth, Maverick's on the fifth, and I had to stay and film Maverick's again on the sixth. Where he ended up catching a flight overnight and went down and met up with my brother and surfed it on the following day as well so he did all three. It just depends on the timing of the swells, sometimes on the west coast it might hit at similar times where you'd just rather pick one and get the peak of the swell at one or the next. But if timing coincides there's no reason why you can't do all three, or even more if you're that ambitious to follow it down to South America or somewhere.

Cyrus: That's true, it could even go that far south. Going back to what you mentioned just a moment ago, the new movie Chasing Mavericks that stars Gerard Butler who I have previously interviewed. He spoke quite a bit about the movie. At the time they didn't have a title yet and he hadn't starting filming his shoots. He was promoting a different movie called Machine Gun Preacher at the time. We talked a lot about the movie and right after that he started actually making the appearances in Santa Cruz, then up in Half Moon Bay, and Maverick's. Then it was all over the news that Gerard Butler apparently went to the hospital because he suffered at least a one wave hold down, if not two. You were there on the scene. What happened that day with Gerard Butler? What happened with that wipeout that led him to go to the hospital?

Greg: We were right there in the water. It was myself, Zach Wormhoudt, and Peter Mel. We actually all have small little acting roles in the movie. This particular scene they wanted us paddling out in the inside with the rocks in the background. It was a really controlled, well, it's the ocean so it's never a controlled environment.

Cyrus: It's all relative.

Greg: Yeah exactly, we're all very cautious in our approach out there knowing his surfing ability. He only started surfing a few months ago. We had done the shot prior a couple days in similar conditions and this particular morning it was kind of high tide, the swell was dropping and there was some dramatic explosions off the rocks which is what they want to get in the back. Then out of nowhere a random set kind of missed the whole outside peak and shifted wide to the inside where we were and doubled up on the inside section and landed right on us.

My hat's off to the guy. For someone who's just started surfing, I don't know too many people who could have come out relatively unscathed the way that he did. He went to the hospital, that was just safety precautions basically ordered by production to make sure that he was in fact OK and that he hadn't ingested any water rather than run the risk of infection or the far-fetched idea of possible secondary drowning. So that was basically all just standard protocol. He wanted to keep filming that day.

Greg: Again, my hat's off to him. He took four solid double up waves on the head, got pushed right in front of the rocks before the water safety was able to actually get to him. Each hold-down he was down for so long that they never had time to pick him up. We were right there right next to him and it was a solid wave. Again for someone just starting to surf it would have been a terrifying experience, and as he explains it, the closest near-death experience I think he's ever had. So yeah, but all's well that ends well I suppose.

Cyrus: That's a crazy story. When I interviewed Gerard Butler it was in person. I was talking to some publicists before the interview started and they were telling me about a major bender he allegedly went on the night before. When I met him, I thought he looked like he was just sweating booze. It was comedy. He just looked haggard, hung over and not into it. Until the focus of the interview turned to surfing. Then he just lit up and suddenly started talking forever. He just seemed really into it and at the time he had just started learning to surf. Like you said, he's really a beginner. But now, in the situation you presented where just this freak set comes in, for someone like him who's a beginner versus someone like yourself who's one of, if not the, greatest big wave surfers on the planet, how do you two differentiate your approach to a wave like that coming in? How did you handle it so well where as he was basically just getting slammed?

Greg: Well, it goes back to how what we do is all relative. This is the environment that I've grown up in and that I have immersed myself in for the last, well, over 10 years now. You know, intensely. His is the acting world, so basically it would be the same as me showing up on set the first day going, "What the hell is going on here?" and being so nervous and not really understanding. Then him looking and saying, "Hey Greg, take it easy, relax. This is what we're looking for," and just giving me the pep talk. The couple months while he was working on the film we were surfing with him on a regular basis and talking big wave stories endlessly. He put his heart and soul into immersing himself into being the character of Frosty. He did a fantastic job. If he had not studied so diligently and listened to what we were saying and how he needs to act in order to handle those situations he very well could have drowned that day. So that's really the difference. It's something that we've been doing for years on end where he's just beginning at it. If you put me in your seat right now and said, "Hey Greg, come host an interview," I would be sounding like a blubbering idiot. You know? But if I spent a couple of months in the seat there with you I could probably pull it off.