In the days since Harvard economist Gregory Mankiw inflicted his paper, "Defending The One Percent," on the world, Paul Krugman and others have written thousands of words ripping the paper to shreds. But this can also be accomplished with just one chart.

Mankiw, a former top economic adviser to President George W. Bush and Republican presidential candidate Mitt Romney, makes many outrageous claims in his paper, including that the wealthiest Americans are simply more productive than everybody else and that their money-making smarts are genetically inherited -- so tough luck, Poors, you can't fight Mother Nature. New York Magazine's Jonathan Chait has a two-word retort to these arguments: Paris Hilton.

One less-ridiculous argument Mankiw makes is that the rich are richer because they are better educated and thus more highly skilled. The growth in income inequality over the past few decades is mainly the result of massive technological changes that rendered old job skills obsolete, and only the educated have been able to keep up, according to Mankiw.

This argument sounds a little more reasonable, at first, although one obvious counter is that the already fabulously wealthy naturally have an easier time getting good educations, helping them cement their position at the very top of the income chain forever.

If Mankiw's claim is correct, then these two lines should track each other closely. But they don't. (Story continues below chart.) 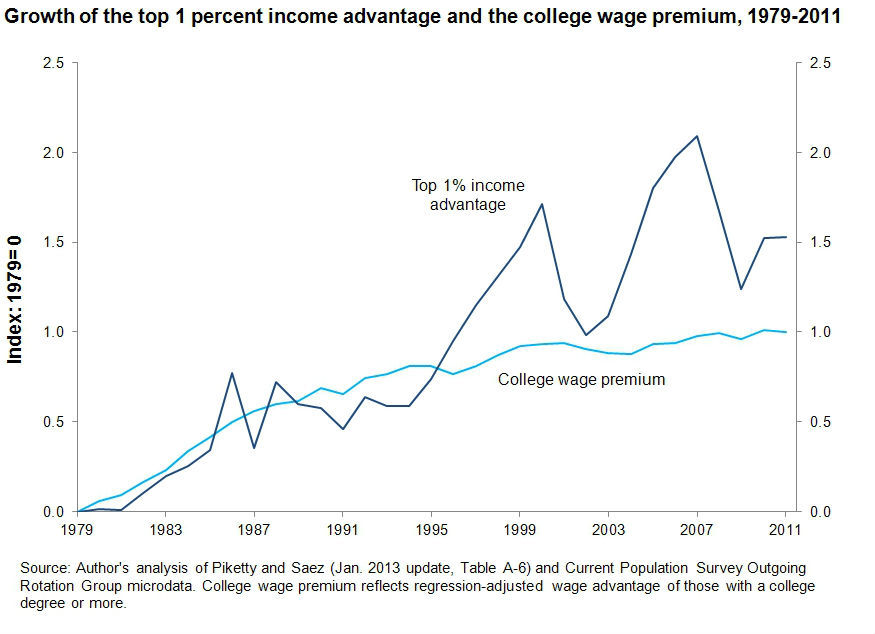 What happened in the mid-1990s that might have led to this gap? Why, it is the dot-com boom, which mostly benefited the very wealthy. But even after the dot-com bust, the top 1 percent kept their income advantage, which recovered as the stock market recovered. Their advantage faded again with the financial crisis, but the 1 percent never lost their lead over the college-educated. As the stock market rebounded after the crisis, the 1 percent's wide advantage over the college-educated rose again.

In an earlier paper, EPI economists asserted that gains in "capital income" -- income from investments -- account for about a third of the growth in the 1 percent's share of the total income pie in recent decades. So the 1 percent aren't simply taking advantage of their better education and higher productivity -- they are increasingly taking advantage of low tax rates on investment income to get richer and richer in financial markets.

This new method of extreme wealth-generation is the result of the runaway "financialization" of the world, with banks and financial markets being de-regulated, increasingly complex and expensive financial instruments being created and tax rates on investment income being slashed. It suggests that most of the rise in inequality is not due to the unique qualities of the 1 percent, but to their ability to game the system -- to "seek rents" in the economic lingo -- to enrich themselves.