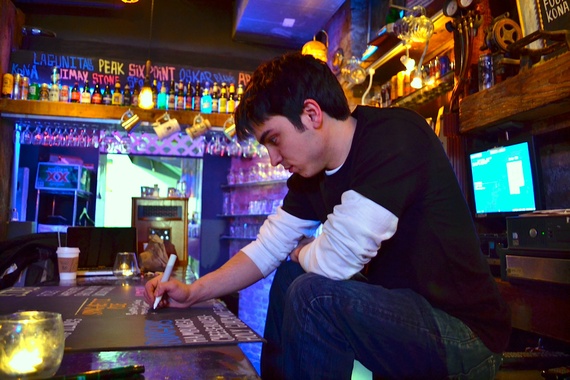 When we think of a young entrepreneur, we typically picture a headphones-wearing millennial in jeans and a sassy t-shirt, hunched over an Apple laptop deeply focus on the screen with one hand scrolling the computer while the other reaches for a bag of Funyuns, kale chips, or whatever the food fad of the month is.

The tech scene, filled to the brim with young, radical startups that are launched and operated by 20-somethings, has pointedly sculpted our vision of Generation Y and blinded many of us to the vast accomplishments and spectacular strides other young entrepreneurs in more traditional industries are accomplishing everyday.

If we can expand our thinking of what a young entrepreneur is, we can look past the latest 20-something to hit the news circuit after selling his dot.coma startup for more money than the average American will make in a lifetime, and we can see millennial entrepreneurs are doing much more for the economy than just what comes out of Silicon Valley.

Enter one such establishment, the bar Augurs Well, founded in 2011 by a then 22-year old New York native, Greg Nardello.

No, this isn't a gelato bar, quinoa salad bar, beauty bar, or any other non-alcohol serving establishment using the word 'bar' in its title simply to attract a more trendy crowd. It's a down to earth, all-american made bar -- no funky bells or interactive whistles here, folks. And although it sits next to one of the most infamous speakeasies in the city, and is located at no place other than St. Mark's Place, Augurs Well isn't trying to be anything more than a good ol' beer bar.

It totes a simple yet classic layout, with a large prominent bar area, a handful of stools and booths, and an awe-inspiring selection of beer on display. With reasonable prices and traditional bar food, it's not poised for one type of customer over another. The ambiance is the antithesis of pretentious and on any given day, the clientele ranges from out-of-towners, to a tattoo-covered, leather-jacket wearing couple, a middle-aged impromptu group, and a mixture of NYU graduates. It's not a frat-boy sports bar, and it isn't railing in customers by repeatedly blasting the top 10 songs on the chart. Instead, it's a place where a down-to-earth bartender will have a whole hearted conversation with you, amongst a backdrop of Pandora playlists consisting of Johnny Cash, the Beatles, and 90's hits.

Why would this be any millennial's dream project? To answer that, I sat down with Augurs Well owner, Greg Nardello, to get his take on what it's like to be a millennial entrepreneur in a typically non-millennial industry.

Let's start with the name. Why Augurs Well?
"It was first called the Burger Shop. Then I realized no one wants to be at a place called 'Burger Shop' at 10 p.m on a Friday. Picking the name for the bar was actually one of the hardest things about opening it. It took a while, and I ran different names by his regulars. Eventually I settled on Augurs Well. (The phrase Augur Well is used as another phrase for 'bode well' and is typically defined as "To foreshadow a successful outcome, indicated by some circumstance or event.")

What are some of the challenges you face operating a business like this at your age?
"My age has most of an impact when it comes to how vendors and other business people talk to me on the phone verses in-person.

Talking on the phone, presumably before the other person know my age, is pretty straightforward. But once people such as beer reps come in, they'll often come straight up to me, tell me they are looking for Greg, the owner, and then are shocked to learn I'm the person they came in to see. They somewhat hesitate and you can just tell by the looks on their faces. It all works out in the end, but sometimes it feels like it's bordering on age discrimination."

Your employees all seem to be around your age. Is that to attract a certain clientele?
"I hire younger people simply because I like to give younger people a shot. When it comes to customers, we tend to get a mixed group, but my favorite days are when the craft beer crowd rolls in."

What was your inspiration for opening a bar, as opposed to going the dot.com route like so many people your age?
"My father. He had different businesses, and everything he had he always earned. It'd be hard to do this without him, and without what he taught me growing up.
He owns a bar too and was always tough on me if I did something incorrectly - He just didn't put up with it. Seeing the bar business from that end, and with his influence, I learned to respect the industry and the value of doing things right."

What advice would you give other millennial entrepreneurs who are interested in more than the standard internet startup, and, say, looking to open a bar?
"I'd say be prepared to work harder and more than you can even imagine. Being that this is the first and only bar I have opened, I can only speak from my experience here. The beginning is the toughest, the first year or so I was working around 100 hours a week and making little money.

It definitely becomes your life. Weekends are your most busy times, so you don't have time to hangout with your friends or your significant other as much as you would like to. Make sure you're committed before you decide this is what you want to do.

If you are looking to open a bar because you think it's going to be fun, you're getting into it for the wrong reason. With that being said, I wouldn't trade my last 3 years here for anything. It has definitely been the most gratifying experience of my life."