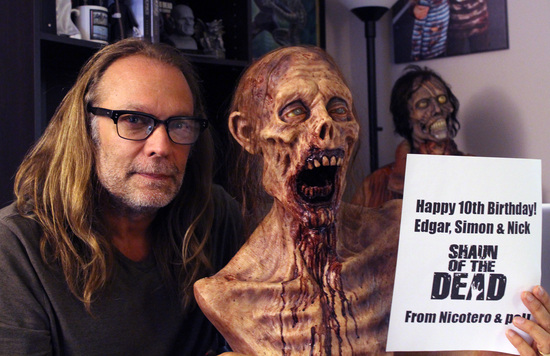 Greg Nicotero has a lot of blood on his hands. After living it up amongst reanimated corpses for nearly 30 years, the special effects master and frequent director of The Walking Dead is a superstar within the zombie genre.

After launching his professional career on George A. Romero's Day of the Dead (1985), under the tutelage of another effects icon, Tom Savini, Nicotero has become one of Hollywood's most sought after artists. He cut his teeth on gross-out ghoul work, but he and his company KNB EFX Group (formed with Robert Kurtzman and Howard Berger) are often behind the best-looking prosthetics, creature and makeup work across genres.

But Nicotero is still a zombie guy. And when The Walking Dead returns for Season Five Oct. 12, he'll be in the director's chair for the premiere. As much as it's tempting to ask what viewers have to look forward to at Terminus, or who will survive the season, I wanted him to look to the past instead.

Although we've gotten used to living in a pop culture landscape filled with Walkers, the zombie genre was still crawling out of its grave once more back in 2004. Creator Robert Kirkman had unveiled The Walking Dead comic October 2003, about a month after Max Brooks' Zombie Survival Guide was published. The Dawn of the Dead remake was running hard and 28 Days Later infected audiences.

Then, on Sept. 24, 2004, Shaun of the Dead opened in the U.S. For those who hadn't been able to somehow catch their show Spaced, the movie introduced Americans to director Edgar Wright and stars Simon Pegg and Nick Frost. Written by Wright and Pegg, the rom-zom-com paid homage to the zombie works of Romero, Savini and Nicotero. It also showed a zombie movie could have sharp dialogue and developed characters without skimping on the gore or horror elements.

Nicotero would actually go on to work with Wright and Pegg in Romero's Land of the Dead, where the duo had cameos as flesh eaters. So it only made since when I reached out to him via email to ask the zombie guru about the tenth zombie-versary of a modern classic.

What were your initial reactions when you first saw Shaun of the Dead?

I was turned onto the film by Quint and the AICN gang. I was in Austin filming Sin City when I had heard about the movie and how it was going to "play to my sensibilities" in terms of my love for zombie movies. I was a bit down in the dumps in terms of the state of the zombie movie at that time (aside from 28 Days Later). Dawn of the Dead (the original, of course) made me want to get into the make up effects biz so when Shaun came out ... it not only played tribute to the genre but respected its roots. To this day I am proud to have been one of the first voices to sing the praises of this amazing movie.

Did they capture the spirit of your & George's zombies/universe?

Not only did they capture it, but by recreating gags we did on Day of the Dead, they tipped the hat to the genius of George and Tom Savini. All of the zombies have contact lenses, look sufficiently gruesome and, in Romero fashion, pay tribute to who they were before they died. That is a huge (and quite funny) aspect of the film that ties it to George's world fantastically ... especially when Shaun looks at "Mary" and says, "She's drunk," only to have Ed take a photo.

What impact has the film had on the zombie genre?


In my opinion Shaun of the Dead did more for the zombie genre than any other film in the last 15 years because of its originality. It wasn't a remake, it wasn't a video game-turned-movie and it wasn't a sequel. It was wholly its own entity -- and is frightening, funny and inspiring at the same exact moment.

Have you ever thought about doing a Shaun Easter egg in TWD?

Do you have a favorite moment from the film?

I don't even know where to start: "You've got red on you," "his arm's off," "how's that for a slice of fried gold" montage -- I can't control my fingers as I type this; there are so many. I had the privilege to make up zombies for the LA premiere and even attended a screening in Austin at the Alamo Draft House with the guys, so to be able to introduce them and bring them on stage to present this film gave me one of the highlights of my career.

This films resides proudly on the NICOTERO TOP 10 OF ALL TIME!!!!! Thank the maker for Edgar, Simon and Nick! Congratulations on 10 years!