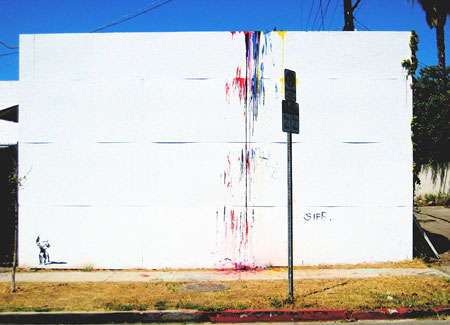 The best part of my iPhone4 is photographing street art from Echo Park to the Lower East Side and posting it on All City, a graffiti app that finds your location anywhere on the planet and then tells you if there is a Banksy or Neckface nearby. On my street art safaris, I started noticing these simple, beautiful three-color paint drip pieces on newspaper boxes and walls around NYC and L.A. I found out they were created by artist/filmmaker Gregory Siff who is doing them as promotional pieces for a film he is making. Talk about guerilla/subliminal advertising! "The three colors is a way for me to express the way a character in a film that i wrote, Vinny, sees the world," Siff tells me. "The art is a street campaign to an eventual fruition of the movie painT, a modern day telling of the life of the artist Vincent van Gogh." Siff plans to play the lead role and keeps jetting from coast to coast, painting his unusual and unique street campaign everywhere he can. "Every time I drip, color or paint something I feel the passion, intensity and heart of van Gogh burning through these primary colors," he says. Stay tuned. --Peter Davis